by Colin Szeto from San Diego, California in United States

It ain't as bad as you think. It will look better in the morning.

“A real hero, a hero who deserves biography, autobiography or memoir is someone who may attract attention but directs that attention beyond themselves to something greater”(Harper 6). Charles Harper’s essay “How Should We Choose Our Heroes?” argues a worthy hero should use his wealth, publicity, and power to progress civilization instead of bathing in his own resources. Heroes possess the courage to give without expecting anything in return; they have the compassion to understand that people want to be treated as how they would like to be treated themselves. A hero is a person who runs back into a burning building to rescue others, who gives back to the community, who donates blood to hospital patients. Additionally, to me, a hero is someone who gives unconditionally even when they are not asked. Further, a hero puts his life on the line to save others. People will start believing in a hero who is always there to protect and care for them. Most importantly, a hero has the courage to stand up for what he believes in spite of humiliating criticism. Courage to fight for one’s country and what one believes in, and genuine caring for others' well-being is what a hero stands for. 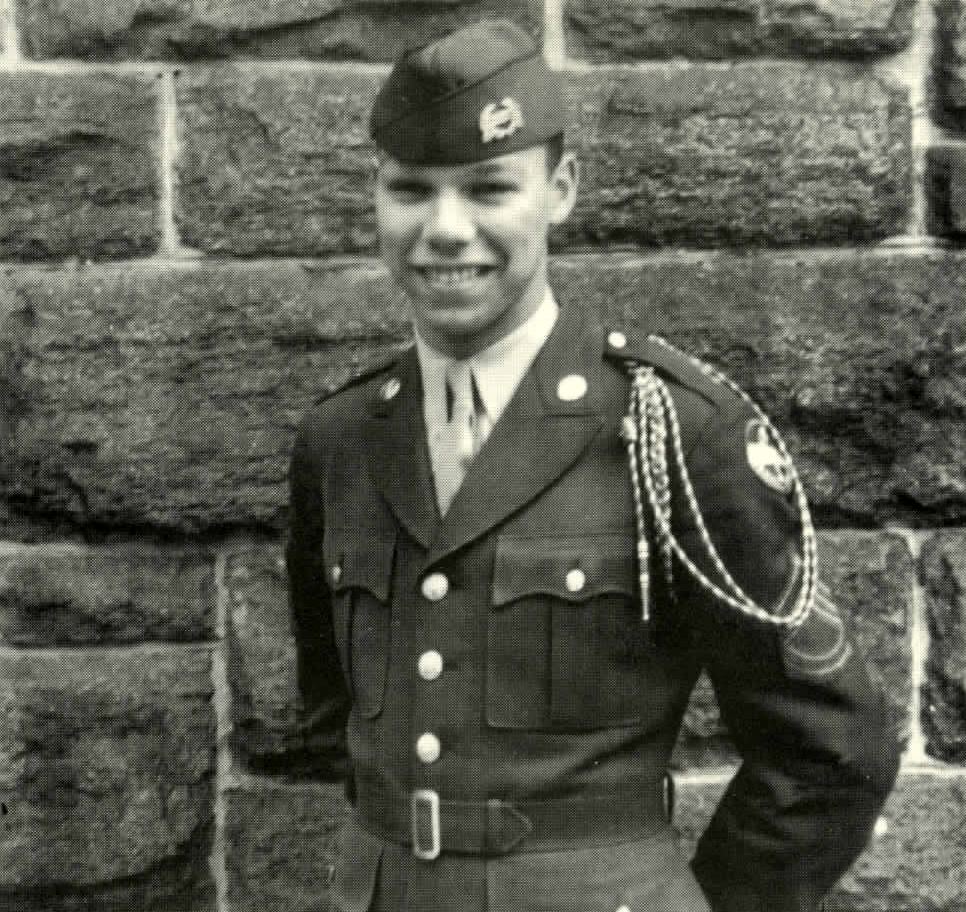 Autumn 1954: Colin Powell in his ROTC uniform.https://www.achievement.org/achiever/general-colin-l-powell/Colin Powell is such a hero. He courageously served his country and continuously possessed the compassion to care for his fellow Americans. Colin Luther Powell was born in Harlem on April 5, 1937. His parents came from Jamaica and they emphasized the importance of education and personal achievement to Powell at an early age. Powell never forgot the people who shaped his early life, like his first boss, the immigrant Russian Jewish toy store owner, who insisted he should get an education to move forward or his high school English teacher who scared him into working harder than he would ever work at school. Powell joined the military after college and received many military decorations for his courageous services. Powell was the first black man to hold many positions of power in the United States military and government. Powell secured what he called a "dream job": an appointment as a prestigious White House fellow in the Office of Management and Budget under director, Caspar Weinberger and his deputy, Frank Carlucci, two men who would help further shape Powell’s career. He was the first African American and the youngest man ever to serve as Chairman of the Joint Chiefs of Staff, National Security Adviser, and Secretary of State. Even retiring from the military and the government, Powell continued to serve and care for his fellow Americans by speaking at schools and leadership events about the lessons he learned from his years of service and encourage them to be better than himself. Colin Powell’s courageous services for America and his compassion to better the lives of others make him an inspirational American hero.

“Powell was wounded in Vietnam when he stepped on a punji stake, a sharp stick designed by the Viet Cong to hobble soldiers. Powell was awarded a Purple Heart, and later that year he received a Bronze Star. He returned to Vietnam as a major in 1968 with the Twenty-Third Infantry Division. During that year, he was injured in a helicopter crash, and he received a Soldier's Medal for bravery in helping rescue men from the burning wreckage”(Abbott 5).

Powell stationed in Vietnamhttps://www.wearethemighty.com/articles/that-time-colin-powell-saved-crash-victims-by-tearing-burning-metal-with-his-bare-handsCourage is found in the military recognition and awards Powell has received. Powell never stopped and continued to risk his life to fight for what he believed in. Throughout his military career, Powell risked his life repeatedly to save many of his soldiers from dangerous and hostile battlegrounds. His unwavering courage led him back to the battlefield time and time again and earned him many of the most honorable military awards and hero status. That same courage persisted with him when he became the Secretary of State. The media mocked him publicly for his invisibility to the world, accusing him of not traveling enough to make “more waves out there in the world.” His response was: “My own solution to the problem of finding the right balance [between staying in the US to serve the President and trotting around the world]  has been shaped by my military training and experience ....'Where should the commander be on the battlefield?'  The answer: 'Where he can exercise the greatest influence and be close to the point of decision”(Powell 56). Powell feels strongly that one should “exercise the greatest influence and be close to the point of decision." Even when his unconventional actions are criticized by the media, he was never dissuaded from executing what he believes is the right thing to do. One can only succeed and be looked up to if he is committed to accomplishing what he stands for. Courage is what provides Powell with the drive to continue to serve his country. 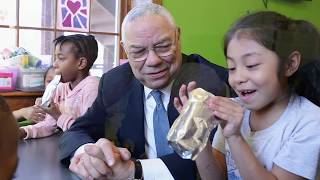 Powell with children from his non-profit, America's Promise Alliancehttps://www.popflock.com/learn?s=America%27s_Promise_AlliancePowell has the compassion that it is necessary to repay the kindness he was given and shown as a child through his non-profit organization and the motivational events he speaks at. Powell cares for the future of America. He continuously strives to repay the kindness back to his community by creating environments for children to flourish and to achieve new heights. He extends his kindness to all, as he wants to ensure children are provided with the opportunity he was given when he was younger. He founded the youth organization America's Promise Alliance:

“America’s Promise focuses on five basic promises we must make and deliver to our children. We promise them a responsible caring loving adult in their lives to guide them along the right path. Where the family is unable to do that, we need to provide mentors. We promise them safe places in which to learn and grow, protected from the negative influences encountered in too many of our communities. We promise our kids a good education with marketable skills. Finally, we promise them an opportunity to serve others so that they grow with the virtue of service embedded in their hearts”(Powell 275).

Powell strongly believes that without love, education, guidance, and opportunities he received, children are unable to succeed at the level he did. He wants to ensure children who have gone through the struggles and obstacles he faced also receives the opportunity to succeed like he did. He created the youth organization to foster leaders like himself, to ensure that future generations can carry on the legacy of America. Powell also applies the same kindness and compassion towards his staff. In one of his staff meetings, he shared with the staff his encounter with the garage attendants: “You can never err by treating everyone in the building with respect, thoughtfulness, and a kind word… Every one of our employees is an essential employee. Every one of them wants to be viewed that way. And if you treat them that way, they will view you that way. They will not let you down or let you fail. They will accomplish whatever you have put in front of them.’”(Powell 47). With this kindness and compassion, Powell can mobilize his staff to maximize efficiency and gain their respect, making him an admirable leader. Workers surrounded by a caring environment will give their absolute best in any situation. Powell's sincere kindness towards others, children and adults alike, and his humbleness make him a beloved leader and help him in achieving hero status.

Powell's courage to fight for his country and what he believes in, and his genuine caring for others' well-being are what make him heroic. Powell is never afraid to fight for what he believes in, both on and off the battlefield. Powell is always looking for ways to give back to his staff, his community, and his family. The creation of America’s Promise Alliance ensures Powell will foster leaders like heroes before him. Powell’s kind words will always resonate his troops and staff, that when people feel valued they have nothing to lose and everything to gain. Powell's unwavering courage and efforts to better others have inspired me to help and care for others around me. As a leader, it is Powell’s job to put his followers first, “A real hero, a hero who deserves biography, autobiography or memoir is someone who may attract attention but directs that attention beyond himself or herself”(Harper 6). Powell even featured this idea in his own book It Worked for Me, In Life and Leadership: “Always remember that celebrity is bestowed on you by the public; use the influence it gives you for worthwhile purpose and not just to pump up your ego. In other words, use your position for good, but don’t let it go to your head”(Powell 202). Powell explicitly exemplifies that he will only use his power and influence to benefit others. Powell’s understanding of the criteria of heroes makes him an exceptional hero and role model for generations to come.

Harper, Charles. “How Should We Choose Our Heroes?” MY HERO, 2017 The MY HERO Project, myhero.com/TeachersRoom/Show/9.

Powell, Colin L., and Tony Koltz. It worked for me: in life and leadership. Harper Perennial, 2014.

America's Promise Alliance - This website contains all of the necessary information one needs to understand about Powell's greatest project, the American Promise Alliance non-profit organization.
Colin Powell commissions ROTC cadets - This article is a quick snippet into Powell's connection with the ROTC program. A very influential program in Powell's life, the ROTC program helped Powell kick-start his very successful career.