by John from Vermont

Crazy Horse was a natural leader in war, but was also very kind to his people. After a hunt, or whenever he had some extra food he didn’t need, he kept only what he needed and gave the rest away to people who couldn’t easily provide food for themselves. After the Battle of Little Big Horn, Crazy Horse was faced with a very tough decision. He could either stay off a reservation and die fighting (which was what he wanted to do), or go onto one and live. Crazy Horse did not want to live on a reservation because that meant he would be closely guarded and basically locked up. But he always thought of the people first, so, sadly but truly, Crazy Horse led his people onto the reservation of Red Cloud. Whenever I think of Crazy Horse, I will remember that great act of caring and kindness.

Crazy Horse was not only a brave fighter, but he was brave enough to go against the entire U.S. Cavalry and their firepower. About 2/5 of Crazy Horse's warriors had guns and they weren’t very good guns compared to the Cavalry rifle called the Winchester. He was very brave to challenge the U.S. with such little firepower. Once, when Crazy Horse was a boy, his tribe was warring against the Crow Indians and was being beat badly by them. Curly charged forward and killed two men, took three coup, and basically turned the momentum of the battle in the Sioux’s favor. He was very brave to do that. In the Battle of Little Big Horn, Crazy Horse was brave enough to stand up to the many young warriors who wished to win war honors by fighting one-on-one rather than use strategy or fight together. Crazy Horse could’ve been killed by his warriors because they wanted to charge forward without a strategy. They could’ve charged forward for individual honor and recognition.

Crazy Horse was very clever and smart in his fighting strategy. Even the Indian scouts who worked for Custer knew he was clever, because they had fought Crazy Horse before in battles for Powder River Country. Because they had fought Crazy Horse before, that saved them many times. Crazy Horse attacked in Custer’s front where they numbered the most, then sent a small party around the back. Because they were attacking at the back, men from the front had to pull back to fight in the back. The flanks were nearly unguarded. Crazy Horse quickly took full advantage of the mistake and basically bashed the flanks apart and the soldiers had to fight hand-to-hand (which they were not very good at). Crazy Horse obliterated the cavalry men and only one horse lived. Crazy Horse was obviously a great strategist.

Crazy Horse was a true American hero. He stood up for what he believed in and fought with determination that has no comparison. He loved his people, loved being free, and hated prisons and being locked up. He was respected by nearly the whole reservation that he lived on and many others. 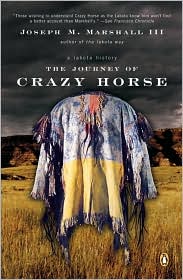