"The camera is an instrument that teaches people
how to see without a camera."

Dorothea Lange was a natural photographer in the truest sense because she lived, in her words, "a visual life." She could look at something: a line of laundry flapping in the wind, a pair of old, wrinkled, work-worn hands, a bread-line, a crowd of people in a bus station, and find it beautiful. Her eye was a camera lens and her camera--as she put it--an "appendage of the body." During her last illness, as a friend sat near her bed, she suddenly said to him "I've just photographed you." Lange had engaged in this camera-less sort of photography for decades, from the time she was a young girl, and it served as both the foundation of her art education and her first apprenticeship. 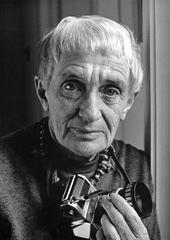 Bored and disillusioned with school, she would often cut class and go walking through her neighborhood, the lower-east side of New York. She would make herself as unobtrusive as possible, and look at things and people. Down-and-outs of the Bowery, bustling marketplaces, the Jewish ladies in their schechtels, or black wigs.

Although she was never able to get rid of the vestiges of polio, Dorothea dropped the memory of her father almost completely. She took her mother's maiden name, Lange, as her own last name, and refused to speak of her father, even to her own children.

The pain of her childhood, however, gave her a fuller sense of what suffering meant, and later on, when the government hired her to document the effects of the depression, it deepened her compassion for the destitution and despair that she saw all around her.

She would walk into camps, where homeless pea-pickers and refugees of the Oklahoma dust bowl were scraping by, sometimes starving to death, and talk to them until they felt comfortable enough to have their pictures taken. Her limp, she thought, created an instant rapport between herself and her subjects. She said that people trusted her more because she didn't appear "whole and secure" in the face of their poverty and insecurity.

Lange was born May 26, 1895, in Hoboken, New Jersey, where two painful events left indelible marks on her life.

When she was seven years old, she contracted polio, which left her with an obvious limp. The neighborhood children made fun of her and even her mother, Joan, acted ashamed of her crippled daughter.

Then in 1907, when she was twelve, her father walked out on the family. They neither saw or heard from him again. They moved into the home of Sophie Lange, the children’s maternal grandmother, and great-aunt Caroline. Joan took a job as a librarian in Manhattan. It was during long walks through downtown Manhattan to meet her mother after school that Dorothea discovered a wealth of visual imagery and decided that she wanted to take photographs.

Dorothea was fiercely independent. Instead of becoming a teacher as her mother wanted, she went uptown to the studio of a famous portrait photographer, Arnold Genthe, and asked him for a job. She was hired, and her life's work began. She learned how to set up a camera and studio lights, met many rich and famous people, and studied the artistry with which Genthe portrayed people: he didn't just snap their picture; he seemed to make the camera understand the people. This sense that an understanding of a subject was essential in making a portrait was truly the artistic part of photography, and something that Dorothea would take with her for the rest of her career.

Although she got her start and made most of her money taking portraits of wealthy people, Lange preferred the deeper challenge of photographing the real human condition. Wherever there was social upheaval, or quiet suffering, Lange was there with a compassionate eye to record and report.

During the depression, the government created work for writers, scholars and artists through various documentary assignments, and Lange was fortunate to get such a position. She took pictures of the labor strikes in San Francisco. She travelled to the deep South with her partner and husband, Paul Taylor, photographing out-of-work sharecroppers and their families. She went to Oklahoma to take pictures of dust-bowl emigrants, and went up and down California, meeting and photographing the homeless families who had come in search of work. During this time she took "Migrant Mother" which was to become her most famous picture.

Following the attack on Pearl Harbor, she took heart-rending pictures of the Japanese families as they were evacuated from their homes and sent to prison camps.

She was disgusted that the government would lock people up not because of anything they had done, but solely because of their Japanese blood. She recorded the San Francisco shipyard workers, taking advantage of the war and the need for ship-builders to make their first real wages since the depression began.

By the 1960s, Lange was a nationally-known photographer who was surrounded by an extensive network of family and friends. She was also famous (on a smaller scale) for her

Thanksgiving dinners, which she spent weeks planning for and preparing, and which culminated in huge gatherings where the ritual would begin with a reading of the proclamation of Thanksgiving. In 1965, the last year of her life, Dorothea Lange was honored by a retrospective of her work at the Museum of Modern Art in New York City. Elizabeth Partridge, daughter of photographer Rondal Partridge who worked as Lange's assistant for many years and whose family Lange took into her own, has written about this remarkable artist in the biography Restless Spirit: the Life and Work of Dorothea Lange. Dorothea Lange died October 11, 1965.

Women Come to the Front - Women artists and WWII, from the Library of Congress online exhibition
Ibiblio.org - Home to one of the largest "collections of collections" on the Internet, ibiblio.org is a conservancy of freely available information, including software, music, literature, art, history, science, politics, and cultural studies.
Photos from the Farm Security Administration-Office of War Information ("FSA-OWI") - These collections of images are among the most famous documentary photographs ever produced. Created by a group of U.S. government photographers, the images show Americans in every part of the nation

Thanks to Elizabeth and Rondal Partridge for permission to use his 1965 portrait of Dorothea Lange. 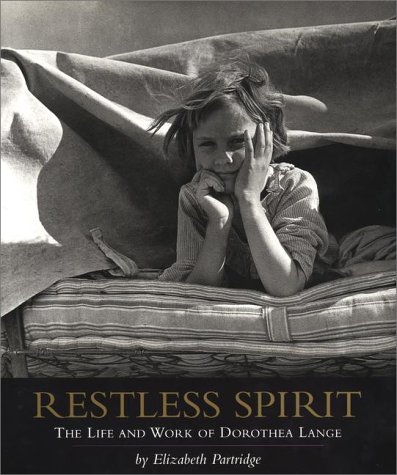 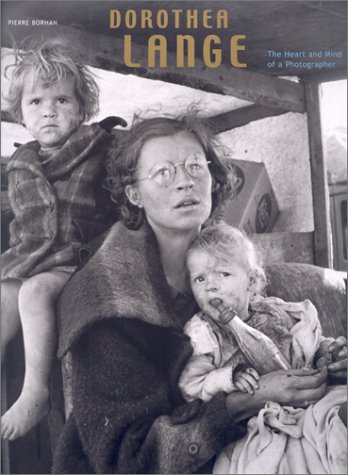 Dorothea Lange: The Heart and Mind of a Photographer
Pierre Borhan