by Layla from San Diego 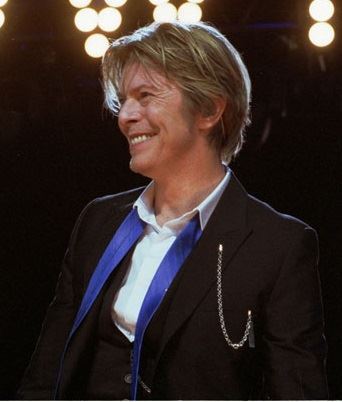 A hero is someone who helps people understand the deeper meanings of life and who remains a respectable role model for people all over the world. It’s a term that can easily be used to define almost anyone and it remains a flexible term with limited boundaries; nevertheless, it is still a word with purpose and has a strong meaning when instilled into the hearts and minds of people. Even though the term is versatile and, with the correct evidence, could define anyone, it still has a boundary point between what can and can’t fit into the category of a hero. What isn’t definable as a hero, is anyone that wouldn’t mind making extreme and selfish sacrifices in order to support their own opinion of morality. Despite this, heroic figures have spanned all throughout history, and one hero who swept his generation off their feet is the world famous David Bowie, who created a new era of pop and electric mod for late Twentieth century generations. His nickname, “The Pop Chameleon,” perfectly enclosed his unique aptitude and colorful ensemble, leading him to the Rock and Roll Hall of Fame. Being heroic isn’t always running around town and blowing up villains, for a real-world hero would be something closer to someone that cares about people, and isn’t afraid to back down from their beliefs; David is someone that not only fit the criteria of a hero, but who also stayed strong in the wake of prejudice for him and his believers. 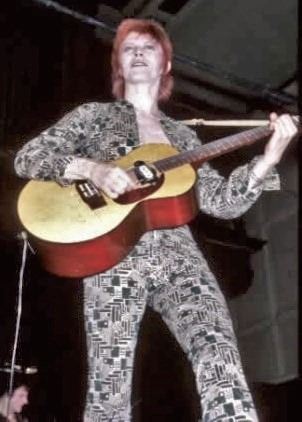 David Bowie in the early 1970sRik Walton [CC BY-SA (https://creativecommons.org/licenses/by-sa/2.0)]     David Bowie was born in Brixton, London during the winter of 1949. Life in the suburban part of Brixton was dull and depressing, and he longed for a life destined for something greater. He lived in Brixton his whole childhood and bounced between rock bands for most of his younger years and adult life. Twenty years later, his name touched the stars with his release of the worldwide hit “Space Odyssey,” a melancholy pop hit about an astronaut lost in space; It broke records and became a hit in both the UK and the US. After the release of “Space Odyssey,” Ziggy Stardust, a character Bowie played on stage as an apparent alien hybrid, a concept unheard of at the time, made his rock-star debut. The traditional hero ‘should be’ a lot of things but, in the real world, humans are not perfect, although some come pretty close to grasping the title. However, opinions will be commonly unanimous on saying that a hero should be someone that is unprejudiced, understanding, and should at the least have a conscience. David Bowie is an electrifying example of someone who fills people's hearts with hope and inspiration; his open-mindedness and obsessive interest with the human thought process and philosophical limits gave him the title of a timeless legend.

Bowie braved his family history of schizophrenia, bringing about his obsession of the human thought process. During an interview with Mavis Nicholson during the Afternoon Plus, Bowie explained one of his fascinations with the endless thought process of the human brain. “I think if he is in isolation, instead of receiving the whole world as his home, he tends to create a micro world inside of himself. And it’s that part of the human mind that fascinates me about the small universes that can be created inside the mind” (Nicholson). In the quote, Bowie analyzes how the human brain can become reclusive when being subjected to an intense feeling of loneliness, and in order to suppress its own needs, it creates its own reality. David’s fascination with the psychology of humans stems from his late half-brother Terry’s suffering from schizophrenia and frenzied suicide; this was the major event which was also the tragedy that opened Bowie’s eyes to how self-destructive and sorrowful a psychological state could be. After being subjected to a family history of schizophrenia and a neglected childhood in his past, Bowie channeled his childhood angst into music and artistry and it created the signature Bowie the world knows today. This makes him heroic because of how he used these experiences and his personal studies to share his information and knowledge with the world, and channel that into music for fans to understand on a more deep and personal level. From this experience, he often studied the human mind in order to fully understand its power, giving him a deeper understanding of the world around him; this eventually led him to share his knowledge with others to help them as much as he could. In an article about David Bowie in the Encyclopedia of World Biography, Bowie explained his thoughts on his obsession over his work and music at a young age. “...Bowie told Kureishi of Interview that ‘I know now for a fact that so much of my ambition and drive came from wanting to escape from myself and from feelings of inadequacy and vulnerability and not feeling I was loved by anybody, particularly. I would drive those feelings out by throwing myself not only into work, but eventually into characters’” (Gale 6). In Bowie’s direct quotation, he explored how his own past anguish was turned into motivation, and how it fueled his dream to become someone that would most definitely be loved. Bowie’s closest childhood companion was his older brother Terry and, sadly, Terry tragically commited suicide after suffering from schizophrenia for years on end; however, after going into deep reverie in order to become more substantive about himself and others, Bowie was able to overcome his slump and use it to teach other people about their misunderstandings. This makes him a hero because of how Bowie was able to channel his anguish and heartache into motivation towards his dream of becoming someone renowned and loved. After being subjected to a family history of schizophrenia and a neglected childhood in his past, Bowie channeled his childhood angst into music and artistry, and it helped create the signature Bowie that the world knows today; his past childhood experiences are an inspiration towards his art and important pieces in his life.

In a time filled with ignorance, Bowie is able to express his psychedelic artistry and characteristics, while staying prideful and openly bisexual. Bowie's pop persona, Ziggy Stardust was released to the world in 1972, and was an instant hit with fans so it was understandable. During an interview with CBC, David was asked as to what he interpreted Ziggy as. “Ziggy, I wanted to define the archetype, messiah rockstar. That’s all I wanted to do, and I used the trappings of kabuki theatre, mime technique, fringe New York music […]” (Bowie). Ziggy was a character filled to the brim with personality and history, and Bowie’s vast knowledge of odd stage techniques, such as kabuki theatre and miming, helped him perfect his alien hybrid; Bowie brought a new world to the tiny box of mod and pop, and Ziggy’s vast history is proof of that. To Bowie, something like a character was treachery water to dip his toes in, but Bowie’s artistry and talent gave him the ability to express a newfound and insightful understanding of his alien-like character and his vast closet of personas. Author Dylan Jones expresses how David Bowie had an impact on children and people that were seen as ‘different’ with his music and open bisexuality. In Jone’s book, David Bowie: A Life, “He freed people from the prison of their sexual desires, anyone who wasn’t mainstream. He said it’s all right to dress up as a woman, he said it’s alright to be gay, bisexual, trisexual, it’s alright” (Jones 154). Although Bowie lived in an unenlightened time,  it was slowly developing and becoming more accepting in different communities, and Bowie was a huge influence for that as well; he wasn’t afraid to be open about his role in the LGBTQ community no matter who shunned him, and he really broke down boundaries for his time. Bowie’s open sexuality brought hope into the early LGBTQ community, he was like a beacon of light shining through the murky waters of despair, leading them to acceptance and happiness. 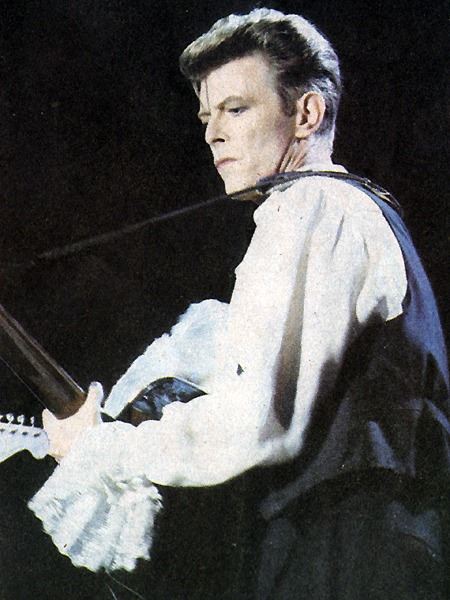 David Bowie in 1990Jorge Barrios [Public domain]    Bowie was an idolization of what people wanted the ideal and modern world-to-be come to life: he had a creative and innovative sense of style and music, was intensely philosophical, and he often appraised the meaning of life itself and how humans tied into it. Bowie was a person that was not ashamed of being who he was and was not afraid to break down segregational boundaries during his time, he was open about his sexuality and did not shy down from standing out of the crowd. He was also very interested in how the human mentality worked and used this interest to find a deeper understanding that he used to help his fans and others. Bowie is an inspiration to many people across the world and he inspires not only them, but me as well because of his neverending confidence and determination to keep going. There is a famous quote from him, “I don’t know where I’m going, but I promise it won’t be boring [...],” (Bowie). This quote is a great example of why people look up to him. Bowie wasn’t a messiah, he didn’t end world hunger, but he promised his fans a show and this show was exactly what they needed to hear. The show told them that they were welcome and gave them a whole new world to explore with his storybook-like songs; it was, and still is, a safe zone or an escape for people. Bowie’s motives towards his art sometimes fell on deaf ears and left people confused and unsatisfied from something so out of touch with the popular music of the generation. However, Bowie never lost face. He was always confident in his music from day one until his tragic passing on January 10, 2016 due to a long battle with cancer. David Bowie finally made it out of his tediously boring suburban neighborhood, and moved right into pop history and fans’ hearts.