by Alisa Sriphet from San Diego, California in United States

The air rang with the boom of gunfire. Dust filled the sky, stinging the eyes, and burning the lungs. All the while, the dead and dying covered the ground. Among the chaos, one man rose to face it. Exhausted, gunless, and armed only with his faith and determination, he charged through storms of bullets to rescue those left for dead. Desmond Doss, a Seventh-day Adventist who didn't smoke, drink, curse, eat meat or carry a weapon no matter the situation, proved himself to be a person of the highest caliber. Doss came from humble origins, as he was the son of a carpenter, and his mother worked at the Craddock-Terry Company shoe factory ("Pfc. Desmond Doss"). Although both his religion and his job as a defense industry worker allowed him to not serve in WWII, he chose to enroll anyway because he wanted to serve his country. Doss was a courageous, forgiving and selfless person. No matter how much torment he'd receive by his own allies, he would still charge through fire defenseless and risk his life to save theirs. Due to his countless rescues, Doss was later awarded the Medal of Honor. Doss' selflessness was highlighted every time he'd rush back into the field to save one more soldier. He'd always put others before himself, even as he sustained his own injuries. His courage was demonstrated in a similar fashion. Despite having no means of protecting himself, he would still rush straight into danger to save others. Desmond Doss' refusal to turn his back on anyone, and willingness to face danger over and over again despite the risks, along with having the courage of a lion, nerves of steel and heart of gold make him a true hero, deserving to be remembered.

Doss's courage and unwillingness to leave anyone behind despite how they treated him exemplified his selfless nature. Even during the heat of battle, Doss would go to great lengths to save others. Despite being unarmed, Doss wouldn't hesitate to rush into the field: "From April 29 to May 21, Doss was in the thick of battle, tending the wounded. That first day he was credited with rescuing some 75 men pinned down by artillery, mortar and machine-gun fire atop a 350-foot escarpment known as Hacksaw Ridge" (Leepson). Out of the seventy-five men that he rescued alone, many of them were people that had previously belittled and harassed him for his religion and its practices. Although they weren't kind to him, Doss extended his kindness to them when they needed it most. Even after a busy day of hauling people from the battlefield, Doss doesn't stop. He’d go right back onto the field, and into the chaos: "The next day Doss rescued a wounded soldier 200 yards forward of the lines. While his company assaulted a strongly defended cave, he advanced through a shower of grenades to within eight yards of the cave's mouth. He dressed wounds and made four separate rescue trips" (VandeVere). Leaving the protection of his company, he ventured alone into danger for the sake of the wounded. Even being so near to danger, he kept going back, refusing to leave anyone behind. Not only did he save one person from the cave's mouth, but he went back over and over again to haul back the injured. Selfless to the point that others may consider crazy, Doss would not only charge into the fray, but he wouldn't abandon anyone in his hurry to leave it either: "Private Doss remained with the wounded, and, according to his Medal of Honor citation, he refused to seek cover, carrying them, one by one, in the face of enemy fire. He lowered each man on a rope-supported litter he had devised, using double bowline knots he had learned as a youngster and tying the makeshift litter to a tree stump serving as an anchor. Every wounded man was lowered to a safe spot 35 feet below the ridgetop, and then Private Doss came down the ridge unscathed" (Goldstein). Doss' selfless personality urged him onto the field of battle over and over and over again. Even though he was scared himself, his first thought wasn't for himself, but for his comrades. He would cause so much trouble and put himself in such a stressful position just so that he could try to give another person more time to live. Doss' unrelenting ability to persevere and thrive despite the circumstances, along with his inability to abandon a comrade, makes him a shining icon of inspiration for others.

Even when the odds were against him and his body cried in protest, Doss never wavered. Everyone goes through hardships, some more than others. This pressure can crush a person, or create a diamond: "After being struck in the arm by enemy fire, Doss used a rifle stock as a splint and crawled about 300 yards to a medical aid station" (Dictionary of Virginia Biography). Doss had utilized his skills before on many occasions to save others, but he hadn't had to save himself. Fueled by his will, he reacted oppositely to what would be natural to most. Instead of giving up and waiting for someone to come to him, he took matters into his own hands to save himself. Being on the battlefield for such prolonged periods, it would only be natural that he received some injuries: "Doss was seriously wounded in the leg by a grenade. Instead of calling on another medic for help, he treated himself and waited five hours to be rescued" ("PFC. Desmond Doss"). Doss would always be there for his fellow companions when they were wounded. Even when he was injured and couldn't be there for them, he still wanted to make sure that everyone who needed help got it. His determination shined as he helped himself when he received injury and pushed the other medics to help the other more damaged soldiers. Doss wasn't one to crack under peer pressure either: "While training at stateside posts, Private Doss faced harassment from fellow soldiers for his devotion to prayer and his refusal to handle weapons or work on the Sabbath" (Goldstein). Doss had always been highly religious, as it had been a part of his life growing up. Knowing that he shouldn't take life as his religion discourages it, he joined the army regardless. However, when people started to belittle him for his religious practices, he still didn't give up on his virtues, nor his hopes to save others. 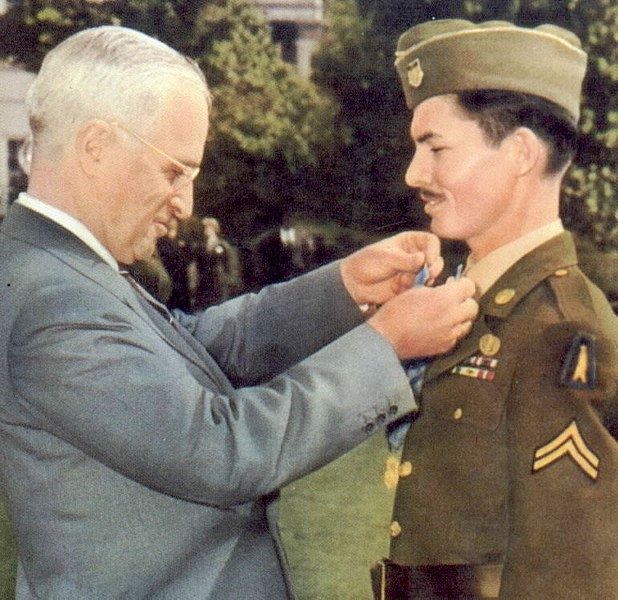 https://commons.wikimedia.org/wiki/File:Desmond_Doss_CMH_award.jpgUS Federal Government [Public domain]Desmond Doss faced many challenges, some of which he even volunteered to challenge for the sake of his fallen comrades. Throughout the many sacrifices he had to make to stay alive, he never gave up his values, no matter how much pressure he was under. Doss was undoubtedly a selfless person. Continuously, he would dive into battle, unarmed, and near the enemy to save the fallen. His determination was what would push him, even as he'd tremble with fear, to go back into the field. To go back and get one more. Then one more. And one more. Doss may not have begun in royalty, or with riches in his account, but his actions prove their weight in gold: "Desmond T. Doss, who as an unarmed Army medic saved the lives of dozens of fellow soldiers under fire on Okinawa in World War II and became the first conscientious objector to receive the Medal of Honor..." (Goldstein). To be in the army and not be armed to one's teeth is nearly unheard of. Many would carry at least one weapon, if not for fighting than for defense. Yet despite that, Doss adhered to his beliefs, faced the looming danger, and came out victorious. When most people think of a hero, they imagine someone that is amazing and has done something outstanding - a person that is practically untouchable and stands atop a pedestal of accomplishments. Doss, however, started like everyone else. In fact, he had only completed one year of high school before getting a full-time job to help support his family. He started out as a regular person, but that didn't hold him back. He still was able to accomplish unimaginable feats of determined selflessness, all while coming back alive and with his virtues intact. Doss was the type of person who would risk their life for another's. On the brutal battlefields of WWII, where dust clouded the sky, the dead and dying covered the floor like a blanket, and the only sounds heard were gunshots firing, hope was not something easy to find. And it was even harder to hold onto it, especially when surrounded by wounded comrades while sustaining painful injuries. Yet in the middle of chaos, a shining figure appeared. He wasn't big, nor did he have a weapon to protect even himself with, much less another person. But there he was, rushing to help the fallen, disregarding his own fear for the sake of others. Doss may not have been the strongest person physically, or the richest man, but he had a heart of gold, a will of steel, and the soul of a hero.