Desmond Tutu: Anti-apartheid icon and moral compass for a nation

Desmond Tutu, the Nobel Peace Laureate, thrust the church into the forefront of South Africa’s liberation struggle, and led the commission that confronted the country's violent past. He passed on Sunday. 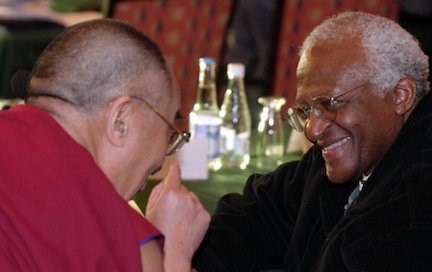 In December 1990, South Africa stood on a cliff’s edge. As political negotiations to end apartheid churned, tanks rumbled through black townships and mass marches filled the country’s streets. But for once, the man known for literally throwing himself between warring factions in South Africa’s struggle for liberation was nowhere to be found. Desmond Tutu — Nobel Peace Laureate, Archbishop, anti-apartheid icon — had gone away.

“Of all places, why did you come to Helena?” A reporter asked him when he stepped off the plane after a 47-hour journey from Cape Town.

“Of all places,” the archbishop responded evenly, “it is the one with the Montana Logging and Ballet Company.”

That night, as his home country burned, Mr. Tutu sat in the first row of a fundraiser for black South African students put on by a satirical musical quartet who had written a song about apartheid called “Take the Barriers Down.”“Four white men from Montana cannot sound like black South Africans,” Tutu proclaimed. “But they can sing about the justice that is God’s intention for us all.”

For those watching – in Helena and Johannesburg alike – the message was clear: Tutu might be a Nobel laureate, but no person, no cause, no fundraiser was too small to be worthy of his time or his gratitude.

Tutu, who died Sunday at the age of 90, will be remembered for a long list of history-making accomplishments — as the anti-apartheid cleric who thrust the church into the forefront of South Africa’s liberation struggle, and the towering moral authority who led the country’s confrontation of its violent past in the Truth and Reconciliation Commission. But for many, his legacy is far simpler.

“When people said he spoke for the ordinary people, he used to say that no people are ordinary,” John Allen, Tutu’s biographer and his former press secretary, told the Monitor in a 2015 interview. And his life was living proof, Mr. Allen said, of exactly that value.

Tutu seemed equally at home in the White House laying into Ronald Reagan for his policy of “constructive engagement” with the apartheid government and in the shack settlements of Johannesburg giving a service for domestic workers, gardeners, and miners. A rarity among clergy of his stature, he seldom held his tongue — no matter the audience.

That abrupt honesty won him many admirers, but also a slate of critics, particularly after the dawn of democracy here, when he turned his sharp intellect on many of the liberation leaders he had once fought beside. “It was easy to be against something [during the struggle],” he opined in 2015. “A far more difficult task has been left to [the new government] — making a reality of our freedom.” In his later years, he hardly slowed down, taking aim at corruption, homophobia, AIDS denialism, xenophobia, and Israel’s occupation of Gaza and the West Bank – a nagging, unavoidable, and morally sharp voice with little regard for etiquette or political correctness.

“So many leaders of that era had the same skills, the same passion, the same fire to end apartheid that he did, but what set him apart were his skills as a communicator,” Mr. Allen said. “He was blunt, he could be reckless, and he spoke from the gut — but you know, most of the time he’s been right.”

“We had the Bible and they had the land”

Desmond Mpilo Tutu was born October 7, 1931, in Klerksdorp — near Johannesburg — where his father was a headmaster and his mother, who would later become a teacher, worked as a domestic servant. Although his dream was to become a doctor, the family couldn’t afford his training, so the young Tutu became a teacher instead. But he quickly realized his calling lay elsewhere.

In 1961, Tutu was ordained as an Anglican priest, and soon after left South Africa for further study in England. From nearly the moment he entered the church, however, his role there was a sharply critical one.

“When the missionaries came to Africa they had the Bible and we had the land,” he once said. “They said ‘Let us pray.’ We closed our eyes. When we opened them, we had the Bible and they had the land.” Throughout his career, he would repeatedly and forcefully scoff at the notion that faith and politics shouldn’t mix, calling the Bible “the most radical, the most revolutionary book there is.”

Over the next two decades, Tutu climbed the ranks of the Anglican Church, until in 1978 he was appointed head of the South African Council of Churches, an umbrella group that represented more than 12 million of the country’s Christians.

It was from this pulpit that he launched the fiery campaigns against apartheid for which he became world famous. Amid the brutal crackdowns on dissent that sprawled across the 1980s, when political leaders like Nelson Mandela and O.R. Tambo were muzzled by prison or exile, he helped fill the vacuum by shoving the church to the forefront of the liberation movement. The images that traveled around the world of the diminutive clergyman clutching a Bible and facing off against soldiers with machine guns became among the most potent global symbols of apartheid’s moral repugnancy.

In 1984, Tutu was awarded the Nobel Peace Prize, and two years later became the first black Archbishop of Cape Town — the highest position of leadership in the Anglican Church in South Africa.

Known for his ebullience and infectious good charm, Tutu was also an intensely spiritual man. Each morning as Archbishop, he awoke at 4 a.m. and for the next four and a half hours, did little besides pray.

“No matter how big the crisis he might face during the rest of the day was, during those morning hours he was absolutely silent,” Mr. Allen said. “Here was this man who was valiant, jovial, full of incredible humor, but these were two sides of the same coin. You couldn’t have the one without the other.”

But if Tutu was a man of fastidious discipline, his politics bore little allegiance to any party line. He condemned both violence and communism, and celebrated racial reconciliation at moments when it seemed vividly impossible to most black South Africans.

He also pulled no punches with other liberation movement leaders – including Mr. Mandela, who spent his first night out of prison in February 1990 at Tutu’s official residence in Cape Town. “What bliss to be alive,” Tutu later wrote of that day. “We felt proud to be human because of this amazing man. For a moment, we all believed that it is possible to be good.” But in the coming years, the two disagreed – at times frequently and fervently – over how best to move beyond the country’s traumatic past.

“He attacked me publicly as a populist, but he never tried to shut me up, and we could laugh over our tiffs and remain friends,” Tutu wrote in his 2013 obituary of South Africa’s first democratically elected president.

In 1995, Mandela appointed the Archbishop to one of the most difficult tasks in the country’s grueling process of reconciliation, to lead a Truth and Reconciliation Commission. For the next three years, he presided over a society’s exorcism of itself as apartheid’s perpetrators and victims publicly testified to the crimes of apartheid in exchange for amnesty. Never one to hold himself aloof from his country’s suffering, Tutu broke down in tears on only the commission’s second day, while listening to the story of a man tortured by the apartheid police.

“It has been an incredible privilege for those of us who served the commission to preside over the process of healing a traumatized and wounded people,” he later wrote of the experience. “Quite improbably, we as South Africans have become a beacon of hope to others locked in deadly conflict that peace, that a just resolution, is possible. If it could happen in South Africa, then it can certainly happen anywhere else.”

Although the TRC was internationally lauded at the time, many later came to doubt the value of asking victims to publicly re-open old traumas, or to give up their right to legally prosecute those who wronged them.

Throughout Tutu’s later years, meanwhile, he continued to be a loud and vocal critic on the social issues of the day — from the imprisonment of Chelsea Manning to climate change to the U.S.-led war in Iraq. And he reserved some of his harshest judgments for those now ruling South Africa.

Asked in 2011 to describe his reasons for devoting his life to fighting injustice, Tutu told a South African public radio station, “I really am incapable of just being indifferent to suffering.” He laughed the giddy, high-pitched laugh for which he was well known. “I mean, it’s rough, because life would have been so much more comfortable otherwise.”

MY HERO has stories, art and short films that celebrate Desmond Tutu.