by Sophia Fuentes from San Diego, California in United States

Dogs have no concept of social rank and status. Dogs have not a single care if you are rich or poor. A dog will not care about the cost of his home, the extravagance of his possessions or the refined taste of his meals. Dogs are simply content with the bare minimum. Diogenes of Sinope, nicknamed the “Dog” because of his cynical view of the world, believed exactly this. Diogenes was birthed in Sinope but relocated to Athens (Piering). He is most known for his help in the invention of Cynicism, and his lifestyle that was often described as “dog-like.” Diogenes lived with only the bare minimum, his home being a large bucket in the marketplace and having little to no possessions (Stilo). He had no care for materialistic things and was more focused on his philosophies. Diogenes of Sinope strived for a life of humbleness, straying from wealth and social rank, rather aiming to counter the social philosophies, thus making him a hero. 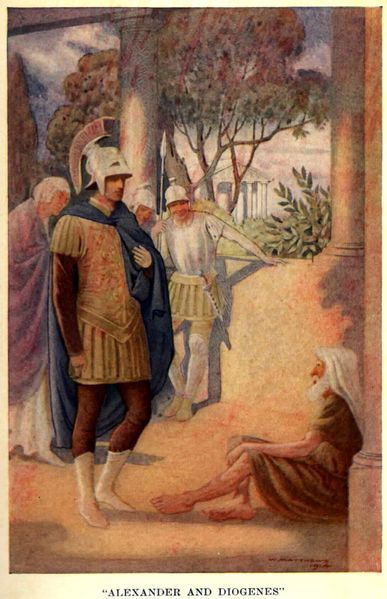 Alexander and DiogenesW. Matthews [Public domain]Diogenes aimed to live his life without the desire for riches and fame that many others aimed for, thus making him humble. In regards to living with only the bare minimum, “[...] the Cynics [the group of philosophers that Diogenes was part of] claim that such a life is the life worth living. As a homeless and penniless exile, Diogenes experienced the greatest misfortunes of which the tragedians write, and yet he insisted that he lived the good life: :He claimed that to fortune he could oppose courage, to convention nature, to passion reason" (Piering). Diogenes, despite his life in a basin out in the marketplace (Piering), believed heavily that his life was well spent because it was spent humbly. Exiled from his home in Sinope (Piering), he still continued to live like life had provided him only the best, for that was what he truly believed. Diogenes believed that one did not need material things to be happy, but rather, an understanding of oneself. The Cynic life, the one that Diogenes helped to invent and live in, “[...]involved a search for true happiness through the realization that wealth, rank, honors, success, and other such worldly aims were as nothing compared with complete independence of mind. The second and third aims supported the first” ("Diogenes"). Diogenes invented a way of living that was essentially based around being humble. He didn't believe in or actively strive for wealth, fame, or a high social rank, simply aiming to fulfill his own self, and his thirst for knowledge. He didn't see others as better solely because of their wealth or power. He saw others for who they were behind all of the riches, and treated them as such. When approached by Alexander the Great, one of his admirers, Diogenes told him to stand out of his light (Stilo). He saw the ruthlessness of Alexander’s conquest and treated him the way he felt he should, because he refused to see the social ranks, and instead, the inner person. Diogenes, despite whatever opportunities may have come his way, continued to live humbly and overlook wealth and social rank. 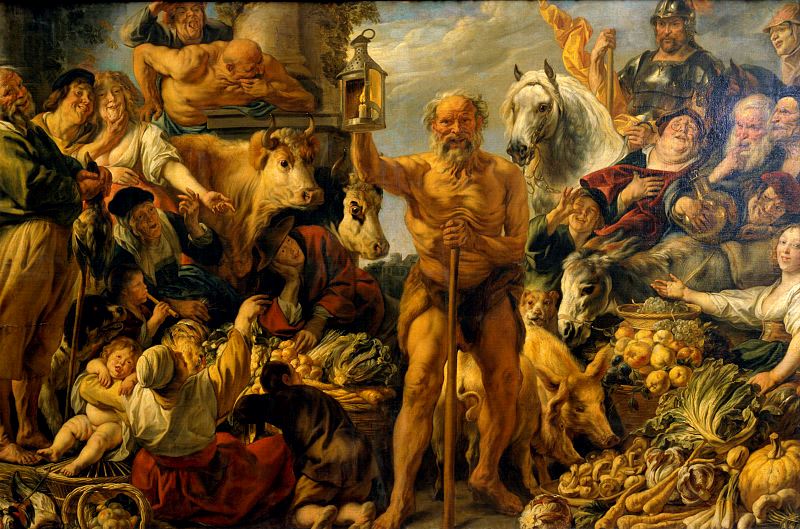 Diogenes on his conquest to find an honest manJacob Jordaens [Public domain]Diogenes understood the follies of man and was unafraid to counter the thinking of others. As to his thoughts of others, “Of grammarians, he was astonished that they desire to learn everything about the misfortunes of Odysseus but nothing about their own [...] Of orators, that they speak of justice but never practice it” (Stilo). Diogenes was able to see the bigger picture. He questioned those who may contradict themselves, and those who used the excuse of ‘education’ and a ‘greater understanding’. He was able to see past the facade of people who pretended to care about one thing but never truly invested enough of themselves into it. When Diogenes was “Chided as an old man who ought to rest, he replied, ‘What, if I were running in the stadium, ought I to slacken my pace when approaching the goal?’” (Stilo 8). Unafraid of what the future held, Diogenes was easily able to counter those who attempted to conduct his life in their own way. ‘Slackening the pace’ meant becoming cocky - seeing the end goal and being so sure one will make it regardless. Diogenes was not one to be cocky. He would continue to do what he felt was necessary until the very end. Diogenes’ vast knowledge of his social and philosophical environment helped him to become acutely aware of the faults in human philosophy.

Diogenes vowed to live humbly, and completely unafraid to share his personal philosophies, even if they countered others. Living in a bucket in the marketplace, having little to no possessions, and not giving a care to wealth, Diogenes truly lived in the most down-to-earth way possible. He was able to challenge the everyday philosophies of mankind with his own. In essence, “Diogenes sought to make any man king, not of others, but of himself, through autonomy of will, and his own life was his main philosophical demonstration to this end” (Kidd). This was his legacy. A man who did not seek the attention, the fame, and the glory received from others; no, rather, Diogenes sought the glory received by himself towards himself, and encourages others to do the same. He strongly believed in knowing oneself - the mind and body. This is what he wanted others to realize as well. One’s journey is not that of materialistic choices, but rather, that of self-enlightenment. And so Diogenes, the “Dog,” had no care for social status, no care for wealth, and no care for extravagance and refinery; he simply believed in the bare minimum, and the true connection with oneself.

Kidd, I. "Diogenes of Sinope." Encyclopedia of Philosophy, Macmillan, 2006. Biography In