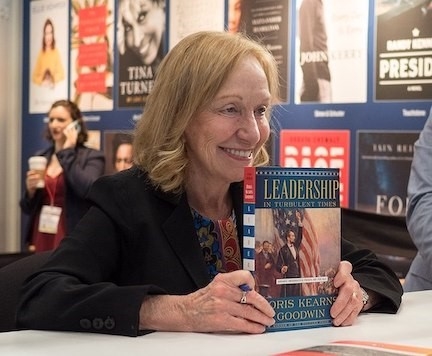 Goodwin is best known for her biographies of U.S. presidents, which have included Lyndon Johnson, Robert F. Kennedy, Abraham Lincoln, the Roosevelts and many more. She earned the Pulitzer Prize in History for “No Ordinary Time: Franklin and Eleanor Roosevelt: The Home Front in World War II.”

Her most recent book, “Leadership in Turbulent Times (2018),” was an instant bestseller.

Her career as a presidential historian and author began when she was a 24-year-old graduate student at Harvard University and was selected to join the White House Fellows, a prestigious program for public service leadership.

Her book, “Team of Rivals: The Political Genius of Abraham Lincoln,” inspired Steven Spielberg’s film “Lincoln,” and is an inspiration for business and political leaders, including President Barack Obama.

A political commentator, Goodwin is often called upon to speak about burning issues of our times, from politics to the COVID pandemic, and the future of democracy. On MSNBC’s 11th Hour, Goodwin claims that the crux of preserving our democracy and “the fight of her lifetime” is our right to vote. This is not a partisan battle, she says, and calls for state legislatures to create public sentiment around the issue of preserving our democracy through guarding and expanding voting rights. You can expect that Doris Kearns Goodwin will be speaking out a lot more on this issue in the days to come.