by Tahrin and Brooke from Montvale, New Jersey

I do not wish to give [women] a first place, still less a second one--but the most complete freedom to take their true place whatever it may be...

Born on Feb. 3, 1821, in Bristol, England, Elizabeth Blackwell was one of nine children. Her mother, Hannah, and father, Samuel, were very generous and considerate people. Her father owned a sugar refinery business. He had always encouraged his children to make their own opportunities. Samuel had every one of his children educated so that in case a chance was handed to them, they could make use of their knowledge. When Elizabeth was seven or eight, Samuel was unable to pay the taxes. The family was then kicked out of their home. They moved to New York City in 1832, where the family was active in the abolitionist movement.

In 1838 the Blackwells moved to Cincinnati, Ohio. A few months later, when Elizabeth was 17, her father passed away. To help support the family, she and her sister established a boarding school for girls. A dying friend named Mary Donaldson suggested that she become a doctor. Blackwell probably thought that would be perfect, because when she was younger she said that she'd be "something hard". All her life she pushed herself and wouldn't stop until she was really satisfied. She was always independent and wished to do things on her own. However, at that time, women were welcomed as seamstresses, nurses, or teachers, but never as doctors. Blackwell soon discovered that the challenging task of becoming a doctor would be a lot harder than she ever imagined.

It was in 1844 that Blackwell convinced herself that she was going to become a medical doctor. The way she began her studies was by reading medical books. Later on, she received private instruction from Samuel H. Dickinson of Charleston (S.C.) Medical College, along with a few other professors and doctors. Because no school would admit her, Blackwell's only choice at that point was private schooling.

Rejections to her applications piled up and up like winter snow. One of the rejections gave her an idea: she should dress up as a man. Even though it sounds dumb, Blackwell decided to give it a try. The school let her study anatomy, but they wouldn't allow "him" to earn a degree. Strong-willed Blackwell tried again, but was once more denied. So many doors were closed simply because she was female. She truly wished to become a doctor with all her heart, and was not about to let that fact stop her from achieving something she desired. Twenty-nine schools turned her down.

Finally, in 1847, she was admitted into a New York college, only to discover that she had been admitted as a joke. At Geneva Medical College (now Hobart and William Smith Colleges) she suffered social ostracism, criticism and ridicule. Other women, walking past her on the street, wouldn't allow any part of themselves to touch her, or they'd talk about her in disgust. Whenever she'd approach the table, everyone would hush and ignore her presence.

Despite constant slights and embarrassments, Blackwell continued her studies and in 1849 graduated at the top of her class. On Nov. 6, 1847, Elizabeth was accepted to Geneva Medical College in Paris. Many schools before that had denied her, but Geneva College accepted her and she was the only woman as a doctor-in-training. She stayed at Geneva for two years and graduated at 26 with special recognition. But Paris doctors proved to be as intolerant as her American colleagues. They wouldn't permit her to practice as a doctor, so she was forced to enter a large maternity hospital, La Maternité, as a student midwife. On Sunday, Nov. 4, 1849, Blackwell was syringing the eye of a baby boy. The patient had purulent ophthalmia, a horrible eye disease. Some of the contaminated water spurted from his eye to Blackwell’s eye. Later, her eye was removed because she had caught the same disease as the baby had. Her eye was replaced by a glass eye. After that she went to London to continue her studies.

After Blackwell returned to New York in 1851, hospitals still wouldn't allow her to work. Male doctors ignored her, many hospitals wouldn't let her into the wards, and she had very few patients. She was barred from practice in most European and American hospitals.

After American hospitals refused to hire her, she opened a clinic in New York City, where she was joined by her sister, Dr. Emily Blackwell, and Dr. Marie E. Zakrzewska. This infirmary was in a small room near Tompkins Square. She received patients three afternoons a week. The majority of the patients were poor immigrants. She taught them the importance of sanitation and gave them medical counsel. She taught them these things and counseled them not because she wanted their money, but because she thought it was necessary. Elizabeth became lonely, so she adopted a thin, red-headed, Irish seven-year old child named Kitty.

Along with other women who became doctors and several other tolerant Quakers, Blackwell started the New York Infirmary for Indigent Woman and Children, staffed entirely by women. The infirmary formally opened on May 12, 1857. The hospital only charged its patients four dollars a week and didn't charge if they could not afford it. Therefore it was always in financial need.

It took lots of work on Blackwell’s part to open the New York Infirmary for Women and Children. Elizabeth, Emily, Dr. Zakrzewska, and many nurses all worked in the infirmary. The infirmary had many hard years. Crowds of family members and/or friends, of patients who died, would accuse them of killing the patients. They said that women weren’t fit for being doctors, and that was the reason their family members and/or friends died. Elizabeth traveled for a few years, but started working at the infirmary again in the beginning of the Civil War.

Eventually, Elizabeth earned the respect of her colleagues and the community. Her leadership in meeting the medical problems presented by the Civil War won her recognition. In 1868, Elizabeth and Emily Blackwell opened a medical college for women which they ran in the hospital. The high-quality institution remained open until 1899, when women were first allowed to enter the Cornell University Medical School.

In 1869, Elizabeth returned to London and maintained a large practice. She was one of the founders of the National Health Society of London and of the London Medical School for Women, where she was Professor of Gynecology from 1875 to 1907. Dr. Blackwell wrote and lectured, too. A series of lectures which she delivered in England in 1859 brought her great recognition in Britain. Her lectures and books dealt mostly with social hygiene and with preventive medicine. Some of the books she wrote are "The Physical Education of Girls" (1852) and "Pioneer Work in Opening the Medical Profession to Woman" (1895).

In one of her favorite works, Elizabeth said, "The idea of winning a doctor's degree gradually assumed the aspect of a great moral struggle, and the moral fight possessed immense attraction for me." She wrote many books and papers on health and education.

She was also in the middle of writing an autobiography, but was unable to complete it. Dr. Blackwell passed away on May 31, 1910, in her home in Hastings, England, at age 89.

Read another Elizabeth Blackwood tribute page on My Hero - written by Rebecca from Fredericksburg
Women's History - The Library of Congress' women's history site.
The National Women's Hall of Fame 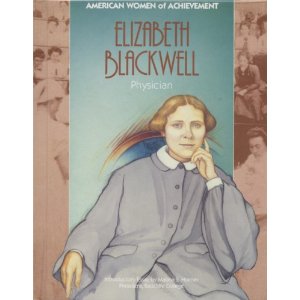 Elizabeth Blackwell was born on Feb. 3, 1821 in Bristol, England. In order to support her family when her father died, Elizabeth, along with her sisters and mother, opened up a small private school. Elizabeth's first job was as a teacher, which she didn't like.

That was when she decided to become a doctor. She applied to many medical schools, including Harvard, Yale and Bowdoin. Sadly, all her applications were turned down, because at that time, only men were doctors. When she was finally accepted, the students and professors were cruel to her because she was the only woman at the school.

For the first time, Elizabeth practiced medicine at a summer program in 1848 at the Philadelphia Hospital in Pennsylvania. The young physicians there were cruel as well and offered her no assistance. Elizabeth graduated from Geneva in 1849.

While she was in Europe, she got a horrible disease called opthalmia, which left her blind in one eye. She then adopted an orphan.

Elizabeth helped do many things, such as establishing a Health Society in 1871. Elizabeth died at her home in Hastings, England, on May 31, 1910.