by Clara Wei from San Diego, California in United States 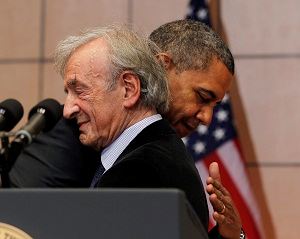 ”A veteran inmate— someone who had been a prisoner for a while— leaned to Elie. ‘Hey, kid, how old are you?’ he asked. ‘Fifteen,’ Elie answered. ‘No,’ the man replied. ‘You are eighteen.’ Elie was puzzled… The man quickly grew angry. ‘Fool,’ he barked, ‘listen to what I say.’ This man understood the selection. He knew who should be allowed to live and who would be sent to the gas chambers… After that, the man disappeared into the darkness” (Koestler-Grack 35). This is the moment that would forever change the rest of Elie Wiesel’s life. This man— who must’ve been fated to meet Elie— gave him a chance to survive. When Elie Wiesel was just fifteen, he and his family were taken to Auschwitz, a concentration camp during World War II. He went through what is now known as the Holocaust. Wiesel was eventually liberated at Buchenwald, after which he would write more than fifty books about the Holocaust. These books earned him the Nobel Peace Prize in 1986, where he was awarded for being  “‘... a messenger to mankind; his message is one of peace, atonement and human dignity… The message is in the form of a testimony, repeated and deepened through the works of a great author’” (Lifson). A hero persists through hard times, is brave, and helps others. Elie demonstrated determination and bravery by surviving one of the worst genocides in the history of mankind, and experiencing it again to educate others. He has also shown that he is selfless by starting the Elie Wiesel Foundation for Humanity, which is based on fighting against injustice towards people around the world. 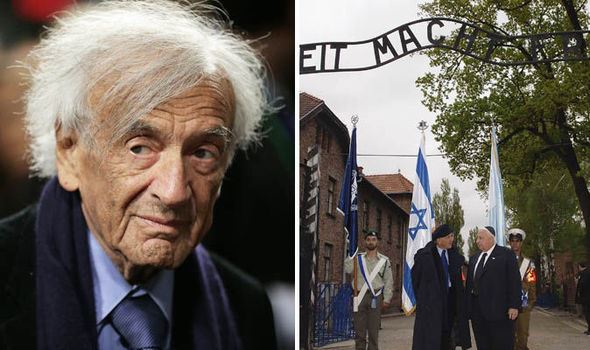 Elie Wiesel embodied perseverance and strength by surviving the Holocaust. At a young age, Elie was forced to leave his hometown and fight to save his own life: "... the young Wiesel’s worlds of study, faith, and Jewish tradition remained relatively undisturbed until the Germans occupied the territory of their faltering Hungarian allies… His older sisters, Hilda and Bea, also escaped death during the Holocaust, but Wiesel’s mother, father, and little sister, Tsiporah, did not" (Roth, and Horn). Wiesel was strong, even from a young age. As the Holocaust went on, he endured the horrible, inhumane conditions of the camps. His hard work and determination to keep going was what kept him alive. Elie also had to deal with loneliness, as most of his family was gone. Even though the terrible events eventually passed,"… the trauma of the Holocaust did not end at liberation. Like other survivors, Elie was faced with the daunting task of learning to live again… He decided to never speak of his experiences, until he found the right words. He doubted, though, that he would ever find the right words to describe the horrors he had witnessed" (Koestler-Grack 57-58). The Holocaust caused permanent mental and physical damage, but Elie was a survivor who learned to push through. His bravery and persistence made him one of the most impactful writers in history. Elie Wiesel was one of few who survived the Holocaust, which is a heroic feat in itself. He went on to create a name for himself, and show the world what he had gone through. 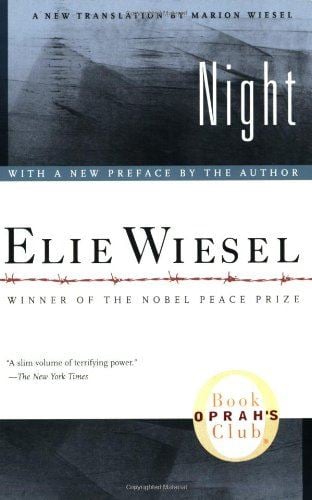 One of Elie Wiesel's most famous novels.https://goo.gl/images/s7ZmYmElie Wiesel is a hero because of his courage to willingly relive the terrifying events of the Holocaust to educate others. No matter how life-changing the Holocaust was, Elie Wiesel didn’t want to give up. Years later, “the fact that no one stood up for the Jews in Europe during the Holocaust continued to haunt him… Elie wanted to use his influence to be a voice for those who could not speak for themselves… it was not for money, not to entertain, nor to please. It was to help others” (Koestler-Grack 87). Wiesel wanted to change the world, and did so by writing. This forced him to bravely revisit every miniscule detail of his horrible past. Despite what he had gone through, he still wanted to stand up and fight. This eventually fueled him towards raising more awareness for his cause. After liberation, he decided that the world needed a new voice: “As a social activist, Wiesel used his writing to plead for Jews in danger and on behalf of all humanity. Wiesel captured the spiritual reawakening that was to mark the struggle of Soviet Jewry during the 1970s and 1980s” (“Elie Wiesel.” Encyclopedia of Biography). He used his writing to show his audience the truth about the Holocaust, which required him to painfully immerse himself back into his traumatizing past. He wrote down his pain and grievances to show others what he had gone through. This brought attention to the problem at large - people who were in danger. Wiesel embodies the traits of a true hero through his brave efforts to raise awareness and educate others. 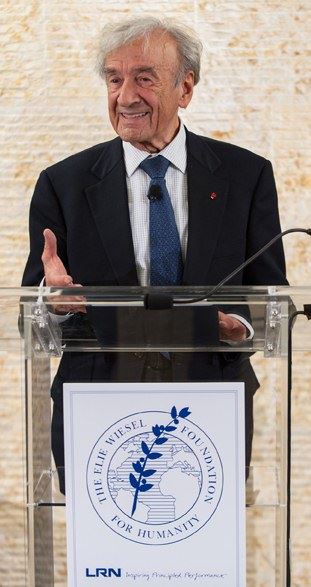 Elie speaking at a foundation meeting.https://goo.gl/images/RjscmsWiesel eventually went on to create a foundation that focuses solely on the exercising of human rights, demonstrating his selfless nature. Wanting to take the next step, after winning a Nobel Prize, he “...used the Nobel Prize money to establish the Elie Wiesel Foundation for Humanity. The foundation's activities include sponsoring national essay contests for college students on the topic of human rights, and gathering well-known people together to discuss topics such as hate” (“Elie Wiesel.” UXL Biographies). The foundations focus was to prevent events such as the Holocaust from ever happening again. This is inspiring to anyone who has gone through difficult times. Elie’s message is to keep going, no matter what. The only thing on his mind was not himself, but others. The foundation Wiesel created was, “... dedicated to combating ‘indifference, intolerance, and injustice through international dialog’” (Lifson). Elie Wiesel didn’t just stop at writing books. He created a foundation to recognize and speak out against the many injustices around the world. It was also to focus on important world matters, which were things that were bigger than himself. Before his last moments on Earth, Elie made the most of his life. He left a large footprint that still impacts many to this day, and will for years to come.

Elie Wiesel’s strength to survive the Holocaust, ability to relive the experience again, and selfless actions are a few of the many reasons that make him a deserving hero. He was a brave, determined and inspiring individual. What makes Elie Wiesel a true hero is how he selflessly created a foundation for people's rights. He also endured a mass murder that destroyed many lives. He made a name for himself by deciding to expose the truth about what had happened to him. Wiesel was inspiring through his courageous actions: “Wiesel survived the Holocaust to offer testimony about the horrors of that time to a world that often seems to prefer to forget. His works speak of the need for people to feel compassion for their fellow human beings” (“Elie Wiesel.” UXL Biographies). There aren’t many people in the world like Wiesel. He was special, and showed how important it is to always push yourself, no matter how bad the situation is. Wiesel personally inspires me through his ability to take difficult situations, and being able to positively create a new perspective that impacts many. If Elie Wiesel didn’t suddenly age three years in that concentration camp, the world would have never heard the voice of a real hero.

Elie Wiesel Foundation for Humanity - This is a link to Elie Wiesel's official foundation, with more details in the link.
A tribute to Elie for his recent death. - This article gives a look into more about what Elie Wiesel had accomplished during his life.
Elie Wiesel's most famous and impactful books - This website shows some must-read books written by Elie Wiesel.