by Aditi Akella from San Diego, California in United States

A Lifetime Worth of Heroic Acts

“A hero is an ordinary individual who finds the strength to persevere and endure in spite of overwhelming obstacles”(Reeve). According to the late actor Christopher Reeve, who played Superman, a hero is someone who pushes past obstacles, not only for themselves but also for the well-being of others. Even the simplest of kind acts can be seen as heroic actions. For instance, a hero can be a single working mother who fulfills the role of both parents in order to provide for her children. A hero can even be a surgeon who works undesired night shifts. But all heroes have one thing in common: they selflessly persevere throughout their lifetime to take bold stands and decisions. Heroes deserve the title not because they are born with great traits, but because they choose a path of perseverance and selflessness for the benefit of others.

Wiesel at the World Economic Forumhttps://en.wikipedia.org/wiki/Elie_Wiesel#/media/File:Elie_Wiesel_2008.jpgElie Wiesel, a Holocaust survivor and social activist, developed the abilities of persistence and selflessness and used these strengths to the advantage of others rather than just himself. Wiesel, born in Sighet, Romania on September 30, 1928, was the third child and only son to his parents. At a young age he found himself interested in the Jewish culture of his family and began a deep study of Jewish religious texts. At the age of fifteen, Wiesel and his family were transported to Auschwitz, a German concentration camp, where, upon arrival, his mother and younger sister died due to suffocation in gas chambers. Fortunately, he was liberated on April 11 of 1945 by the Third Army of the United States. He then made his way to France as a refugee where he reunited with both of his older sisters. As a survivor of the Holocaust, Wiesel not only used his past experiences but also brought his Jewish identity into play as he fought for the rights of others. Wiesel’s journey through Romania, Poland, Germany, France, Israel, and finally the United States taught him that there were others who needed his help more than he needed theirs. He spoke up for oppressed people all over the world and was admired as a hero. A hero must persist despite the difficulties and obstacles along his path, and he must also show concern with the conditions and needs of others before his own. Elie Wiesel’s perseverance in the face of death and extreme selflessness when fighting for the rights of the oppressed not only allowed him to survive the Holocaust, but it also gave him the opportunity to become one of the world’s most influential heroes.

Wiesel exhibited his steely resolve initially when he overcame dire conditions and also when he pursued a life in social activism to lend his voice to those in need. Even when death was all around him, he was determined to survive, despite the starvation and brutal conditions he faced: “God knows what I would have given to be able to sleep a few moments. But deep inside, I knew that sleep meant to die. And something in me rebelled against that death. Death, which was settling in all around me, silently, gently”(Wiesel 89). Wiesel’s strong will allowed him to stay awake for days and miraculously survive death. Even in the dire circumstances of Auschwitz, he did not let the temptation of peaceful sleep lull him to his end because he knew that letting sleep overtake him would be his last action. Wiesel remained tenacious in his pursuit of justice even in later life. Though he was deprived of a normal life while living as a refugee, Wiesel used his determination as fuel to fight for others who did not have a voice to represent them: “‘Never shall I forget those moments which murdered my God and my soul and turned my dreams to dust’”(Gale par. 8). Wiesel lost everything that belonged to him such as his home and his family. Not only he lose these tangible possessions, he nearly lost his faith in God, humanity, and everything he had ever cared for. These intangibles are foundational for the well being of any person and Wiesel worked revive these. He found the strength to move past his suffering and dedicate himself to restoring his faith in humanity and helping the oppressed: “In the 1960s, Wiesel took up the challenges faced by Soviet Jews trapped in the atheistic and oppressive union”(Gale par. 9). Instead of giving up on his faith, life, and ultimately himself, Wiesel chose to fight for the people who couldn’t afford to voice themselves. Standing up for, freeing, and pushing away the obstacles caging those who lacked a voice makes him a true hero. As one of the most inspirational figures in the world, Elie Wiesel not only rebelled against his own death, but he persevered to make sure that others did not wind up with his same fate. 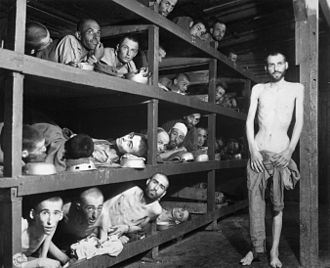 Wiesel is in Auschwitz. He is on the second row from the bottom and seventh from the left.https://en.wikipedia.org/wiki/Elie_Wiesel#/media/File:Buchenwald_Slave_Laborers_Liberation.jpgElie Wiesel earns the title of hero because he displayed selflessness in spite of the hunger he faced, the knowledge of his father’s inevitable death, and the advice given to him by the block leader of the concentration camp. While Wiesel tried to nurse his father back to health with his personal ration of bread and soup the block leader advised him: “‘stop giving your ration of bread and soup to your old father. You cannot help him anymore… In fact, you should be getting his rations…’ He was right, I thought deep down not daring to admit it to myself...You could have two rations of bread, two rations of soup… It was only a fraction of a second, but it left me feeling guilty”(Wiesel 110-111). Even though it appeared futile to nurse his father back to health, Wiesel’s iron will prompted him to take care of his father. Furthermore, Wiesel’s initial guilty feeling displayed that he overcame the temptation of a basic necessity in order to help a loved one avoid death. This display of selflessness makes him a true hero. Even after he was liberated, Wiesel maintained an altruistic personality. Through his unselfish behaviors, he helped many countries battle racism, sexism, and genocide: “Later, he would adopt other social causes and fight injustice in Cambodia, South Africa, and South America, establishing his reputation as an international ambassador for peace and freedom”(Gale par. 9). Even in later life, Wiesel put others ahead of himself. He selflessly fought for the rights of others, in spite of dangerous obstacles and pushed for their rights with no regard to his own well being. With this he made a positive impact on the lives of many. This concern for the needs of others over his own makes him an admirable and inspirational figure.

Wiesel at 2012 Time 100https://en.wikipedia.org/wiki/Elie_Wiesel#/media/File:Elie_Wiesel_2012_Shankbone.JPGDespite the towering obstacles before him, Elie Wiesel’s resolve helped him survive and fight for the rights of others. Wiesel’s escape from death during the Holocaust and his altruistic personality, displayed in his kind actions toward his father, showed that he stuck to his morals even when times were tough. Moreover, Wiesel exhibited perseverance through his desire and determination to raise awareness of the horrors that had occured in the world. Without thinking of his own safety and well-being, he displayed selflessness through fighting for the oppressed and those who did not have a voice. Elie Wiesel is inspirational because he possessed two highly valued traits of American society: perseverance and selflessness. Although he gained fame and fortune, he did not waver from his ultimate goal of winning others the freedom they deserved. Though he was put into life-threatening situations, Wiesel continued to make courageous decisions. Elie Wiesel inspires me because he had the determination to fight for others as well as himself. His heroic actions inspired me to co-found a chapter in a global organization called AID India that works to protect the rights of people in rural areas of India. Instead of finding a better life for only himself upon gaining his freedom, Wiesel chose to fight for the oppressed. Elie Wiesel is the type of hero who will stand up for someone, even when they can’t afford to stand up for themselves. Imagine if everyone had a friend like him to guard their backs. Alas, there is only one Elie Wiesel in this world. However, we can always inspire ourselves with his story. After all, a hero is an ordinary individual.