by Michelle Sze from San Diego, California in United States 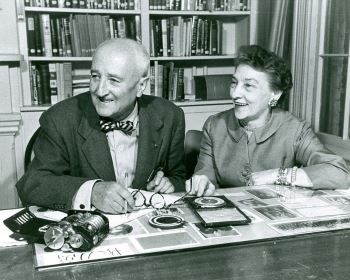 Elizebeth and her husband, William, working together on deciphering codes. https://www.capitalcommunitynews.com 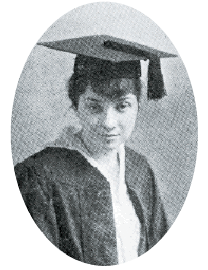 Elizebeth Friedman's college graduation picture of 1915.https://hillsdalecollegian.comIn the early 1900s, the norms in society were set that only men were allowed to attend college and acquire a job requiring intelligence. Women were not supposed to get a formal education and denied jobs of aptitude. It was at a time and place where men were to thrive and women to be ignored of their intellectual potential. Elizebeth Friedman, a woman who set out to be more than society’s standard, worked industriously to become one of the world’s greatest codebreakers. After attending and finishing college in 1911 with a degree in English, Elizebeth Friedman was denied jobs pertaining literature. Eventually, George Fabyan offered her a job deciphering codes within Shakespeare’s plays. Over ten years later, she became a codebreaker for the government and took on many challenges, deciphering numerous codes, and revealing illegal smuggler's messages. Friedman went on to become a spy for The United States government during World War II, taking down a Nazi spy ring. Her strong desire to acquire new knowledge enabled her to face challenges despite obstacles and try new strategies to solve problems regardless of uncertain outcomes. Elizebeth Friedman was a codebreaker who fought her way through sexism to work in a man’s world with perseverance and curiosity to establish the platform of modern coding.

Friedman demonstrated perseverance when people and circumstances tried to go against her, but she pushed through and succeeded in achieving her goals. She crossed paths with abundant obstacles during her time of codebreaking, but Friedman was able to crack a code no matter how difficult the circumstance: “She complied and eventually testified in the trial of Gordon Lim and several other Chinese. Her solution to a complicated unknown Chinese enciphered code, in spite of her unfamiliarity with the language, was key to the successful convictions” (“Hall of Honor”). Despite not knowing the language, Elizebeth Friedman was able to crack codes in Chinese. To begin with, breaking codes is already a challenge; hence breaking codes in an entirely different language becomes is incredibly arduous. Others would give up because they would be confused on what they are looking at, but Friedman is able to look past what she could not recognize. Seeing symbols and patterns at different angles, pairing them with her intelligence, and never giving up, she demonstrates perseverance. The lack of knowledge in a strange language does not perturb her from overcoming the hardship to solve the mystery. Breaking the code and testifying against the Chinese gave proof to her perseverance through and through. Before Friedman’s breakthrough on the Chinese codes, her husband and she joined the government team with her husband's work being credited and recognized first before her: “As she put it later, “By the end of the war I was more or less known as a military cipher expert, but I was better known as the wife of my husband[...]”(Fagone 115). Friedman thought that she would never be known as a codebreaker. She later re-entered the world of code breaking and encountered her fame with the breakthrough on the Chinese codes: “She was now the most famous codebreaker in the world, more famous than Herbert Yardley, the impresario of the American Black Chamber. And she was more famous than her husband, too -a reversal from the longstanding pattern”(Fagone 169). Elizebeth Friedman’s skill was initially not recognized in the shadow of her husband’s due to sexism, leading her to believe that she would never be as great as him. However, the tables turned later in life and she became the most famous codebreaker. Her accomplishment was finally recognized. Friedman exhibits perseverance once again when she rose rises above sexism and her husband’s accomplishments, making a name for herself. In reality, others would use sexism as an excuse, justifying themselves to simply be the wife of their husband. Friedman toils industriously and perseveres to overcome society's definition of a woman.

Elizebeth's work Mandarin codes. The Woman Who Smashed CodesWith each opportunity of change, Friedman expresses curiosity as she transfers from one job to another, digging deeper into the unknown sphere of knowledge of her work. Tappan, a writer informs her readers about how Friedman challenges a strongly supported theory of her boss, Fabyan, to reveal the truth. “[They] soon realized that Fabyan's theory that Francis Bacon wrote Shakespeare's plays was crazy and that Fabyan was crazy, too. This steeped them in cryptanalysis. They were looking for patterns that turned out to be meaningless. Exposure to these false patterns made the Friedmans want to know how to find true patterns. They were geniuses at that”(Tappan). Friedman had been working on a theory about messages written in code within Shakespeare’s plays. She was instructed to only support and not question it. Her inquisitive mind led her to realize that Fabyan was asking her to look for messages that were not actually there. Curiosity helped her to dig deeper into deciphering codes, exploring how to find messages that were truly embedded in code. She was specially gifted with an eye for real patterns, allowing her to uncover the real messages. While others did as Fabyan told since he provided housing, food, and pay, but Elizebeth decided to find the truth. She eventually left Fabyan’s estate, Riverbank, to use her skill to uphold the law: “The early messages were elementary and quick to break. But as time went on and profits climbed, larger and more sophisticated syndicates took over the distribution network, and coding systems became more and more elaborate. In the first three years she and her assistants solved 12,000 messages using dozens of different schemes”(Chiles). Friedman’s curiosity had led her to codebreaking for the government. She broke codes that exposed illegal smugglers of their whereabouts. During her time cracking the 12,000 messages, her curiosity continued to help her to further develop her talent and come up with different methods to break the increasingly elaborate codes. Unlike others who would declare a difficult code undecipherable, Elizebeth Friedman’s curiosity enabled her to foster a strong desire to work at the laborious task and use different angles to solve the mystery. Others would later build off of Friedman’s approach to codebreaking, adapting it to solve codes after her death and modern coding. Friedman’s curiosity brought her the fame of being the best codebreaker who discovered truth in codes and took down numerous smuggling ring leaders. 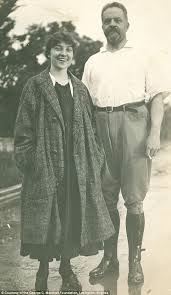 Elizebeth and her former boss, George Fabyan, at Riverbank. dailymail.co.ukElizebeth Friedman’s curiosity and perseverance steered her through her careers, which showed men that her techniques were just as good as theirs, if not better. She started out as an educated woman, being denied job after job, but never gave up.  Slowly climbing her way up, she became the first woman to run her own codebreaking unit, leading her to apply her deciphering abilities to a career as a spy. Elizebeth Friedman's perseverance and curiosity taught her how to defeat barriers and establish her place professionally in a man’s world: “When he first took charge of the bureau in 1922, there had been three female agents. He got rid of them. The next two female agents wouldn’t join the bureau until after his death in 1972. [....] What he required was the full assistance of a mature codebreaking organization, whether they wished to help him or not. He needed Elizebeth and the coast guard”(Fagone 203-206).  Even though Hoover did not think women were fit enough to work in a job that required intelligence at the bureau, he and the other male agents did not have the knowledge of a codebreaker. He needed Elizebeth because she was capable of decoding and the best fit for the role than anyone else. She inspired other women to rise up and do more than what men said females could do. Friedman proved to the world that women are much more than clerks, secretaries, and housemothers. Her work as a woman in the 1900’s continues to influence women to fight for the equality they deserve. Friedman’s inquisitive nature generated her consistency in discovering the truth, lifting covers and masks. She sparked other women to find their own path, disregarding family, friends, or society’s expectations of them. Elizebeth Friedman encouraged women to become confident in their work and push to reach their goals. Friedman’s life demonstrates and convinces individuals that nothing is out of reach as long as they possess insatiate curiosity and steadfast perseverance.

This Woman Saved the Americas From the Nazis - An article that recognizes Elizebeth's achievements and reviews her journey through code breaking.
‘The Woman Who Smashed Codes’ - This website reveals how Elizebeth Friedman isn't forever forgotten after Jason Fagone releases a book,“The Woman Who Smashed Codes: A True Story of Love, Spies, and the Unlikely Heroine who Outwitted America’s Enemies.”