"Find out who you are and be that person. That's what your soul was put on this Earth to be. Find that truth, live that truth and everything else will come." 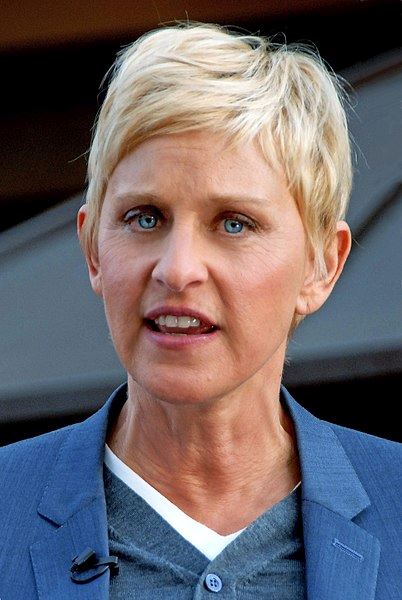 Ellen DeGeneresToglenn [CC BY-SA 4.0 (https://creativecommons.org/licenses/by-sa/4.0)]Imagine being criticized for being the person you are meant to be. When Ellen DeGeneres came out as lesbian in 1997, she was told it was wrong to live her life that way. DeGeneres is a leader and an advocate for the LGBT community who believes in equality no matter the sexual orientation. When DeGeneres became a young adult, she started working as a waitress, she sold vacuum cleaners, she painted houses, and she worked as a secretary. That was before finding what she was truly passionate about: being a comedian, an actress, and a talk show host. DeGeneres was recognized after earning herself the name “Funniest Person in America,” and she even experienced jealousy from other comedians. In the 1990s, she became the lead of the television series Ellen. DeGeneres bravely came out on this series, which helped spread the message that it’s okay to be who you are. Shortly after, her career followed up with a downfall that brought an end to her television show and advertisements. After getting her career back on track, she started her talk show, called The Ellen DeGeneres Show, in 2003. In 2016, DeGeneres was awarded the Presidential Medal of Freedom for taking down social barriers (“Ellen DeGeneres.” Newsmakers). A hero is someone who is courageous and who works for the happiness of others. With her uplifting spirit, she instilled courage in the hearts of others who were enduring the same hardships as herself. This should not only make her a hero to the LGBT community, but to everyone.

The uplifting spirit of DeGeneres spreads happiness and joy while opening the eyes of others to see we are all similar. She always wanted to bring happiness to people and did this mostly through her talk show. DeGeneres once stated, “...It's not my job to get into an argument with somebody about religion or politics or sexuality or anything. It is my job to make people laugh” (“Ellen DeGeneres.” Newsmakers). DeGeneres’ parents divorced during her teenage years, and even as a young child, she used her comedic skills to bring joy into her mother’s life. When DeGeneres saw her mother grieving, she would make her laugh until all that was left was happiness. She later incorporated these skills into her talk show, which combines an entertainment show with uplifting messages. She aspired to spread joy to everyone who watched. Years after DeGeneres said she was lesbian, she explained in Tulane’s commencement speech, “I lost my career. The show was canceled... Yet I was getting letters from kids that almost committed suicide but didn't because of what I did” (“Ellen at Tulane Commencement 2009.” YouTube). When DeGeneres told the truth about her sexual identity, her show and her advertisements ended. Due to disagreement between herself and society, DeGeneres lost success for three years. On the other hand, she provided kids who became suicidal with the courage they needed to keep on going. During the same time as most of America saw DeGeneres as a bad influence, she was saving the lives of kids who were struggling with their identity. In this same speech, DeGeneres reminds us to stay true to ourselves and everything will be okay, just how DeGeneres came out after she told herself to stop living a lie. 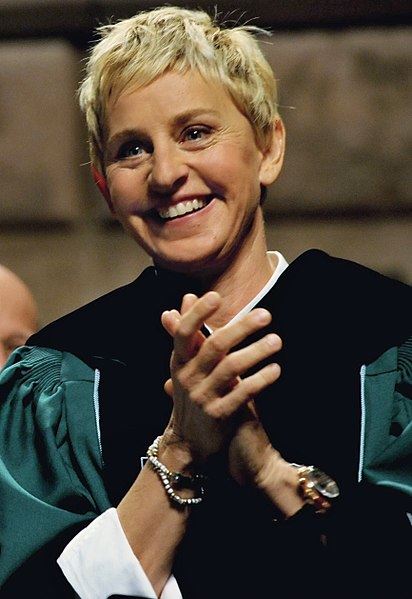 DeGeneres at Tulane UniversityTulane Public Relations [CC BY 2.0 (https://creativecommons.org/licenses/by/2.0)]When DeGeneres came out during a conservative time on her television series, she wanted people to know that it’s okay to be yourself. She sacrificed and lost her career, but on the other hand, helped many influencers in the same position, which makes her courageous. DeGeneres did this to address the fact that it is okay to go against society’s standards of love between man and woman: “It was a risky decision for DeGeneres, but in making it, she has made it less risky for future artists and performers to follow suit” (“Ellen DeGeneres.” Contemporary Authors). DeGeneres didn't know how her audience would react, yet was brave enough to come out. By doing so, she took one of the first steps into introducing gay rights and lost many fans because of their different views. The amount of courage she had to do this on a popular television show took pressure off other influencers who wanted to do the same. For example, country singer K.D. Lang came out without a downfall to her career like what DeGeneres had to face ("Ellen DeGeneres." Contemporary Authors). For these contributions to society, she was awarded the Presidential Medal of Freedom. In 2016, Barack Obama announced during the awards ceremony, "It’s easy to forget how, when we’ve come so far, where now marriage is equal under the law, just how much courage was required for DeGeneres to come out on the most public of stages almost twenty years ago...To see somebody we liked so much...challenge our own assumptions. Remind us that we have more in common than we realize" (“Ellen DeGeneres.” Biography). By coming out on public television, DeGeneres has guided our society towards justice. It is uncommon for an influencer who is rapidly increasing in fame and success to risk it all. In 1997, being part of the LGBT community was a foreign way of living and brought criticism and disapproval, and for DeGeneres to come out during a time like this proves that she is courageous. DeGeneres strongly encouraged inclusion of all people and to be who you are. By doing this, DeGeneres was able to open the eyes of others to see we are all created equal.

Ellen DeGeneres embodies a hero because of her encouraging and strong personality that helped bring our society closer to justice. DeGeneres was willing to put her career in danger to inform people that it’s okay to be who you are. This helped other influencers follow her path and save the lives of people struggling with their identity. She helped make people more open-minded to see we are all equal. Even after she was discriminated against, she found courage to make a comeback in her career and achieve things that surpassed how successful she was before. She used her new opportunities to bring joy and happiness to others through her talk show. DeGeneres is an inspiration because she encourages people to be more inclusive and not judgmental. She once expressed, “...I am saddened by how people treat one another and how we are so shut off from one another and how we judge one another, when the truth is, we are all one connected thing” (“Ellen DeGeneres.” Biography). She reminds us to include people despite our different views on life. She inspires me to be even more open and inclusive to new people in our diverse country. It is easy to judge someone simply because of our differences, but as we begin to come together, we realize our similarities outweigh our differences.