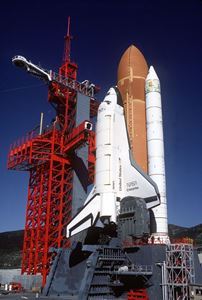 EnterpriseMy Hero libraryThe first Space Shuttle Orbiter of 1977 was originally to be named Constitution (in honor of the U.S. Constitution's Bicentennial). However, viewers of the popular TV Science Fiction show Star Trek wrote to the White House, persuading officials to select the name Enterprise.

‘Designated Enterprise (OV-101), the vehicle was rolled out of Rockwell's Air Force Plant 42, Site 1 Palmdale California assembly facility on Sept. 17, 1976. On Jan. 31, 1977, it was transported 36 miles overland from Rockwell's assembly facility to NASA's Dryden Flight Research Facility at Edwards Air Force Base for the approach and landing test program.

The nine-month-long ALT program was conducted from February through November 1977 at the Dryden Flight Research Facility and demonstrated that the orbiter could fly in the atmosphere and land like an airplane, except without power-gliding flight.’*

For more information on the Enterprise, visit: science.ksc.nasa.gov/shuttle/resources/orbiters/enterprise.html

For more information about space travel, check out our space week organizer, which is a collection of stories, films, photographs and art celebrating pioneering scientists and explorers who bring us a deeper understanding of space: World Space Week.