by Praneel from Saddle River, New Jersey in United States 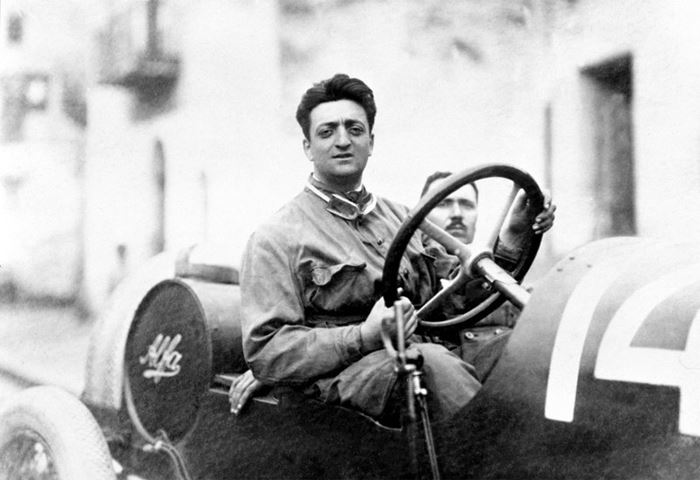 “What’s behind us doesn’t matter.” Try to think of one person who would have said that. Probably someone determined, or courageous, or someone to whom many things have happened in life. There are many great people in the world who have pushed on through determination and courage. You might think of Bill Gates (a school dropout), Albert Einstein (Got kicked out of school because of deficiency), and Steven Spielberg (did not get into the film school of his choice), but did you ever think of someone who made a car company? Enzo Ferrari has his name immortalized in racing and car history, but those flashy, red, expensive cars have little to do with his life. Did you know that Ferrari did not want to make passenger cars that anyone could buy? He was born in Modena, Italy, and his dad owned a metal contracting business and sent Enzo and his brother to learn his trade. Enzo was not very serious about his studies and failed. Later on, his father took Enzo to a race. That was what sparked his interest in racing, and he started moving towards that goal. All he cared about was racing, and only made race cars until the funds started to deplete. This is when he started to make passenger cars. He was a very successful man and even has the Ferrari Enzo car built in his honor after his death, but he had many hardships in life as well. Even despite these hardships, his determination, courage, and patience helped him push through and form the legacy that Ferrari is today.

As said before, one of Enzo’s greatest traits is determination and he displayed this characteristic a lot of times. One example is when he was little. His parents did not discourage him from racing, but they did try to make him and his brother become metal contractors like their dad. All Ferrari wanted to do was race, so he failed, but his parents kept making him go to the school for learning the business until his dad passed away. He also displayed this characteristic when many of his races left him depleted of money and resources, and there were many deaths in his life. Lastly, he displayed determination when recovering from a fatal disease, and fought it valiantly, because he really wanted to race. These examples are just three of the many times Enzo has overcome hardships using determination. He did not only have determination, though, that isn’t the only reason that Enzo Ferrari is my hero.

One of the other characteristics that Enzo displayed during and before his career is courage. He was very courageous and showed his courage many times. One example is when he vowed revenge against Fiat, the largest car company in Italy at the time. When he went to try and work for Fiat, the manager of the factory rejected him. It was post-world war and many people were scrambling to get a job, so Fiat did not accept any more people until that period ended. When Enzo was rejected, he was very mad and vowed revenge against Fiat that he would turn out to be better than them, and he did turn out to be better than Fiat. He also had the courage not to give up when he was drafted in the World War and did not give up on his dream because he might die or because he might get severely injured. He kept going. One last way he showed courage is when one of his friends and many test drivers lost their lives driving Ferrari cars. He did not lose heart and was not weak minded, and so he kept going despite these deaths. As you can see, if Enzo was weak-minded and didn’t have the courage do these things, Ferrari probably would not exist.

The last characteristic in this essay that Enzo showed is patience. He showed patience first when many of his cars failed. He did not give up of frustration when these cars that he put hours of building time into. Also, going to races cost a lot of money, and when Enzo was running out, he started building passenger cars he could sell with the resources and money he had, and he didn't give up because of frustration again. Another time he showed patience was during his son's funeral. He was leading a double life and had 2 wives that didn't know about each other. At one of his son's funeral, the wives found out about each other and couldn't believe Enzo was keeping this from them. So they started grilling him with questions and this on top of his son dying made him feel very stressed. Still, he was patient, and his patience helped him push through all of these obstacles.

As you can see, even though Enzo Ferrari is only a car manufacturer, he is a hero for some very good reasons. He was determined, courageous, and patient. He showed determination when he had to endure many hardships, he showed courage when he might have been weak minded and abandoned his dream, and he showed patience when he might have given up with frustration if he didn’t have patience. All in all, if he didn’t have these traits, and if he did not push through with these characteristics of his, he wouldn’t be the legacy he is today.