by Maya Sanchez from San Diego, California in United States

“A real hero, a hero who deserves (a) biography, autobiography or memoir is someone who may attract attention but directs that attention beyond himself or herself and reflects in their daily lives everlasting values” (Harper). In the essay “How We Chose Our Heroes,” Charles Harper justifies that a hero furthers society by displaying respectable principles. We look to these heroes for how to behave and how to be heroic ourselves, as they lead us with exemplary actions. These heroes exist in our everyday lives, whether it is a kind person who helps an elderly woman with her groceries or a brave character that saves a trapped individual from being crushed by his or her car. When they are caught in a predicament, heroes show determination towards finding a solution and essentially “saves the day”. Through their beliefs and actions, heroes embody lessons such as “stay true to yourself”. They demonstrate bravery and peace, two of the many traits which appeal to our society. Anyone can be a hero. We do not need to possess extraordinary superpowers like the Flash and his incredible super-speed. We do not need to acquire fame, but rather need to obtain pure values and make a difference out of the goodness of our hearts. Only then can we be true heroes. 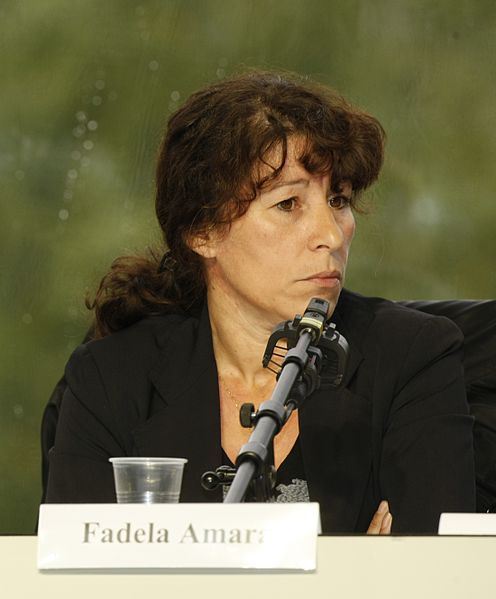 Photo from https://commons.wikimedia.org/wiki/File:Fadela_Amara_-_4_septembre_2009.jpgWikimedia CommonsHeroes are not always born as valiant beings who challenge the means of society, but instead are shaped into one later in life, such as French feminist and racism activist, Fadela Amara. Amara grew up in the ghettos of Clermont-Ferrand, France where she lived with her parents and ten siblings. Poverty was all she had ever known. Her parents were immigrants from Algeria, and they were illiterate. However, Fadela and her siblings all went to school and placed a high value on their education. Although she never graduated from high school, Amara became very successful as she took an interest in feminism and the abolition of racism. She faced a great amount of discrimination because she was Arabic. On top of that, she experienced sexism which was not taken seriously like it is today. Amara believed that the only way to effectively eradicate racism and sexism was to be in a position of power. In 2007, she was elected as Secretary of State for urban policies. She believed that politicians were being cowardly and neglecting ethnic ghettos that were in dire need of their help. She stood up for these communities during her time in office and served as proof that even a petite Muslim woman could greatly impact the world. By dedicating herself to the progression of her country and utilizing her authoritative positions to represent minorities, Fadela Amara proves that she is a hero by fearlessly speaking her mind and making a difference without the use of violence. She inspires the world through her courageous attitude and peaceful approaches, ultimately making her memorable throughout all of time. 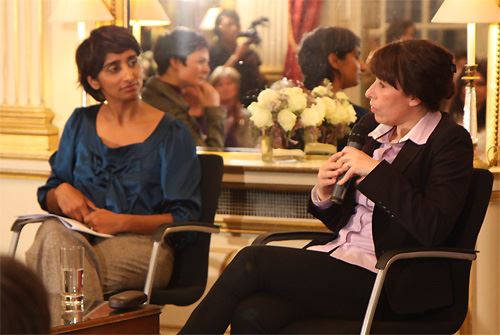 Photo from https://www.flickr.com/photos/ukinfrance/4425041704/FlickrWhen others cower in fear, Amara’s bravery radiates as she confidently stands up against discrimination. In order to keep a promise she made to her country, she has never held back the truth whatsoever in a morally unjust situation. She did just that by calling the government “disgusting” for suggested the idea of DNA testing on immigrants. This comment caused an uproar, and she was encouraged to resign from the government. However, Amara was unaffected by the threats she received and responded, "‘I'm a free woman. Never forget that. The day it becomes intolerable for me, I'll just get up and leave. Let it be clear - I was never asked to and have no intention of sweetening or whitewashing my opinions. If I have to bite, I'll bite’" (qtd. Primor). Amara intends to keep her promises. Besides, being brutally honest is what she is known for. Amara’s confidence amplifies her courage, as displayed when she states that she is prepared to “bite”, or in other words, passionately defend her actions despite repercussions. She knowingly did this even though her position of power was revocable. She stood out from other candidates because of her "gutsiness", and that trait is what got her elected. While her approach can be aggravating to some, it packs the right punch. Amara grew up during a time where women were treated unequally. A man had rights to a woman’s body, the clothes she wore, and the people she associated herself with. So when Amara disagreed with society’s norms, she faced incredible backlash. However, she never let the hate affect her and used to it as motivation instead. Amara made it abundantly clear that she has no intention of backing down from the fight for her rights: "‘Anyone blocking the emancipation of women has to be fought. I don't give a damn if they're Muslim, Catholic, whatever. For me, if they're fighting against women's liberation, they're fighting against me.’" (qtd George). Amara proves that she is not afraid of anyone in her path, regardless of religion, because she is completely focused on achieving emancipation. As a woman with an unpopular opinion, Amara exemplifies her bravery by standing firmly for what she believes is righteous. By doing this, she proves the matter is crucial and needs to be taken seriously. While others take hate and bottle it inside, Amara looks for ways to rid herself of that feeling. With her courageous outlook on tackling difficult tasks, Amara displays admirable heroism. 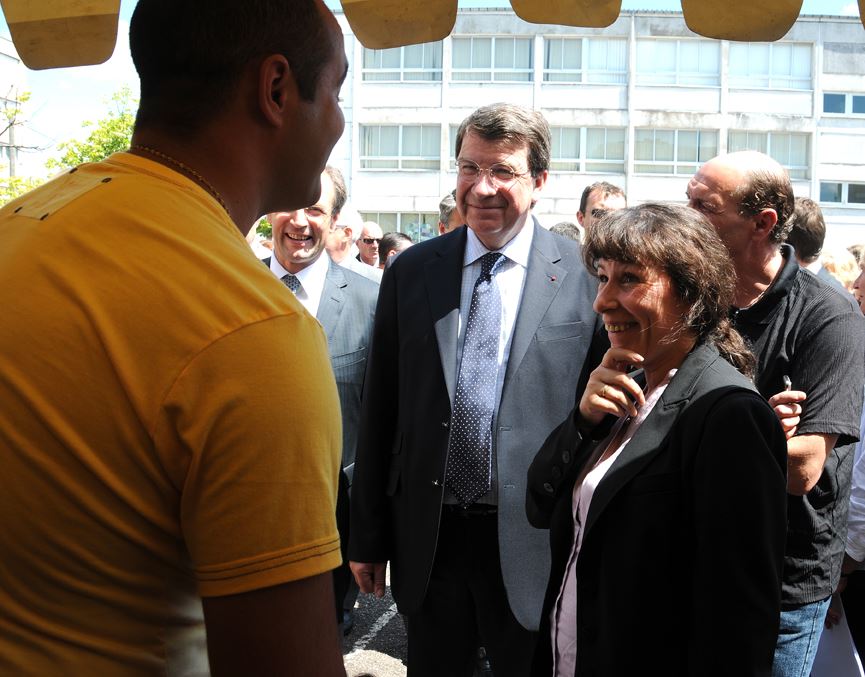 Photo from https://commons.wikimedia.org/wiki/File:Amara-Darcos-Luneville.jpgWikimedia Commons Amara’s nonviolent protests provide hope and insight for her country, granting them a more promising future. Growing up, she had experienced a lot of childhood trauma involving sexism and racism. Further, it does not help that she is a minority who lived in the ghetto of France. In 1978, Amara’s brother was killed by a hit-and-run drunk driver when she was only 14 years old. Her family received no help from the police since they were immigrants. When she went to report the homicide, the police sided with the driver: “‘The cops called us bougnoules [a derogatory word for Arabs and Africans], and treated us like dirt just because we were from the Maghreb. It was like an electric shock. That was the moment when I decided I wanted to fight against all forms of injustice. The first battle for dignity is in housing.’” (qtd Yuk). Although she could have rioted like many citizens have in the past, Amara chose to use this scarring incident as her motivation to push on, instead of channeling her anger for violence. Amara stated that she first took on the “battle” by petitioning for better housing. She used peace and protest to make herself heard and ended up being successful in her petition, essentially proving that it is never necessary to abandon your morals to achieve an ambitious goal. Tragedy tends to follow these types of revelations, and some left Amara feeling personally attacked. The fact that a girl was gang-raped and another burned to death appalled her, especially since it took place in the neighborhood that she grew up in. As a result, she organized a women’s rights march to honor their lives and fight for equality and better conditions for public housing in ghettos. Throughout the march, the slogan “Ni Putes Ni Soumises,” meaning “neither whores nor submissive,” was repeated. The prime minister, Jean Pierre Raffarin, was moved by the message and ended up approving the creation of safe houses and pilot sites for citizens in danger and women to be heard and taken seriously, more teachers for housing projects and schools, training seminars for women to pursue their interests, and provisions in police stations for victims of violence (“Ni Putes Ni Soumises”). Although violent events had occurred, Amara responded without brutality, properly honoring the two girls. By following through with this movement, women ended up gaining rights by marching peacefully. The government would likely not have reacted the same way if it were a more forceful approach. Amara influences change by remaining faithful to her pure morals, therefore improving society one step at a time.

Through her fearless demeanor and irenic notions, Amara validates that her so-called absurd objectives were, in fact, achievable. Even though she is resented by some due to her contrasting beliefs from society, Amara never turns to violence and holds her head up high when she is constantly faced with hate. She uses anguish as a motivator rather than another reason to wreak havoc. Amara is explicit, never afraid to say what needs to be said. Her fortitude and non belligerent efforts inspire others, as these actions are solely for the benefit of her people. During an interview for the Financial Times, Amara was asked if she believes that the reason she was appointed Secretary of State was simply because she added diversity to the government:  “‘I am a woman, a minority, someone from the poor banlieue and a socialist. Through me, there are many symbols. And if Mr. Sarkozy, former president, wants to appropriate these symbols, all the better. All the better because it shows that you can be a woman, an immigrant and be from the banlieue and succeed. We need this visibility. We also need someone who is willing to take concrete action.’” (qtd Yuk). Amara, aware of Sarkozy's tactics, exploited her position to empower France. She led her country through adversity, immediately responding to issues and eradicating them. In my eyes, Amara is a genuine hero. She has motivated me to defy gender stereotypes that I have felt trapped under my entire life. As a young female in today’s society, I have been objectified on several occasions and told that my clothing made me a "slut". When I turned for help, many shrugged and said “boys will be boys”, as if that excuses their damage on my self-esteem. This is not to say I am now magically free of my insecurities, but rather when I am feeling helpless, I have a role model to turn to. Amara is human like you and I- but what makes her remarkable is her devotion to making the world better than when she entered it.

Ni Putes Ni Soumises - Amara founded the movement, "Ni Putes Ni Soumises," that fights against violence and social standards, especially towards women.
2003 Women's Rights March - These are photos from Amara's women's rights march in 2003, where she honored the lives of two abused women.
Urban Policies of France - Fadela Amara was secretary of state for urban policies from 2007-2011.