Though the names of Erykah Badu and James Brown are far more recognizable than Fela Kuti's, they owe much of their musicianship to his influence. Scores of future musicians and leaders watched Kuti rise and fall under the oppressive Nigerian regime, and his spectacular music and fiery political acts have made his life legendary.

Fela Anikupalo Kuti was born in Abeokuta, Nigeria, on October 15, 1938. From his childhood, Fela was interested in music. He left Nigeria to study music in London, then returned to Africa to spend some time in Ghana. He started a band called Koola Lobitos. After experiencing success with that band, Fela visited America in the 1960's. It was there that he was exposed to leaders like Malcolm X and the Black Panthers, and began to develop his interest in politics. He said, "... at that time, when the [Biafran]war was going on, I wasn't politically minded at all. I made my comment as a citizen. I was just another musician playing with Koola Lobitos and singing love songs, songs about rain ... What did I know?"

Fela educated himself on the politics of Nigeria and the African diaspora. His music began to address issues of the Biafran war and the failings of the Nigerian government, setting him up as a target. However, despite intimidation and attempts on his life and the lives of his family, Fela never stopped being an outspoken adversary of the government. Instead, each incident further fueled the fire of his music.

Fela's music evolved into his masterpiece genre, "Afrobeat." Using his jazz and soul background and adding African beats and instruments, Fela created Afrobeat to address the political issues that his previous bands had ignored. He changed the name of his club to The Shrine, and the name of his band to Africa 70. He wanted to play meaningful music for the people of Nigeria.

Fela died in 1997, at the age of 58. He is survived by his children, including his musician son, Femi Kuti. 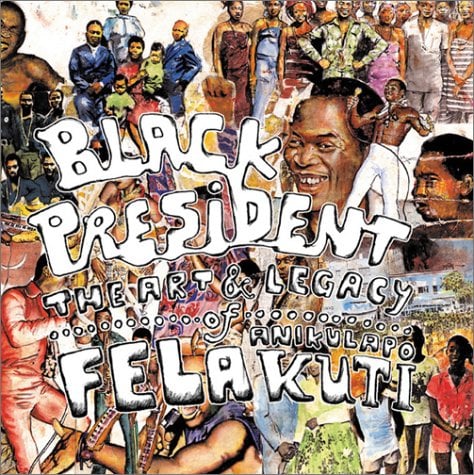