by Alessandra Suthar from Fredericksburg, Virginia

In the words of Felix Frankfurter, "She [Florence Kelley] had probably the largest single share in shaping the social history of the United States of the first twenty years of this [twentieth] century" (1953). Imagine a world with no minimum wages or controlled work hours. Without Kelley's advocating for social rights, our modern world would lack equality of both gender and race. Kelley lived during the transition from an agricultural economy to one driven by industrialization. As a young woman, Kelley witnessed the "social and religious tensions of the abolishment movement, the agonies of the war between states, [and] the passionate challenge end slavery" (Perkins, 12). During the twentieth century, American culture shaped her craving for justice. Florence Kelley is an unsung hero who was passionate and acted with utmost selflessness, was determined to affect the lives of many, and was never afraid to advocate for a cause seldom discussed. 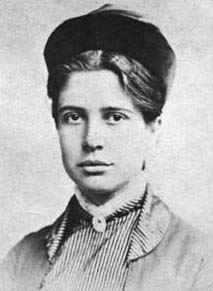 Young Florence Kelleyhttps://en.wikipedia.org/wiki/Florence_KelleyDaughter to William Darrah Kelley, Florence Kelley was encouraged to yearn for a state with abolished racial disparities. Because her father was a Republican member of the House of Representatives, he read books detailing the lives of young English children working under the harsh grip of cheap labor. Florence Kelley's desire to allow for the welfare of factory workers resulted from her father's fundamental beliefs of socioeconomic equality. To further her established concern for the exploitation of child workers, she attended Cornell University and wrote her thesis on the abuse of children working in manufacturing. Kelley then attended the University of Zurich and "served as a refuge for socialists, anarchists, and radicals, who fled their country home due to fear of persecution" (Clark and Foster, 2). Here she selflessly advocated for regulated socialism, a system where safety and economic equality took precedence over cheap manufacturing. People were being used as pawns in the hands of manufacturers to gain easy capital, thus, the proper treatment of workers was neglected. Due to overly long work hours and fatigue, many children were dying of respiratory infections. Harsh work environments contributed to the horrifying maltreatment of the young girls. Many girls were falling victim to "seduction, assault, and enslavement in infamous houses" (Kelley, 2). The idea of the growth of "cheap hands and product," rather than the growth of "human culture" (Kelley, 397), appalled Kelley and inspired a personal awakening. Although Florence Kelley never experienced degradation nor any form of exploitation in her workplace, she acted with selflessness and championed an issue seldom discussed in the late nineteenth century.

For Kelley to truly be passionate about this cause she had to experience it. Between Kelley's studies at Cornell and at the University of Zurich, she had an inflection moment in her career that would reveal her determination to protect those whose rights were distant. For graduate studies she applied to the University of Pennsylvania, however, she was denied enrollment due to her gender. Instead of simply being an observer of unjust behavior, here Kelley experienced what it was like to become a minority denied their rights. To remedy the rejection from her school, Kelley joined the New Guild for Working Women. This organization provided aid and education to women who were in the workforce. She became more versed in the social crime against gender in the early twentieth century, a century without any meaning of social justice. This journey shaped her future passion to effect social change.

In addition to her selflessness, Kelley advocated for her beliefs even when she was discouraged (Athey, 6). Following in the steps of her great aunt Sara Pugh, who detested the lack of social justice, Kelley, too, emphasized the unjust treatment due to race and gender. After William English Walling and Mary White Ovington proposed that Kelley join the NAACP, she accepted with content. Her contributions to the NAACP were duly noted by African American rights activist W.E.B. DuBois, who said "always, she asked questions: pointing, penetration, devastating questions, and these questions she wanted answers and was herself more than willing to furnish questions by answers and inquiry of thought" (qtd in Athey, Louis L. “Florence Kelley and the Quest for Negro Equality.”). She devoted herself to the reform of African American inequality in the United States. The first passionate cause that she chose to address was Woodrow Wilson's inauguration of an act promoting segregation within the American government and legislature by removing all African American men. As she was accustomed to a government that promoted the integration of all races, Kelley was disheartened by this tragedy. She was inspired to extend the importance of cultural equivalence by speaking to public churches and at gatherings. Rather than avoiding the unjust perceptions and behaviors against color, she believed that the public must confront it (Athey, 250). Another issue that Kelley desired to eradicate was the limitations of education to any race or age. Kelley noticed a lack of inclusion of African American children in certain educational spaces where white children were welcome. She approached the National Education Association and proposed the "Stirling Discrimination Bill." This bill spoke to the injustices of education to differing races. Children needed access to knowledge. She dedicated herself to the protection of the civil liberties of African Americans and all children through advocating.

Our lifestyle would be considerably different without Florence Kelley. Women and children might still be marginalized and abused in factories, there would be no minimum wages, nor limited working hours. We gained our liberties once Florence Kelley advocated for them. To become a hero, one must be passionate about a certain subject, be an advocate, and then be determined to remedy it with selflessness--similar to how Florence Kelley approached her life. Kelley is the epitome of a hero who worked to better the lives of those who deserved happiness and liberty.