by Katie Lawrence from San Diego, California in United States 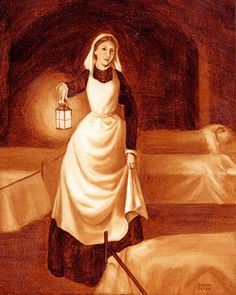 Nightingale is shown inspecting the condition of the patients in the hospital. She only has the light given off by the lamp to see. This is why she became known as the "Lady With the Lamp".sam-smith.netDuring the mid 1800s, a brave, selfless woman single handedly changed the inhumane conditions of hospitals. She is still well-known today, and her name is Florence Nightingale. On on May 12, 1820 Nightingale was born and named after the city she was born in, Florence, Italy. From her childhood, Nightingale knew she didn't want to live the life her parents wanted for her, the life of a social woman. “Though her wealthy parents expected Nightingale to entertain, practice sewing, and marry well, she seems to have felt ill-suited to that model of womanly goodness” ( Contemporary Authors Online para. 57). She felt the life of a lady would not suit her, and therefore chose a different path. Around the age 16, she felt a calling to start a career in nursing. “She also describes four different occasions, beginning when she was sixteen, on which she heard the voice of God calling her to a profession” (Contemporary Authors Online para. 57). After the call, she began to focus on answering it, leading to her become the hero is is known to be today. Her bravery helped her to overcome the obstacles brought along with her career, and her selflessness helped her to go above the average standards for her patients. Florence Nightingale is a hero because she was brave and selfless.

Florence Nightingale displayed much bravery in her life, and because of this bravery, she was able to save many sick and injured people. When Nightingale was alive, nursing was not perceived as an honorable profession, likely making the job seem less desirable for people to take on. “In 1844, however, nursing was not an honorable profession. Hospitals were scenes of incredible filth and associated with despicable people” (Lauer para. 4). 1844 was not a prime time to become a nurse because of the inhumane and unsanitary conditions of hospitals. Nurses faced hardships every day and weren't respected for their work. Nightingale was brave to choose a career such as nursing, considering all of its downsides, when she could have lived a comfortable life of a lady instead. Additionally, Nightingale not only nursed in ordinary hospitals, but at one point, she went to serve at a hospital near a battlefield when the Crimean War broke out. “Only a few months later, in March 1854, England and France joined the Ottoman Turks in the Crimean War against Russia…  a friend of Nightingale's, asked her to oversee the establishment of nurses in the field hospitals” (Farr para. 3). It takes bravery to become a soldier, and though Nightingale didn't fight on the battlefield, she fought to save the lives of those who did. Working in a hospital plagued with disease and infection takes bravery because the nurses were not guaranteed to leave the hospital after the war had ended unscathed, uninfected, or unharmed. In a way, Nightingale and the other nurses were soldiers themselves working around the clock for a selfless cause. Florence Nightingale’s bravery is one of her many heroic qualities, and is very easily identifiable in the work she’s done. 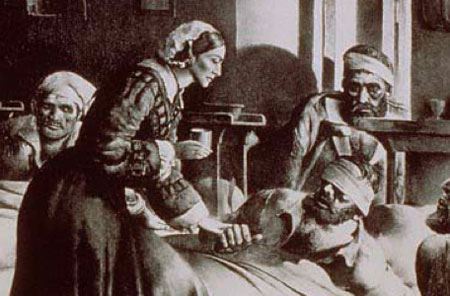 Nightingale is shown attending to sick and injured patients. timetoast.comIn addition to being brave, Nightingale was also incredibly selfless, as she dedicated her life to serving and saving the lives of others. Nightingale could have lived the comfortable social life her parents wanted for her and prepared her for, but she wanted to something more meaningful instead. “She and her sister Parnethope were raised to marry, throw dinner parties, and become shining society women” (Commire para 14). Most of her life, Nightingale was taught to sew, display good manners, and eventually, to marry well. However, Nightingale was always more fascinated with math and the way it could be applied to fix real world problems. The more preferred life for most, especially in the 1800s, would have been the life of a social woman whose only worry was to throw parties. However, Nightingale chose a more difficult path, the path of constant struggle because she wanted to help others. On top of nursing, Nightingale also played an important role in hospital reform. “She single-handedly changed the way English hospitals functioned and the way nurses worked within them. Her reforms spread throughout the world” (Lauer para. 1). Hospitals in the 1800s were very unsanitary and disorganized, leading Nightingale set out to change those ways. She took on a major task that ended up carrying into modern time. The reform Nightingale took on was not easy and she didn't expect praise for what she did; what she did was done out of the want to better the lives of others. Nightingale changed the ways hospitals function out of her selflessness. 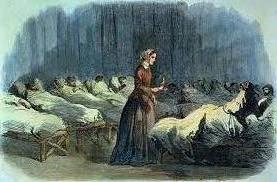 Nightingale is seen again attending to sick patients being able to see only by the candle light.pinterest.comHence, Florence Nightingale is a hero because she is brave and selfless, and because these qualities changed the world for the better. Her bravery lead her to defy the path her parents strongly influenced her to take, as well as work in a hospital neighboring a war. Her selflessness provided England, and later the whole world with more functional and sanitary hospitals. Florence Nightingale is an inspiration because she displays her heroic qualities in a way that seems so effortless, not expecting any rewards to come through in the end for her, but for others. Even after she had to stop nursing in hospitals because of an illness that later took her, she continued being an advocate for hospital reform. Nightingale may have passed, but she and her influence in the way hospitals are run will forever be remembered.