Frances Manuel, who was born in the early part of the 20th century, quietly changed the world of her people and the people she met through her basket weaving and cultural presentations.

by Deborah Neff, MY HERO Staff writer - Can be adapted for any grade, but especially Middle and High School students and adults - from United States 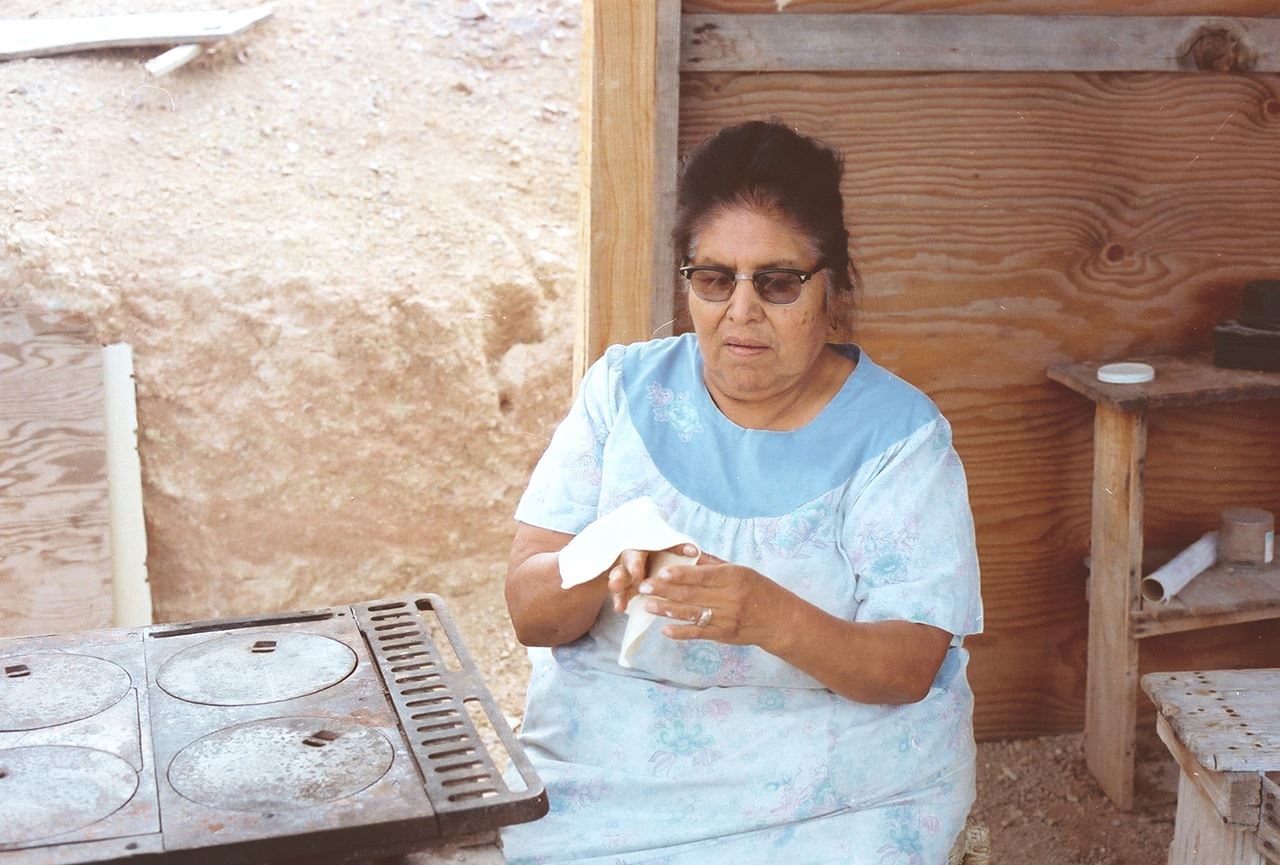 Frances making tortillas in her "Indian kitchen"Deborah NeffMy hero and the hero of many, Frances Manuel was a village elder, a “Desert Indian” of Tohono O’odham (“Papago”) and Seri descent. She was born in 1912 in a brush house in the Sonoran Desert, where she was raised by aging grandparents and taught the traditional ways of her people.

When I met her--many years ago, Frances was already an elder: a renowned traditional basket weaver, storyteller, and a great cook. Frances defied labels and boundaries by the way she lived and by the way she cooked, collecting foods like she did stories and jokes, resulting a special kind of mixing and blending that characterizes Southwest border history.

Frances was a humble preserver of Tohono O’odham foods, arts, and culture; a cross-cultural teacher; and a bridge between the U.S., Mexican, and Native American cultures of this desert borderland: this on behalf of her people, especially the children. Frances and I, in fact, met working in the public schools. I used to bring her into the schools to talk to the Native American children about her people’s history and culture. I was 23 and she was 60. I was non-Indian, from Philadelphia. Something clicked between us, leading to a decades-long relationship of mutual respect and unrelenting acceptance.

I have come to believe that Frances was a unique individual whose distinctiveness was forged in her solitude as a child and in her creative play. Maybe it was just in her nature to get involved in helping her people. A single parent of five, Frances took in foster children. She worked with alcoholics and the elderly, receiving numerous awards, such as an award for outstanding service by Save the Children and an award of appreciation from San Xavier Mission and the Papago Tribe, “in appreciation for the caring love which has enlightened our children in the awareness of O’odham heritage.” In 1977 she was distinguished as an “Arizona Living Treasure, Keeper of the Desert Treasure,” for her work to keep the unique knowledge of the Sonoran Desert alive.

Frances was a role model and mentor for many of her people. She was also my mentor; I am fortunate indeed. Over decades, I stayed at her ranch on the reservation outside of Tucson, often sitting outside with her in silence beneath a vast, desert sky, doing most of our talking around mealtime. It was during those long visits that I learned about her life growing up in a mesquite brush home in the middle of nowhere with her grandparents, playing with the birds and cactus and on only rare occasions, other children. 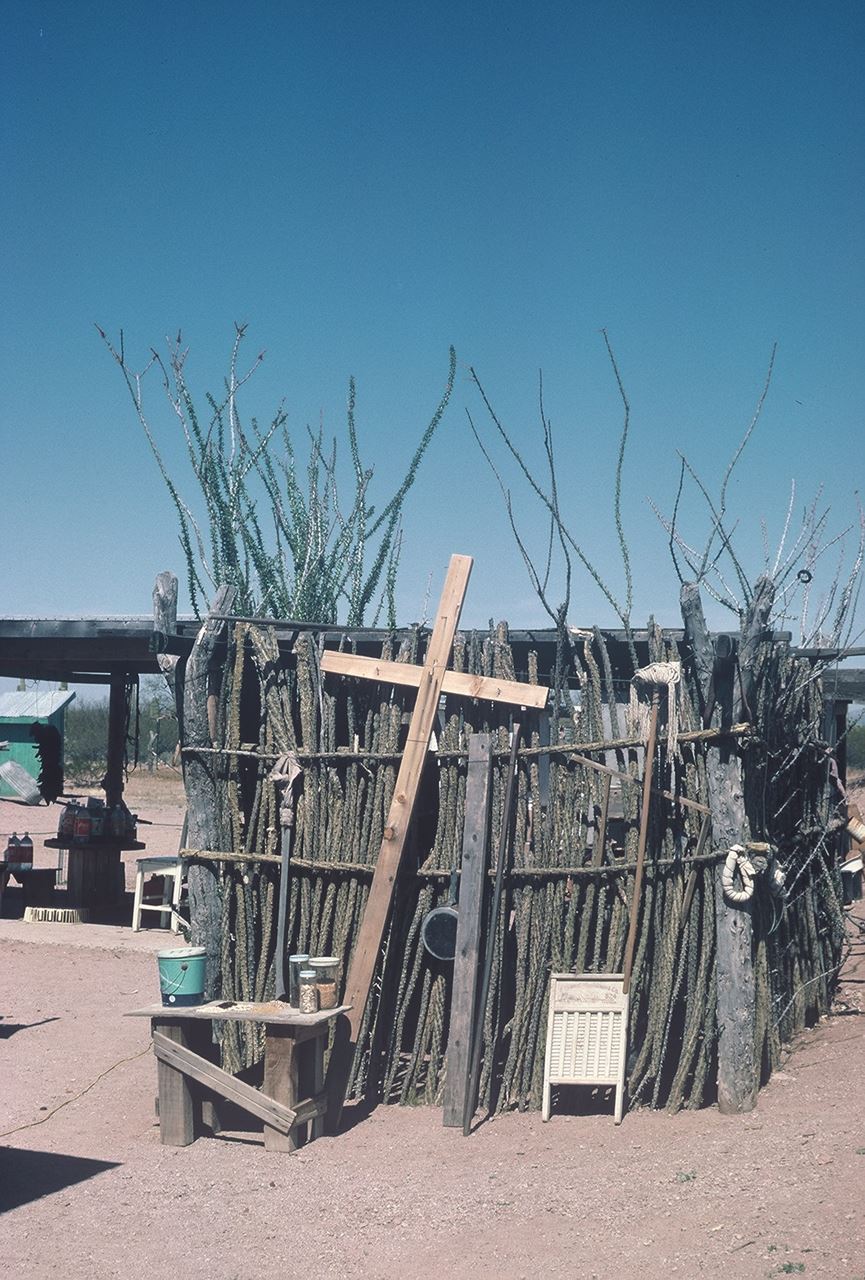 Frances' "Indian kitchen"Deborah NeffThe family grew many varieties of corn, beans, and squash. The plants were sung to and the people prayed and danced for rain. Seasonal growing and gathering cycles took place according to the moon. Along with farming, the family gathered a wide variety of foods from the desert, and hunted deer, rabbit, and other small game. Taught by her grandmother, Frances grew up grinding wheat—introduced by the Spaniards—on the metate; making large flour tortillas and preparing cholla cactus buds and saguaro cactus seeds in the traditional way. Her family was some of the last to practice substance farming full time, irrigating the land with water from running washes following the monsoons. They also had cattle and horses, introduced by the Spaniards.

As a teen Frances spent several years at Phoenix Indian boarding school where, after many years of isolation growing up, she developed a special friendship with a “war nurse,” an experience, she said, that taught her a lot about the Milga’an (American) culture and about who she was, she said, as a traditional O’odham.

She started off her married life with her husband Jose in his village of San Pedro, but in 1941 “the bad year” arrived in the Sonoran Desert: there was no rain: the crops dried up and many of the cattle and horses died, so Frances and Jose moved to Tucson to find work cleaning and washing dishes, which Frances supplemented with basket weaving. The bad year, with more drought years to come, initiated the disappearance of her people’s traditional ways of life, as Frances and her husband, Jose, along with other O’odham, began a life as urban Indians, working in town for the Milga’an.

Frances often talked somberly to me about the ways things had changed since she grew up. Commodity foods had replaced many of the traditional foods, and her people have come to have the highest incidence of adult-onset diabetes in the world. Poverty, alcoholism, unemployment, car accidents, domestic abuse, and suicides have plagued the reservation for decades, but were getting worse. “It is a world out of order,” Frances would say each time there was another tragedy in the village.

Yet while hers was a life of profound cultural displacement and loss, she persevered, mentoring young and old, reviving traditional O’odham music and dance and founding the Desert Indian Dancers (a children’s group). She taught O’odham cooking and basket weaving and co-authored a book with me about her amazing life, in her own words, transcribed from our many conversations.

For me, as a non-Indian, Frances’ mentorship helped to shape my way of being in the world, especially when I was in my twenties. She’d impart wisdom from the O’odham himdag, her people’s traditions handed down by her grandparents. When I would compliment her in some way, she’d say things like, “Don’t say that! The Indians believe it’s the action that shows, not the words.”

When she was teaching, whether it was adults or children or Native Americans or Milga’an, one witnessed her unique ability to stand outside of her culture, to reflect, unite, and explain. A paragon of humility, Frances used to say that anything – even “those things that crawl on the ground,” can be your teacher. From Frances I learned to listen.

Frances wouldn’t say so because she didn’t want to stand out, but she was a guiding light for many of her people through times of treacherous change and sorrow. The role she chose to play wasn’t easy: In a small, face-to-face community, she sometimes met resistance for her wide-ranging activities, particularly when she started to travel around the nation giving basket weaving and cultural presentations. In her small village, people were not supposed to stand out. But she wasn’t doing it for herself, she was doing it for the children. So she pioneered on, stronger for the struggle, a woman on a quiet mission.

Deborah Neff is a Cultural Anthropologist who had the incredible opportunity to know Frances Manuel for decades. She shared this because it is extraordinary to hear about the world through the eyes and life of a Native American woman.