by Madison Rush from San Diego, California in United States 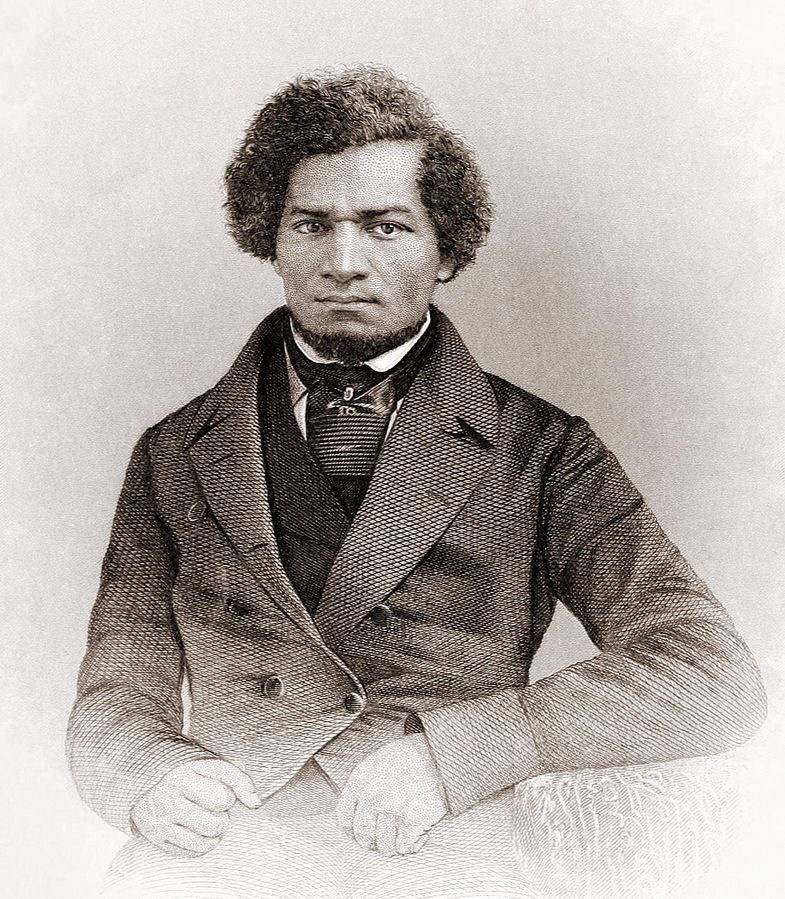 https://commons.wikimedia.orgEngraved by J.C. Buttre from a daguerretotype. [Public domain]There were approximately 488,070 free blacks that lived in the U.S. This was about 10% of the entire free population (Gates Jr.). Frederick Douglass was one of the few people in the U.S to become free, but it was not until later in his life. Frederick Douglass was born into slavery in 1818. A slave in that day did not know their exact date of birth, so Douglass claimed February 14, 1818, as his birthday (Notable Black American Men). Douglass’s unruly behavior caused him to have many different homes throughout his life. Some of those homes had kind masters, while others had terrible slave owners and made Douglass’s live horrible. He escaped slavery on September 3rd, 1838, and fled to Baltimore. He became an accomplished author and wrote three autobiographies about his experience with slavery. Douglass was also a person who made a huge difference in the Civil War. He did so much for the enslaved people up until his death in 1895. To be a hero you must be loyal and resilient. If a hero is not able to get back up after they fall down, they would not be able to help others. When a hero does not show loyalty to the people around them, they will not be able to do good. Frederick Douglass was extremely resilient and always loyal to the enslaved people, and because of this, he improved the lives of the enslaved and raised awareness for the abolitionist causes.

To become the man that Douglass was, he needed to be resilient. Frederick Douglass lived in many different places. One year “...Douglass was hired out...to a local farmer, Edward Covey, well known as a ‘Negro-Breaker’...Covey whipped Douglass almost weekly” (Notable Black American Men). Douglass had been treated like an animal every day of his life, but he never let that break him. He did not slip into a depression; Douglass decided to be resilient. Slaves could not become literate, but “[Douglass] used whatever resources were available to teach himself to read and write...In 1845, his first of three autobiographies, ‘Narrative of the Life of Frederick Douglass, an American Slave’ was published…” (Champ). Douglass used his resilience to learn how to read and write. He never let the hateful rules of slave owners stop him. Instead, Douglass used all that hate and made three autobiographies, something that seemed impossible for most slaves. Douglass had lots of obstacles, such as being whipped and not being allowed to read or write. He did not give up as soon as he was faced with these challenges. Instead, he overcame them. 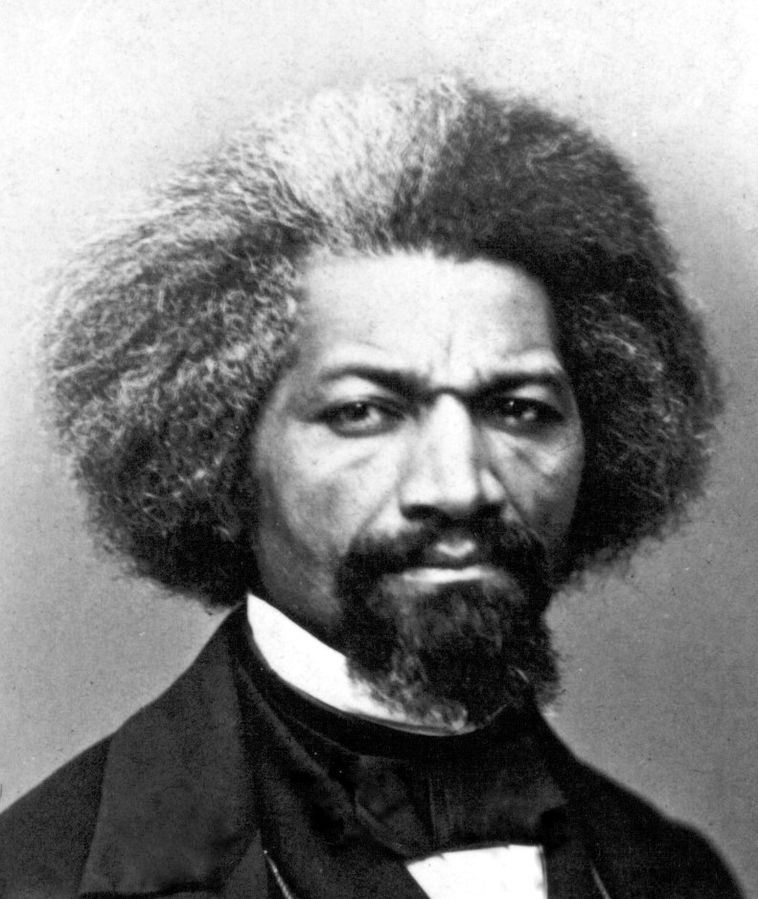 https://commons.wikimedia.orgnot listed [Public domain]Because of Douglass's loyalty, he was able to do so much good for those around him. One of the good deeds that Douglass did for his peers was “...[starting] the North Star. Primarily devoted to antislavery, it also espoused the causes of black education, woman suffrage, and temperance” (Historic World Leaders). Even after Douglass was out of slavery he was loyal to his people, and never forgot about those who were still enslaved. He made this newspaper to bring more awareness to anti-slavery and help the people that he was once like. Not only did Douglass show loyalty in his writing, but he “...also called on Lincoln to enlist black troops in the Union armies, feeling that African Americans should have a hand in their own liberation” (Notable Black American Men). When Douglass had the chance to help the slaves in their battle for independence, he took it. He wanted the slaves to be able to fight in the Civil War because he knew how important it was for the slaves to be a part of their journey to freedom. Douglass could have escaped slavery and never thought about the life he left behind, but instead, he decided to help the people who were just like him; he stayed loyal. 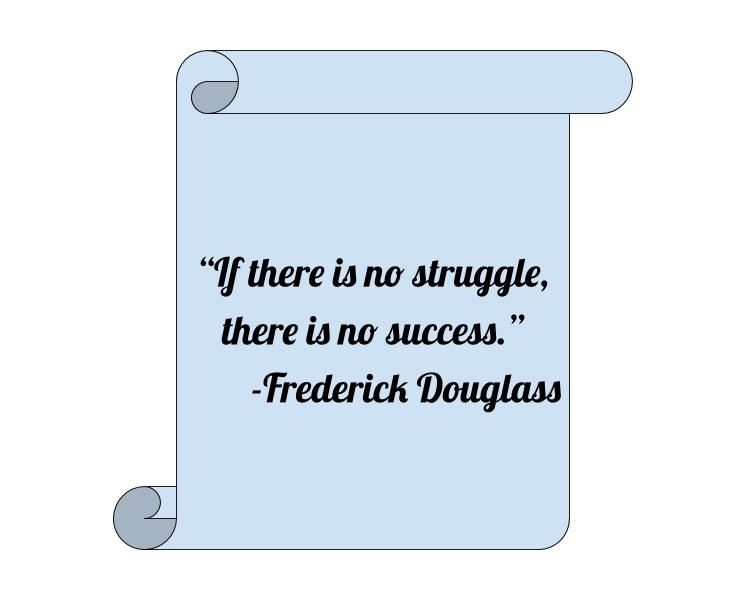 Frederick Douglass Inspiring QuotesMy creationIn conclusion, Douglass’s ability to conquer his challenges and remain loyal to the enslaved people of that time made Frederick Douglass a hero. He did not let Edward Covey break him, and did not let the rules of slavery stop him from getting an education. Instead, Douglass fought back against Covey and became literate. Frederick Douglass never let the people who were trapped in slavery be unrepresented. He wrote many speeches about anti-slavery and made a newspaper bringing awareness to them. Douglass also helped the slaves take part in the Civil War. He inspired me when he said, “If there is no struggle, there is no success” (Frederick Douglass Quotes). This quote inspires me because I struggle with things every day, and I always feel like nothing will get better. My struggles were not as harsh as Douglass’s, but that is not what matters. What matters is that Douglass gives people like me hope. Not only has Frederick Douglass helped the people who he was amongst, but he helps the people of today. His words and actions have lived on for centuries, and have changed the lives of many people. His loyalty, resilience, and his legacy are what makes Frederick Douglass a hero.