by courtesy of Freedom Boxes from Cambridge, UK

A humanitarian mission launched within 24 hours of the conflict breaking out in Ukraine is delivering thousands of boxes of essential items and collecting refugees at the Ukraine/Poland border to bring them to safety in the Czech Republic, Poland and Switzerland.

Freedom Boxes has been created by Stuart Watkins, who also owns a software company that has offices in Prague and Cambridge. When the conflict began, Stuart, his family, and his team set about to do something to deliver help and provide hope to those affected by the invasion. With Freedom Boxes, the team has created an immediate way to directly help those in need. 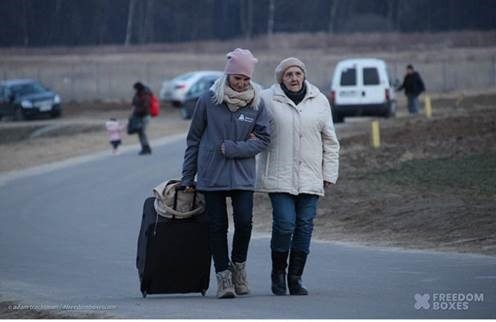 This elderly lady is Svitlana, she is 77-years-old and lived alone in Ukraine – she crossed the border on her own. Freedom Boxes got her a cab to take her to her daughter 1.5 hours away where she works in a supermarket and was unable to leave. Her daughter texted Freedom Boxes to say: “Thank you all so much for what you did for my mom and what you’re doing!!! I am incredibly grateful. May God bless you all.” She also called the team to confirm her mom made it to her safe and sound!

The team is made up of people from the UK and across the Central and Eastern European region, including Russia and Ukraine, who have pulled together to prepare, pack, and deliver Freedom Boxes.

The Freedom Boxes are delivered across the border directly to those in need – in bunkers and war zones - with the team’s drivers risking their lives on every trip.

Two of the four people working on the project in Ukraine are Stuart’s team members and they are helping deal with the coordination of getting people to the border and out of the areas under siege.

Stuart Watkins, founder of Freedom Boxes, said: “During war, it is always the vulnerable who suffer the most. We are dropping off truckloads of Freedom Boxes for distribution to those who need them and bringing Ukrainian refugees to safety.

“As a private company located in Prague and with colleagues in Ukraine, we had the ability to mobilize our assets, people, and connections very quickly to get up and running and begin helping. Larger organizations are less agile and take longer to mobilize, whereas Freedom Boxes provides a way for people to have a much more immediate and direct impact.

“In just two weeks since the war began, we have already delivered over 450 Freedom Boxes and transported over 70 refugees to safety. We will continue to do whatever we can to get essential items into Ukraine while getting as many people as we can out and away from danger.”

“As the humanitarian crisis worsens, bordering countries are filling up with refugees. They are having to travel further afar which can add days on to their journeys. The Freedom Buses are helping solve this problem.”

With their tech background, Stuart and his team have been able to quickly build solutions to utilize their assets for the greater good, with QR codes to help understand what people need and tracking devices to verify receipt of items.

Visit www.freedom-boxes.com to purchase a Freedom Bus ticket for someone fleeing Ukraine or choose from a range of Freedom Boxes tailor-made for families, children, and the heroes who have taken up arms to defend their country.

Children who want to let families and children who are victims of war in Ukraine know they are thinking about them are uploading messages of hope at www.messagesofhope.uk – the messages will be delivered directly to Ukrainian families via Freedom Boxes. Children everywhere are encouraged to upload their messages of hope. 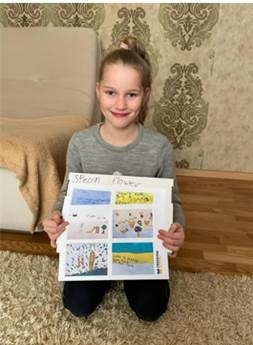 This is eight-year-old Sofiia, she lives in Zhytomyr, Ukraine – a village that has suffered numerous aerial attacks by Russia. Freedom Boxes contain messages of hope from other children.

Visit www.freedom-boxes.com to enable more deliveries and to bring more Ukrainians to safety

Freedom Boxes are a UK and Czech based software company and have been based in Central Europe for over two decades. Said Stuart, "Our company is formed of likeminded people from across the region including Russians and Ukrainians all of whom have pulled together to make this happen. It breaks our hearts to see the events unfolding in Ukraine. Along with our employees on the ground we have pulled together Freedom Boxes to deliver help and hope where it is most needed."