In the midst of a pandemic, what qualities do you want in a government health messenger? Someone who is gently reassuring? Authoritative yet kind? How about rock-star handsome, too?

APRIL 15, 2020 - AMMAN, JORDAN - Each day, Jordanians under coronavirus lockdown turn to one man to get the facts – and swoon. 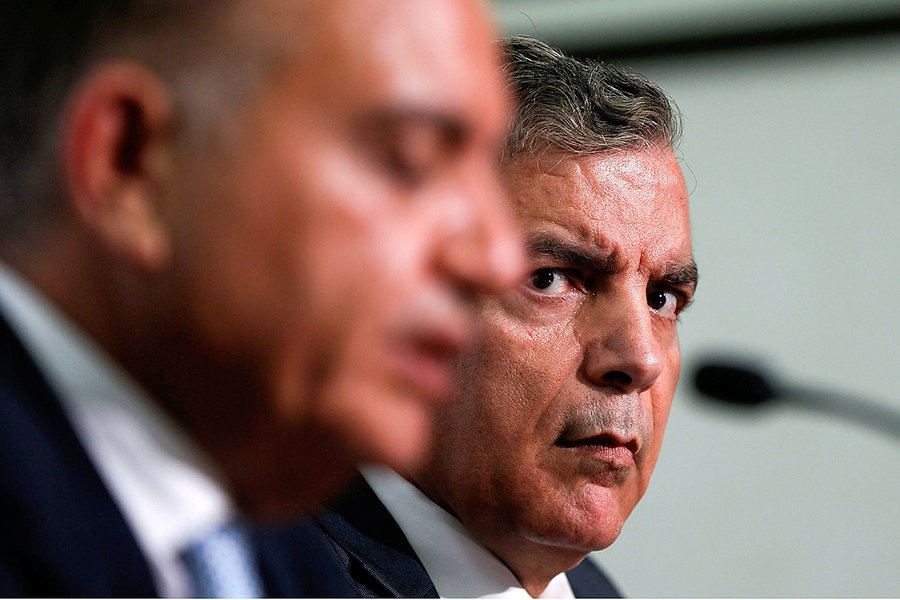 While Americans have Anthony Fauci, Jordanians have a “nation’s doctor” of their own: Health Minister Saad Jaber.

While Dr. Fauci is on bumper stickers and bobbleheads, this Jordanian physician is the subject of love ballads, poetry, and portraits.

Thrust onto the national stage amid the COVID-19 crisis less than 10 months into his tenure, the heart surgeon-turned-minister has become the face of the government’s response – a face many have found pleasing. Each night at 8 p.m. sharp, Dr. Jaber stands in front of TV cameras, his wavy graying hair coiffed to one side, and in the soothing velvety voice of a jazz DJ updates the nation on the latest coronavirus cases and government steps.

Using his gentle bedside manner, he kindly urges his fellow “brothers and sisters” and “my loves” to follow guidelines, telling them: “We can do this together.” Perhaps most shocking to Jordanians accustomed to stony-faced officials: He smiles. Often. He dons leather jackets, jeans, and polos more often than a suit. He is savvy at social media.

Within the first few days of lockdown, a new epidemic emerged in Jordan: Jaber-mania.

Even journalists and columnists routinely refer to him as “the handsome doctor,” and “Jordan’s George Clooney.” Others comb through his career in the army medical corps and in the operating theater for awe-inducing stories of inspiration.

But “Minister Clooney” is not winning over Jordan with a friendly smile and facts alone; Dr. Jaber has overseen Jordan’s early success in containing COVID-19, pushing for a near-total shutdown that is more than flattening the curve – it’s squashing it.

Jordan has seen a peak of 40 cases per day drop to zero to five new daily cases. There has been a total of 450 cases, 350 full recoveries, and eight deaths in a tiny kingdom where 90% of residents live on 5% of the land and every greeting comes with a kiss.

Dr. Jaber has earned a legion of fangirls. Mothers, grandmothers, professional women, and young girls across the country say they “melt” at his calm demeanor and smooth talk of social distancing and hand washing. Nor are men immune to his charms.

In WhatsApp groups and on Facebook, Jordanians share their latest music videos and memes of Dr. Jaber, almost always with floating cartoon hearts, heart-eyed smileys, and lines of poetry professing their – and a nation’s – love.

“There is a medical emergency: Your handsomeness is killing me!” writes one.

Then there are the songs. Jordanians have posted Bedouin love ballads reworded for Dr. Jaber, and even written songs and poems of their own.

“There is something hidden and dangerous, who will help us endure?” sings one Jordanian woman. “Saad Jaber!”

Jordan’s composer laureate, Omar Al-Abdallat, known for his chest-thumping nationalist songs about the king, army, and tribes, produced a toe-tapping ode to Dr. Jaber from self-isolation.

Dr. Jaber’s rock-star status is even more remarkable that it comes in Jordan, where citizens have low views of officials whose attempts to reach out to the public are seen as cringe-worthy or condescending.

Here government officials are tolerated, not beloved. But Dr. Jaber has broken the mold.

In a time of COVID-19 confusion and fear that has tasked Jordan’s military with patrolling the streets, his calm demeanor, fact-based briefings, and casual language have transformed the conversation in a panicked nation to a relaxed chat with a concerned uncle or a warm neighbor passing on sage advice.

But perhaps what is most refreshing is his honesty.

He admits he doesn’t have all the answers – and won’t pretend that he does. He even apologized on national TV for saying that the shemagh, the checkered Arab headscarf, could help protect against the virus if worn like a bandana.

“I don’t know and nobody knows how long this virus will last,” Dr. Jaber reminds interviewers, “but I know we can defeat this pandemic together.”

When hundreds of citizens violated the national curfew on the first day, he was direct, rather than angry: “Breaking the curfew won’t look so manly when your son gets sick and there is no hospital bed for him, or your mother has to lie in a hospital corridor like we see in the West.”

Pre-COVID, Dr. Jaber chafed at his ministerial post, preferring to be in the field, and one day back in the operating room, saving lives.

But his sudden celebrity status has had a real impact: His nightly briefings have become must-watch TV in Jordan.

Jaber fans discuss how the virus spreads, the proper way to wear a face mask and stay 2 meters apart, how young people can get sick or carry coronavirus or be asymptomatic. His visits to hospitals with patients and health care workers are viral sensations.

“If the minister cannot cure coronavrius,” asks one fan on Facebook, “can he cure my longing heart?”