by Kate Duffy from San Diego, California in United States

“The dramatic reveal was made at a school assembly, and though some teachers and students felt that their emotions had been betrayed, the story became a sensation” (Kraus). Rodriguez put an easy target for negative attention on her own back in order to prove how nasty teens can be. Gaby Rodriguez was born into a line of teen moms. She was placed under a stereotype based on her family's past and was determined to break it. She became sick and tired of teens tearing each other down and wanted to make an impact. “Determined to evade that future, and yet sick of the stereotypes applied to teen mothers… she would pretend to be pregnant… and secretly collect the gossip that swirled around her” (Kraus). By developing this plan, Rodriguez had to be brave enough to face her peers and their negative comments. A hero must be brave when looked down upon and inspire positivity even when most around them run off of knocking others down. Rodriguez is a hero because she was both brave enough to put herself out there as an easy target for negative attention, and yet inspire positivity. 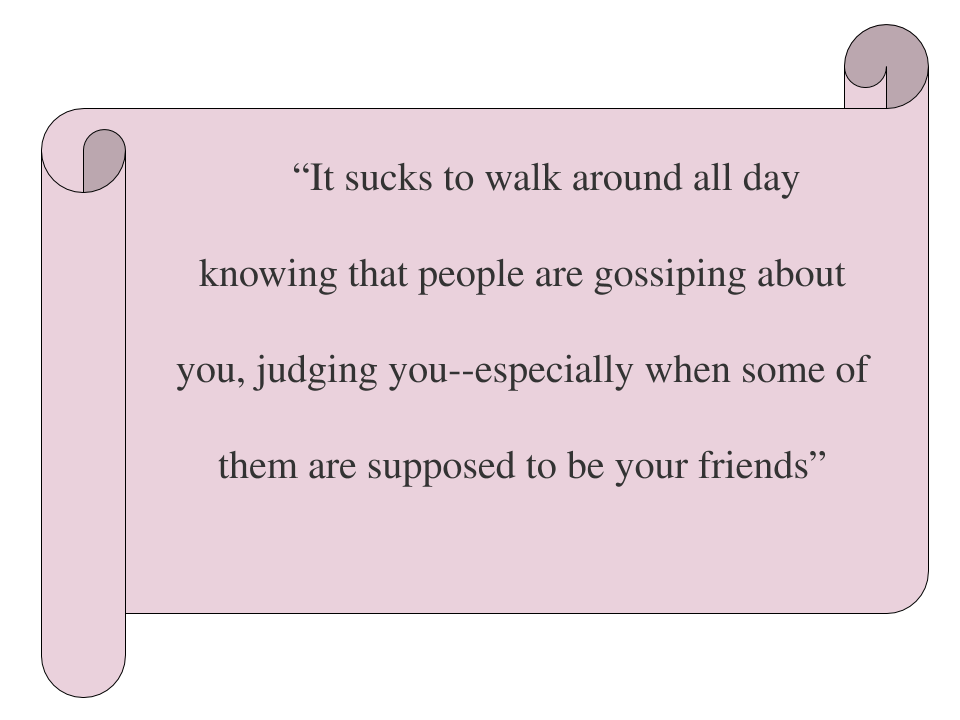 -Rodriguez(Rodriguez)Gossip, drama, and hateful words circle through high school, teens can be nasty. Rodriguez was brave to put herself out there as an easy target to hate on and gossip about. Teen pregnancy can be a sensitive topic. Some are ok with it and some may believe it's irrational, a bad idea, or even disgusting. Rodriguez’s pregnancy triggered positive and negative opinions from peers. The news traveled around the school quickly through gossip. “It sucks to walk around all day knowing that people are gossiping about you, judging you--especially when some of them are supposed to be your friends” (Rodriguez). By performing this experiment, Rodriguez had to have a lot of bravery to face others' opinions. She voluntarily put herself through criticism of peers which takes a lot of guts. Friends who didn't support the situation may have turned their backs on her. Her peers were public about their opinions on her pregnancy and Rodriguez had to be strong to not let it get to her. Having so much negative attention on you is hard. Rodriguez became the gossip of the school when she announced her pregnancy. “I wanted to hide. It was exhausting to feel like people were judging me all day. I went home and cried and wished I’d never started this project” (Rodriguez 131). Though Rodriguez persevered through the experience, she still felt the pain of being judged and criticized. She put up a brave face and kept the act up even though it was hurting her. She was brave to work through the feeling of being looked at differently by her peers. Teens can be extremely negative and Rodriguez gave them an easy thing to gossip about and hate on. She had to be brave to face her peers who didn't agree with or accept her pregnancy. 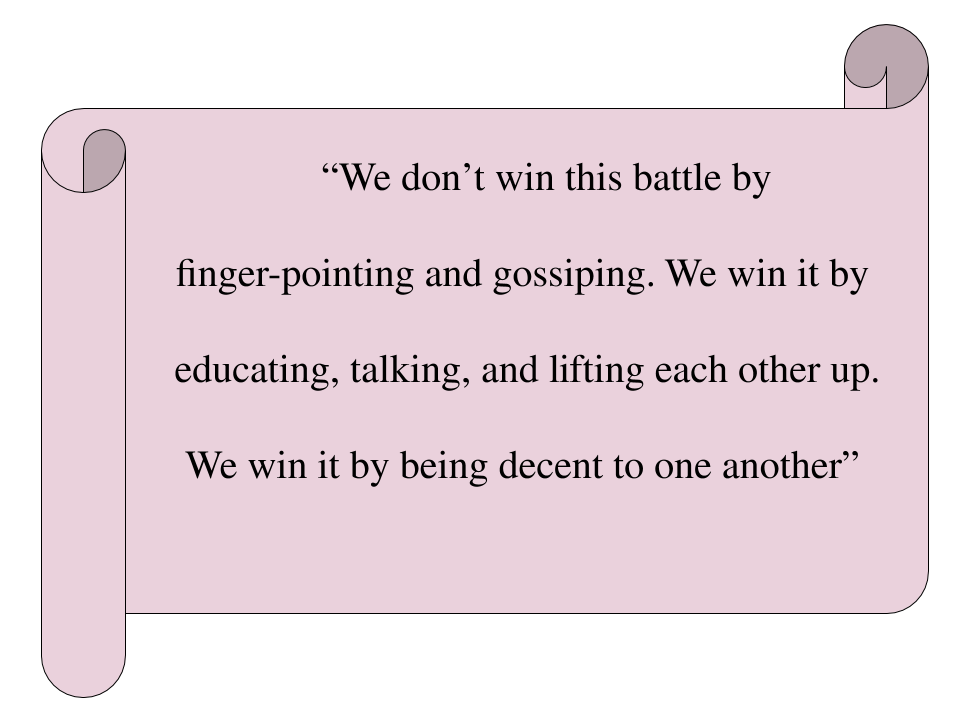 -Rodriguez(Rodriguez 127)A hero must inspire positivity to others. Rodriguez inspired her peers and audience to have a positive outlook on others and a positive attitude. Rodriguez analyzed how teens are quick to judge and gossip about others.“We don’t win this battle by finger-pointing and gossiping. We win it by educating, talking, and lifting each other up. We win it by being decent to one another” (Rodriguez 127). Rodriguez believed the key to adolescence is lifting each other up. She expresses her opinion of how it's ridiculous that, instead of rising above the hate together, we create more by knocking each other down at every opportunity we get. Rodriguez was sick and tired of how people were being placed under stereotypes based on their or their family's past. She believed people needed to break out of their stereotypes and live life the way they deserve. “You can’t live your life under a stereotype… you have to live your life and make it a good life because you only have one” (Rodriguez 158). Rodriguez expresses her outlook on life that even when others criticize and put you down for it, you have to make the most out of the time you have and be yourself. Don’t let other people placing you under stereotypes change your future. “I hope we can change this society so that, instead of teens working hard to tear each other down and laughing about it in the school hallways, we can learn to support each other and help each other move forward when there are troubles along the way” (Rodriguez 215). Rodriguez wants others to understand the impact teens have on each other. They tear each other down making fun of them for things whether they can control it or not. If they used all of the energy they put into tearing others down into lifting others up and helping people through these rough times, the world could be so much more positive. Think about teen depression, bullying, suicide, all sensitive topics no teen should have to deal with.  Everyone has insecurities and vulnerable topics other teens target, but do they think about the impact it would make on them if someone pointed out one of there sensitive topics? Rodriguez put out the inspiring message to help others and respect yourself. Don’t let negative people shape your future or outlook on life.

Rodriguez was brave to put herself out there and inspire positivity throughout her journey. Rodriguez's goal with faking her teen pregnancy was to prove how people place each other under stereotypes based on their or their family's past. She showed how teens can be nasty when gossiping about others. Rodriguez encourages them to put that energy into lifting others up, not knocking them down. Before placing someone under a stereotype and judging them, think about if you were in their shoes and how you would feel if someone was judging you like that. She was strong through all of the negativity and put up a brave face. She knew her self worth and didn't let others affect her. She didn't worry about what others thought of her because she had a positive outlook on the situation and just wanted people to follow in her footsteps and help and respect others rather than knock them down. Rodriguez inspires me because she didn't worry about what others think of her. She was always positive and sent the message of how teens should lift each other up instead of knocking them down. I would have to admit I get caught up in what others think or say about me. I also know I need to have a more positive outlook on life and be less quick to judge others. Rodriguez has inspired me to not judge others by first glance. She has also inspired me to do what I want, not what others expect me to do. By hearing her story I have been inspired to not care what others think of me. Everyone is special in their own unique way. If people would put all of the energy they put into gossiping, jealousy and negativity, into helping, encouraging and lifting others up, our world could be such a more positive place. Everyone has the power to make a difference. One compliment. One attempt at inclusion. One smile could make someone's day that much brighter.