by Tyler Daynes from San Diego, California in United States 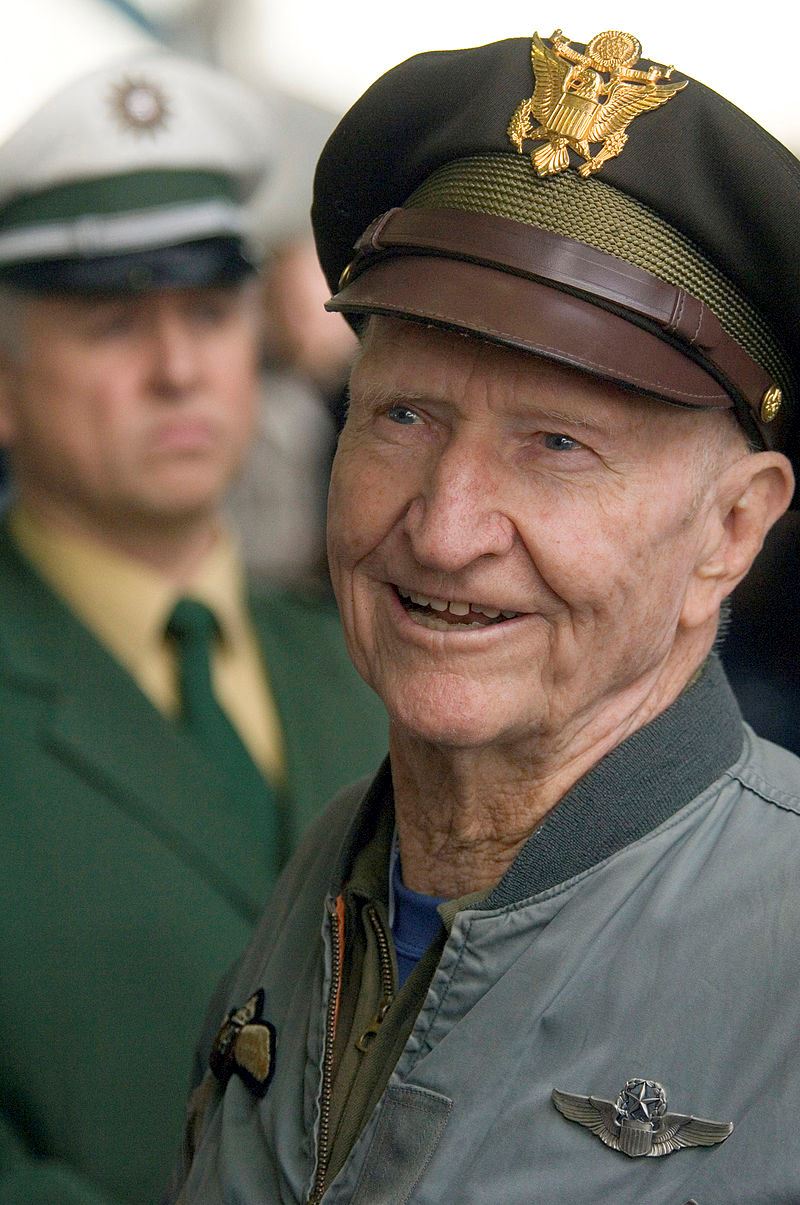 Retired U.S. Air Force Lt. Col. Gail Halvorsen, the famed "Candy Bomber" of the Berlin Airlift fields questions from reporters at the closing of Rhein-Main Air Base, Germany.MSgt John E. Lasky ( This image or file is a work of a U.S. Air Force Airman or employee, taken or made as part of that person's official duties. As a work of the U.S. federal government, the image or file is in the public domain in the United States.)The world needs heroes to look up to. We consider those with superhuman abilities to be the level of heroism that is needed to be considered a hero and yet we fail to see the day to day heroism of people just like us. People who just wanted to do the right thing even though it might be hard to sometimes. These type of people are what our society is founded on. People like, say, Gail Halvorsen. He was an average Joe trying his best to serve his country, when he saw an opportunity to do something extraordinary. While serving during World War 2 he supply dropped many areas of the destroyed city of Berlin. When making one of his stops he noticed about 12 kids behind a battered fence. They told Mr. Halvorsen not to give up on them and try his best to help their failing country. He wanted to give something to these kids, so he reached in his pocket and pulled out two sticks of gum and gave it to the children. They didn’t fight and instead divided it and those that didn’t get any gum where allowed to smell the aroma of the package. It was at this moment he realized what he needed to do. He went back his supply base at the time and asked for his fellow pilots to give him their chocolate. When he had all the chocolate he needed he made parachutes to put on the chocolate. The following morning the kids met at that fence and saw his plane fly in toward Berlin, but he missed the landing pad. He flew his plane directly over the fence and dropped 30 chocolate bars to the kids below, giving the kids one of the few sweets they had ever had. Through his acts of kindness and determination he found ways to spread his hope and cheer in new ways. Gail Halvorsen was one of the most kind and selfless persons in the history of our nation and because of his kindness the starving kids in Berlin, and we today, have something to hope for.

Gail was determined to help us even if he was putting his livelihood on the line. Back in the 30’s he could have been fired for what he did and being out of a job after a war would mean terrible things for him. Gail said “Shake your hand and say, 'Thank you, for freedom!' I've been back 35 times in all, three times in 2009”(CANDY BOMBER' DELIVERED).  This shows how much he wanted to help people in Berlin. Even after he was done in the air force he was still able to send chocolate from the sky to help feed the hungry. Gail had been flying for over seventy years and was still able to drop candy. Later on in “DELIVERED CHOCOLATE, HOPE TO BERLIN" the author said that, “This was just what the military sought. By framing this story as an act of heroism benefitting innocent children, Americans overcame residual hostilities of the occupation and fostered a new relationship with the former enemy,” she writes”(:Eschner). When Gail was threatened by his superiors to stop he kept on pushing the envelope until they eventually allowed him to continue with the project. Even when they threatened to fire him, he continued dropping the candy for the poor children of Berlin. This man careed more about those children then he did about himself.

After that his kindness helped kids during the war to have hope and try to make the best of their terrible situation. Gale was on record to say that ”Operation Little Vittles dropped more than 21 tons of candy during the airlift”(CANDY BOMBER' DELIVERED). No one asked him to do this. No one asked him to risk his livelihood for these kids. He did this for them - all the kids who didn’t have anything left. In his eyes they needed hope more than anyone. "The small things you do turn into great things," he said”(:Eschner). He takes what he says to heart when trying to help these kids. Without his remarkable kindness,  most of the kids would have given up hope a long time ago. Because of him we have something to believe in too.

Gail Halvorsen was a man devoted to the job of bringing hope to people who needed it the most and to help them pass through one of the most traumatic events in history. His kindness helped people go through some of the hardest hardships in history and his determination to his cause ended up giving the children of Berlin something special. Hope. I believe that Gail was a hero because he displays a sort of determination and kindness that is only found in some great leaders. People to this day still gain hope from that faithful event that happened that long ago. Yet he is all but forgotten from history. When I hear of amazing heroes, I hear childhood idols like Taylor Swift and Oprah Winfrey, who aren't bad people, but just don't hold a candle next to Gail. Being a hero doesn’t mean you are beloved by everyone and having tons of fame. Being a hero is when you put someone else in front of your own needs. A simple act of kindness could end up changing the course of history. In Gail’s case, two sticks of gum and a couple chocolate bars stopped World War 3. That is a hero.

lds.org - His life religiously.
www.stmuhistorymedia.org - The in depth description of life during the war and his affect on it.
abcnews.go.com - His life after his experiences and now.