As Rome was burning due to the hand of Nero, he sat in his palace fiddling. He killed his wives, and if someone didn't like him, they wouldn't be around for too long. Nero doesn't sound like a good man, does he? He belonged in jail, and he was due to one good man named Gaius Musonius Rufus, a Roman philosopher that lived during the reign of Nero. He was a philosopher who taught many people his ideas, including one famous philosopher, Epicurus. During Nero's reign, teaching philosophy was illegal due to it exposing Nero. Gaius was exiled many times but kept on returning for the better. He widespread exposed Nero because he had killed his own wives. He killed or exiled people unfairly if they did not like him. When Rome burned, it was Nero who started to clear out space for his new palace. No one knew that until he got the word out. Nero started getting unpopular, with many more people going against him. Along with helping liberate Rome of Nero, Gaius believed in equality--they have found his speeches about women having a place in the ancient world. He believed they could become warriors, they could become leaders or philosophers. He also had written a speech called “Should daughters receive the same education as sons?” In this poem, he stated his opinion that daughters should receive the same education as sons. He was rightfully nicknamed the “Roman Socrates” because he was one of the best Roman philosophers to live. 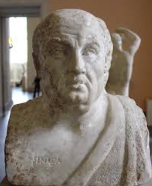