MAY 5, 2020 - Scared for friends who had contracted the new coronavirus and worried about her daughter's schooling and husband's work, Whitney Rutz cried and screamed into her pillow. 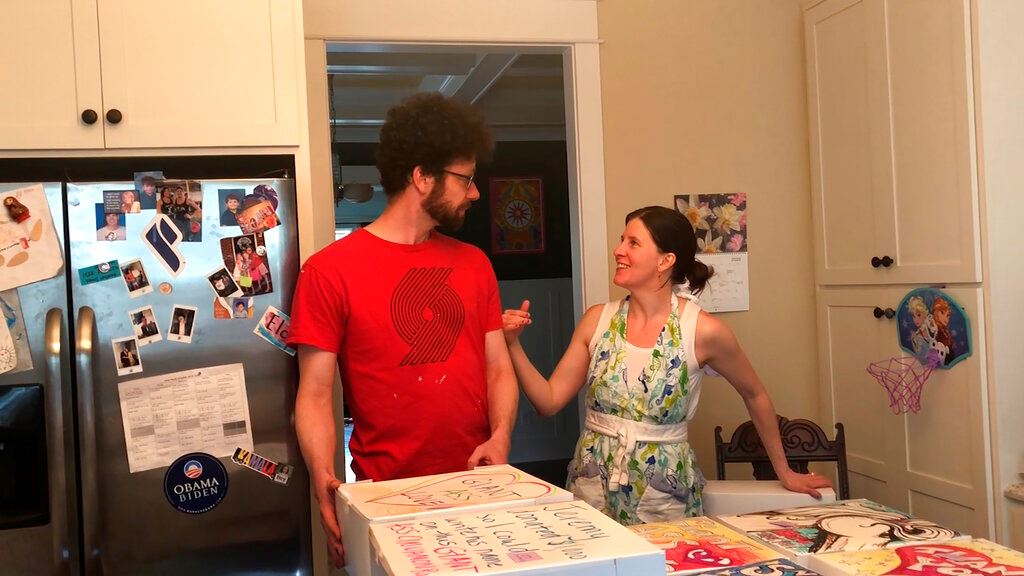 In this April 26, 2020, image from video provided by Whitney Rutz, Whitney Rutz, right, and husband, Paul, stand near several decorated boxes to hold large cinnamon rolls in their home in Portland, Ore. The Rutz family has helped raise thousands of dollars for Oregon Food Bank.Whitney Rutz via AP

What began as an effort to cheer herself up ended up lifting the spirits of many others, raising money for thousands of meals and nourishing "the bellies and souls" of heath care workers — one giant cinnamon roll at a time.

Rutz's rolls have raised more than $35,000 for the Oregon Food Bank, enough for more than 105,000 meals. At first, she was auctioning the rolls off — the first went for $300. Now, Rutz, with some help, bakes a giant roll—12 inches across and weighing more than five pounds—for every $500 raised. The highest contributor of the day decides where the roll goes. 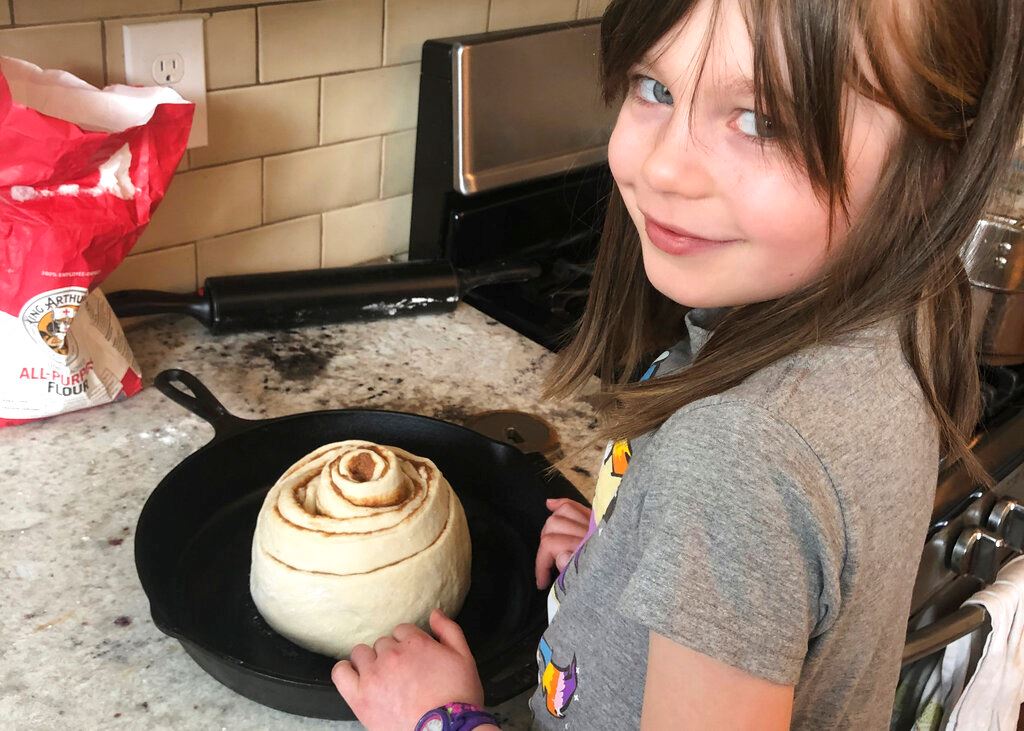 Since a friend asked for her roll to be donated to health care workers instead of delivered to her, the vast majority have gone to hospitals and health or assisted-living facilities.

"If I didn't have this to focus on ... I don't know the state I would be in right now emotionally," Rutz said on a recent weekend when she woke up before 6 a.m. and spent most of her day in the kitchen kneading, slicing and rolling dough and spreading the filling.

Once the operation grew, the food bank set up a fundraising page for the donations. Oregon Food Bank CEO Susannah Morgan said the rolls bring something to the table besides food: joy

"We're all scared and hunkered down and worried about our health and the health of our loved ones and some of us have lost our jobs and hunger is spiking through the roof," she said. "Trying to tackle this sort of massive, enormous situation by baking giant cinnamon rolls just makes you smile."
Others have been inspired to roll up their sleeves, too. 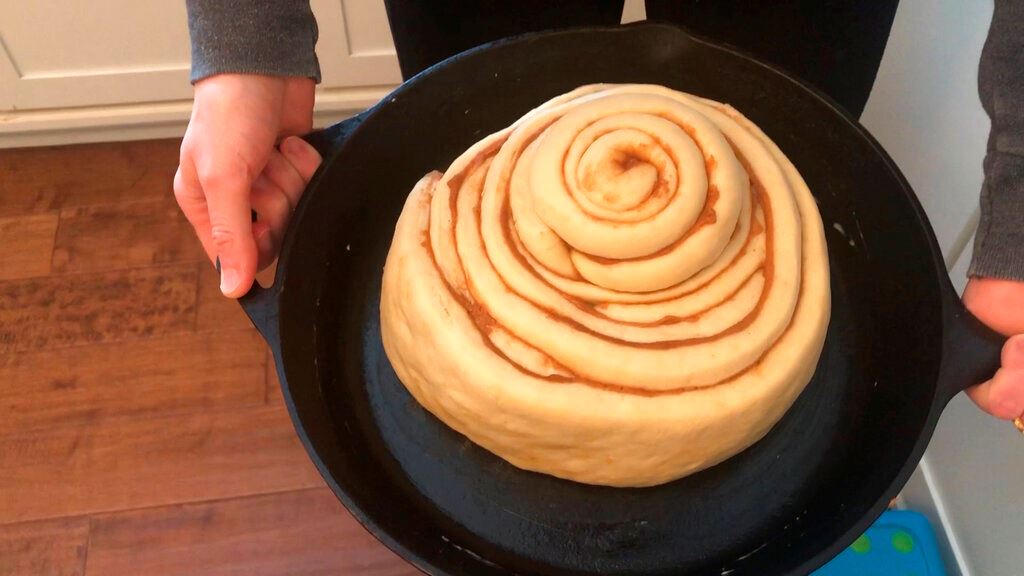 In this April 11, 2020 image from video provided by Whitney Rutz, Whitney Rutz displays a large cinnamon roll before putting it in the oven in her home in Portland, Ore. Rutz baked cinnamon rolls to help raise funds for Oregon Food Bank.Whitney Rutz via AP

As the number of donations increased, Rutz's twin sister and a friend of hers started baking rolls for the fundraiser in their own kitchens. An acquaintance — a mother of three whose husband lost his job in the midst of the pandemic — donated money and launched her own fundraiser in North Carolina. Rutz's husband, a painter, decorated some of the rolls' boxes, a job that initially was their daughter's. Artists and local celebrities have stepped in to help. One performer has been bedecking the boxes with colorful drawings and helping with deliveries.

"So many people are getting really creative," she said. "There's many ways that you can contribute and you don't have to be on the front lines."
Enriquez took two rolls to emergency room nurses to surprise them after a particularly rough shift. 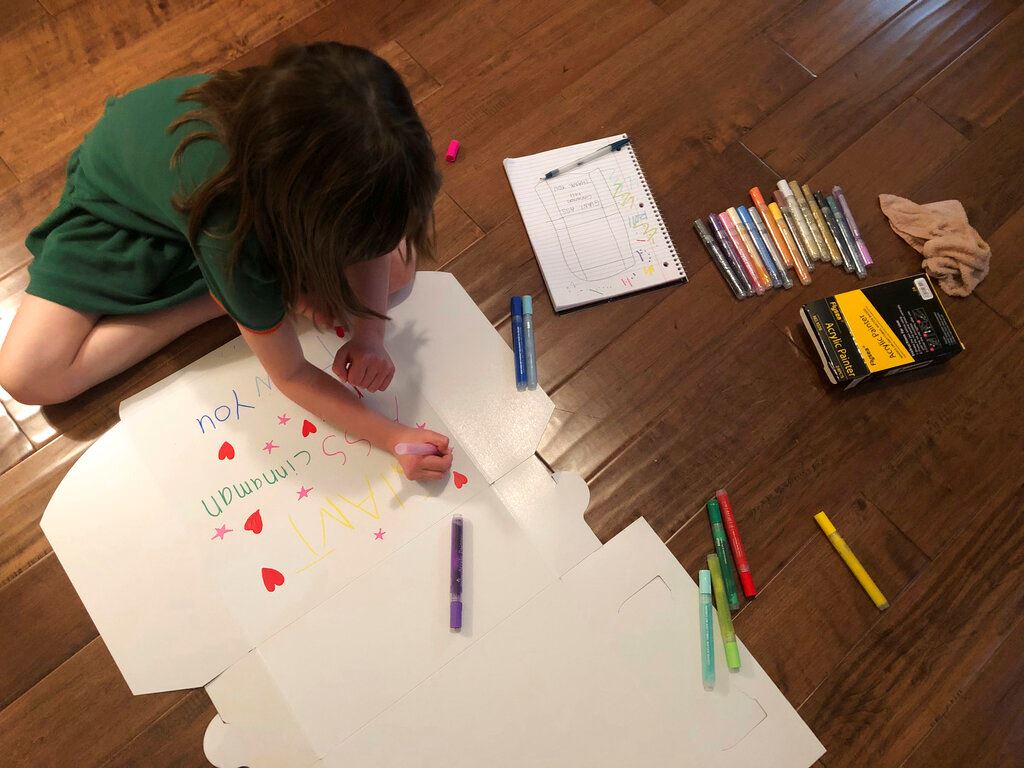 In this April 10, 2020, photo provided by Whitney Rutz, Elsa Rutz decorates a box that will hold a large cinnamon roll in Portland, Ore.. Elsa's mother, Whitney, has raised thousands of dollars for Oregon Food Bank.Whitney Rutz via AP

"It just made their day. They cried," she said. Her voice cracked with emotion. "I think that they felt, like, really moved and that people are still out there cheering them on."
___
While nonstop global news about the effects of the coronavirus have become commonplace, so, too, are the stories about the kindness of strangers and individuals who have sacrificed for others. "One Good Thing" is an AP continuing series reflecting these acts of kindness.
___
Associated Press religion coverage receives support from the Lilly Endowment through the Religion News Foundation. The AP is solely responsible for this content.