A human must turn information into intelligence or knowledge. We've tended to forget that no computer will ever ask a new question.

One of the 20th century's brilliant visionaries of computers and applications came to the field late in life.

As a 37 year old and holder of a mathematics doctorate from Yale, Hopper reported to active Navy duty on July 1944. Little did she know that she was stepping into computer history. Hopper was ordered to report to the legendary Howard Aiken who headed the Navy's Bureau of Ships Computation Project at Harvard. This was to be her first introduction to computers, mainly the Mark 1 computer. The Mark 1 was the first sequentially programmed computer and it was Hopper's job to write the manual for it. This demanding task would yield a 500 page manual.

After World War II when most were returning to civilian life, Hopper's desire was to stay in the Navy. However. she was denied a transfer from the Naval reserve to regular Navy duty because she was two years past the age deadline. Hopper would spend the following years as one of the few women teaching Mathematics at the college level, mainly at Vassar and Barnard. Hopper would return to active duty on August of 1967 at the request of the Navy. Her return would find her leading the Navy's Naval Data Automation Command. Ironically, Hopper retired from the Navy as its oldest personnel-the Navy's only tireless and vibrant 74 year old!

Hopper had been interested in mathematics from an early age and her parents would find the young girl dismantling clocks to discover their inner workings. This curiosity would later serve her well with computer programming languages and their structural components.

One of Hopper's beliefs was that computers were as applicable to business as they were to science. To this end Hopper took a position at Eckert-Mauchly Computer Corporation. It was considered a risky career move from the Navy to the world of business for Hopper. It was at Eckert-Mauchly that Hopper would work on the UNIVAC 1-the first large scale electronic computer. Perhaps one of the greatest of Hopper's contributions to computer science was her belief that computer programs could be written in English. Hopper developed a computer program called a compile. A compiler was software that could translate a whole set of programmer's instructions into binary language. Another Hopper invention was the Flow-Matic program. Compliers and the Flow-Matic greatly influenced the development of the computer language COBOL. It is now commonly believed that without Hopper's contribution COBOL would not have developed as it did, and computer language applications to the world of business would have not as evolved as elegantly. One of Hopper's more curious contributions to the computer was the moniker "bug". During work on the Mark II computer, Hopper became aware that the machine was yielding erroneous results. On examining the inner workings of the computer a moth was found, dead, near a relay. The moniker "bug" and "debugging" stuck from that day forward-it was to be a bit of trivia that Hopper preferred to live down. Hopper, a true visionary, had a clock in her office that ran counter-clockwise. She used the clock to prove the point that there are many ways to conceptualize solutions to problems. It is not surprising that during her brilliant career Hopper would encounter a great tide of cynicism about the value of her compilers, and male chauvinism to a woman's participation in the field of computer science. Hopper was a great believer in raising the standards of the computer industry and the quality of information that computers were destined to handle. When Grace Hopper was asked about the computer and its relationship to information and knowledge she remarked, "A human must turn information into intelligence or knowledge. We've tended to forget that no computer will ever ask a new question."

A tireless and inspirational speaker, Hopper was promoted to the rank of Rear Admiral in November of 1985. When she retired, Rear Admiral Hopper was one of the last of the World War II participants to leave active duty. She died in her sleep on January 1, 1992. She was buried at Arlington Cemetery with full honors. Grace Hopper was an inspiration to women everywhere, for she persevered and succeeded in a field in which few women had dared to enter at the time. The field of computer science owes a great debt to the one of the Navy's most fascinating and visionary individuals. 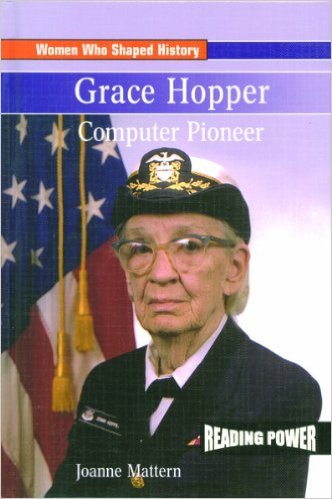 Ada Byron Lovelace: The Lady and the Computer

Ada, the Enchantress of Numbers: A Selection from the Letters of Lord Byron''s Daughter and Her Description of the First Computer