The expansion of “granny flats” can produce a political test of clashing values. More apartments can mean lower housing costs – but also a denser population, and neighborhood change.

AUGUST 19, 2019 - ROCKVILLE, MD. - Wearing a homemade shirt that spelled out – in black-and-red felt letters – her opposition to a Montgomery County zoning code amendment, Aleks Rohde parsed her fears. She doesn’t hate “granny flats,” she said. She just dislikes what they could bring to her neighborhood: density. 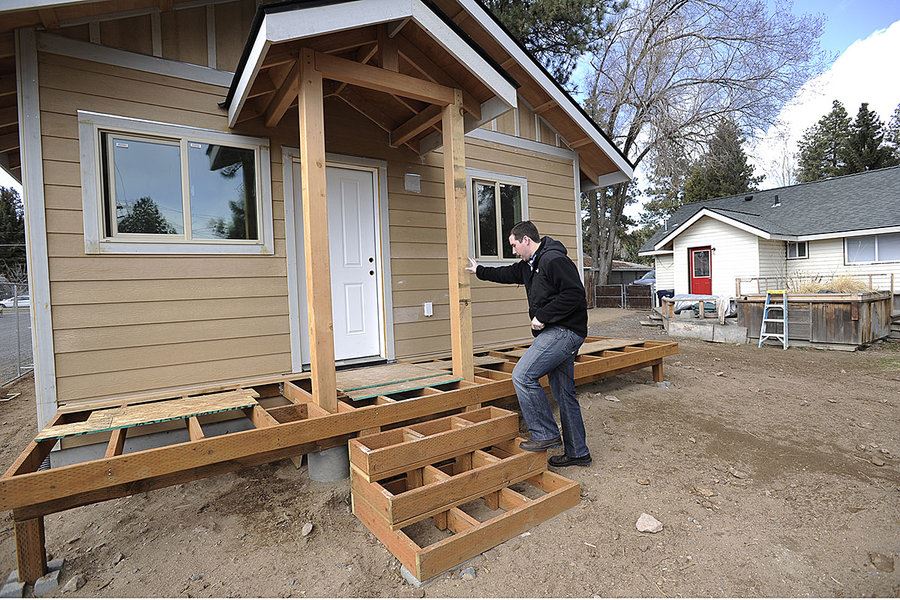 Ryan Davies walks into his accessory dwelling unit, also known as a “granny flat,” behind his home in Bend, Oregon, on March 21, 2013. More communities are loosening zoning rules as a way to increase affordable housing.Ryan Brennecke/The Bulletin/AP/File“The denser the neighborhood, the more the problems,” said the retired Army lawyer. “Like that study with rats, where [behavioral scientist John Calhoun] packed them in a more crowded space and they started attacking each other. It’s human nature.”

Ms. Rohde was one of two dozen protesters who showed up at the Montgomery County Council’s July 23 meeting to oppose a proposal to relax restrictions on accessory dwelling units (ADUs), basement or garage spaces also known as granny flats or “in-law apartments.”

Expansion of ADUs to accommodate housing demand has proved to be a controversial issue across the United States. Notably that’s been the case in recent months here in Maryland’s Montgomery County, a prosperous and reliably Democratic suburban enclave of Washington.

Earlier this summer, a local elected official sparked outrage by saying ADUs would turn Montgomery County “into a slum.” The protesters at the July council meeting, mainly retirees, disavowed this statement. But they do genuinely see ADUs as a harbinger of unwanted change for Montgomery neighborhoods.

But longtime residents resist imagining suburbia as something other than a haven of single-family homes. Montgomery’s fight over granny flats was really a proxy war for opposition to the county’s population “overcrowding” and diversification, says Sam Nasios, an auto repair shop owner who opposed the amendment.

People buy homes in leafy areas such as Montgomery County to get a little peace and quiet, some separation from the craziness that otherwise surrounds them, says Mr. Nasios. Increasing density takes that away.

“It’s just that feeling: You drive into your neighborhood, and all of a sudden you can’t get through your street and there’s people everywhere,” he says.

Communities across the country are wrestling with similar problems as cities’ rising costs push more and more people into the surrounding suburbs.

Civic leaders and housing experts promote suburban densification as a way to address the nationwide housing crisis and suburban sprawl that helps drive climate change. But retrofitting these communities presents many financial, political, and technical challenges like bulking up schools or adding sewer lines.

Perhaps the trickiest problem is cultural and racial: integrating new neighbors – often people with lower incomes and different skin colors – into prosperous areas where white people have been predominant.

“There is a social contract in neighborhoods that you will treat one another with respect and try to do unto others as they do unto you. Be the neighbor that you want to live next to,” says Councilman Hans Riemer, who introduced the zoning amendment. “But that means different things to different people, and I think that perhaps that’s part of the challenge.”

Licensed ADUs remain a small portion of U.S. housing. But some cities and towns have found that easing the licensing process leads to a big increase in granny flat numbers.

After Portland, Oregon, loosened rules in 2009, annual ADU applications jumped tenfold, to over 600 in 2016. Santa Cruz, California, and Seattle experienced comparable increases. Los Angeles used to prohibit most ADU conversions, but in 2017 California passed a law overriding such local restrictions. Applications skyrocketed, and in 2017 LA issued over 4,000 ADU permits.

Not all ADU campaigns are successful, though. Last fall the Reno, Nevada, City Council rejected a granny flat proposal, after a wealthy historic neighborhood organized opposition.

For Montgomery County, the backdrop to the ADU conversation is its transformation from a quiet, tony, very white suburban swath into one of the country’s most diverse and bustling counties, fueled especially by a Hispanic population that has tripled over the past 30 years.

The county has remained relatively wealthy, with a median income currently hovering around $100,000. However, that statistic masks the racial and ethnic disparities. Black and Hispanic homeowners are more likely to have incomes below $50,000 than above $100,000. At that income level, finding affordable housing becomes much more difficult, particularly when average home values in the county are over $450,000.

Mr. Riemer says this reality is why he pushed for the zoning amendment.

“[ADUs] add housing in the supply and that’s helpful, but more importantly it’s a more affordable way to live in a more expensive location,” he says.

For Nuri Funes, the steep costs have pushed many of her friends out of the county.

“I feel sad because they have been in this community, in this church, and they want to stay here; they like the schools for their kids,” says Ms. Funes, a licensed child care provider originally from El Salvador. “I think about my kids: They’re young adults and they’re not going to be able to buy anything because prices are rising so much.”

She says families will often double or triple up in one house just to get by. When she first moved to Montgomery County 26 years ago, she and her husband moved in with her mother and helped pay off the mortgage. Then, when they bought their own house down the street, they rented out their basement to her sister-in-law and her husband. Ms. Funes says it’s common in her culture.

“Our culture is different,” she says. “You will never see [me] place my mother in a nursing home. I will keep her until she dies. So that adds an extra person to my family. We help each other, and maybe that’s why you see the difference in how many people live in a house.”

What Ms. Funes calls culture, some others call overcrowding.

“I’m not saying this to single out the Hispanic community, I just think that because it is the most growing population, they tend to be the bigger offenders of having too many cars parked in the grass, having multiple families living in single-family homes and things like that,” says Mr. Nasios, who immigrated from Greece nearly 40 years ago.

He freely admits that the neighborhood civic association has not done the best job reaching out to the Hispanic community and wants to work to improve that. “I feel that [the Hispanic community] is not at the table when all this stuff is happening,” he says. “You cannot provide solutions unless everybody involved is [at] the table.”

He also insists his opposition stems from a genuine concern – rather than a racial bias – over how overcrowding has affected his neighborhood, particularly the excess of cars. His neighborhood of Aspen Hill has struggled to keep pedestrians safe, most notably when four teenagers were hit and injured last year, with one person sustaining brain damage.

Mr. Nasios isn’t alone in worrying about this. Overcrowding is a legitimate issue, says Mr. Riemer, and some neighborhoods bear the burden more than others.

“It is a reality that families are making it work living here by crowding into single-family housing. Turns out that people are mostly living within the law when you go to inspect,” he says. “But that is just what happens when you don’t build enough housing and a lot of your housing is set aside for single-family use.”

Similarly, Ms. Funes dislikes that cars clog up her streets and endanger her children. She recognizes she is part of the problem – all five people living in her house own cars – but what is she supposed to do when cars are necessary for jobs and life?

“If we don’t want people to travel further in their cars, then we need to have people living near things, which means more people in places that are already what many people consider to be built out,” says Alex Baca, housing program organizer for the nonprofit Greater Greater Washington.

Such a scenario troubles Ms. Rohde, the protester, who says the additional density added by ADUs will lower property values. However, there is no data to corroborate her fears, and Mr. Riemer expects a modest increase from the roughly 40 ADU permits the county gets every year.

“ADUs are tiny, a drop in the bucket,” says Ms. Baca. “This is not revolutionary by any stretch, but it does start to get at [the fact] that the form of our neighborhood is not going to work super well going forward.”

Many housing experts are raising the alarm that the suburbs are 20th-century relics and poorly equipped to handle modern challenges like climate change or the housing crisis. Transforming our society requires sacrifices, says Ms. Baca, but Montgomery County is already better prepared than most places. It has the wealth to bankroll the transformation, a progressive county council that backs it, and substantial community buy-in. Mr. Riemer says the “dozens upon dozens” of emails he received in support of the zoning amendment drowned out the opposition.

All Ms. Funes wants is a place where her friends don’t have to leave and her children can afford to stay. She’s optimistic about the county’s future.

“You see all the buildings and the new recreation center, the library, and it’s like, yeah! You feel more proud, you want to live here, stay here – your grandchildren to be here. I’m happy that more people want to come and live here. That’s good, right? If other people want to come to this community, then there’s something good here.”