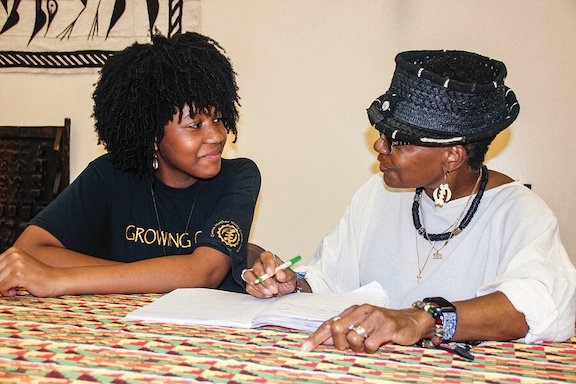 ​One by one, children pop into the Zoom room, tuning in from desks, couches, and bedroom floors across three states. It’s Saturday morning, and these fourth-through-eighth graders are welcomed with wide-open arms.

“Who’s that beautiful girl in the corner?” asks one of the group’s elders, prompting a shy grin from the girl in the flowered shirt. “I used to wear my hair just like that in plaits!”

The mentors running the show are elders from the Griots’ Circle of Maryland, an affiliate of the National Association of Black Storytellers. Rooted in the African oral tradition, these storytellers command a powerful presence, even on Zoom.

Once all the video cameras have been coaxed on, “instructor-mentor” Deborah Pierce-Fakunle leads everyone in a chant:

Heads nod along in support.

Baltimore’s Growing Griots Literacy Learning Program began in 2007. The organizing griots (pronounced “gree-ohs” and named after the traditional West African oral history tellers) had lived through the hopes – and disappointments – of the civil rights movement. And they were becoming increasingly frustrated with the education Black students were receiving in the United States.

“Our kids were in a learning environment where many of them were leaving school functionally illiterate,” says co-director S. Bunjo Butler. Worse, he says, schools weren’t giving Black children an accurate or complete picture of themselves, their history, or their potential.

Recent statistics indicate schools have yet to bridge educational divides. A 2019 assessment of America’s public schools shows only 15% of Black eighth graders scored “proficient” or higher in reading, according to the National Assessment of Educational Progress. The same was true for 42% of white eighth graders.

The Growing Griots program aims to fill in the gaps. By immersing children in the art of storytelling and offering robust conversations about Black history, it offers students a deeper understanding of themselves while building skills they need to succeed.

As the program helps young people appreciate their roots, it creates an intergenerational dialogue of mutual respect.

“For the older adults, they know that they’re sharing and passing on a very rich oral tradition and art form as well as their stories,” says Donna Butts, executive director of the nonprofit Generations United, which supports intergenerational collaboration. “It’s a reciprocal relationship that engages and values the strengths of each generation.”

Members of Growing Griots gather at the Sankofa Children’s Museum of African Cultures in Baltimore, June 24, 2021, to discuss African history and storytelling. 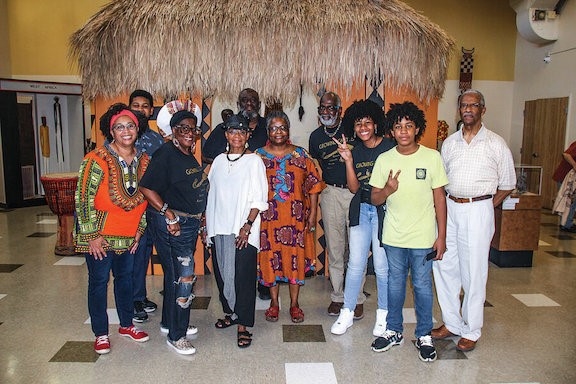 One of the stories Mr. Butler tells is how he was drafted into the Army in the 1960s. He explains what it felt like to be asked to kill, or to be killed, for his country at a time when he couldn’t drink out of a “whites-only” water fountain at home.

“We teach them that their mothers, fathers, grandparents, they are the heroes and sheroes, not just Harriet Tubman or Martin Luther King,” he says.

Janice Curtis Greene likes to use the example of Anansi the spider. The cunning West African folklore character is often depicted as either a tiny creature or a weak, old man, she says. So when she tells the story of Anansi – as she does at another Growing Griots event, this one in person – she makes sure they understand the power he represents.

“He’s the most vulnerable, insignificant entity,” says Ms. Greene. “But that character, through his mental ability, his gift of articulation, can talk his way in and out of any situation where the foe is much bigger, stronger, and supposedly more intelligent.”

Deborah Pierce-Fakunle (right) says Growing Griots gave her children a foundation for life. She and S. Bunjo Butler (left) are co-directors of the group, which explores Black history through traditional African storytelling. 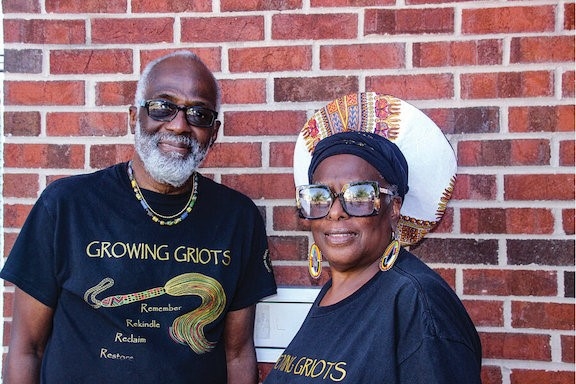 As she turns to the three children next to her, Ms. Greene warmly cautions, “People are going to think that you are insignificant. ... But your gift of speech, quick thinking, and ability to strategize make you as strong as Harriet Tubman.”

The children’s parents first brought them to Growing Griots to supplement the family’s home-school program. Now, the kids say Growing Griots has helped them come into their own voices.

In one activity, a mentor tells an African folktale to a student. The student then tells the same story back, focusing on getting the beginning, middle, and end right, but entirely in their own words.

“Over time, I got more comfortable standing up and speaking,” Naomi says. Since joining four years ago, she and her siblings have performed at The National Great Blacks in Wax Museum in Baltimore and shared African oral history on local news programs. “It just makes me feel more confident to be around people and be able to express my opinions without worrying too much about what other people think.”

Dr. Fakunle, who recently published an academic paper titled “What Anansi Did for Us: Storytelling’s Value in Equitably Exploring Public Health,” says that kind of honest storytelling helps bridge the gaps that would seem to divide us.

“When we have those moments to tell a story, honestly, openly, in a space of trust ... we’re reminded of the totality of our journey,” he says. “And it becomes ... not necessarily easy, but easier to at least acknowledge and appreciate the perspective that other people come from.”