“At the time of the revolution, more than one out of every five Americans was a slave—a higher proportion than at any other time in the country's history. Slavery was legal, and practiced, in all thirteen states.” (The Final Century of Slavery in the United States). Slavery, the practice or system of owning slaves, was adapted into American culture throughout the early 1600’s and wasn't abolished until 1865. Throughout the 1800’s, many U.S. citizens still supported the use of African Americans on plantations. Though the economy relied on their work, a small minority of people known as abolitionists started a movement to emancipate slaves and allow them to have the full rights of being an American citizen. One member of this group was a women by the name of Harriet Beecher Stowe, a knowledgeable and successful author. After observing slavery while on a trip with a colleague, Stowe felt compelled enough to write and publish a story that would show uninformed Americans how vicious slavery actually was. On June 5, 1851, Stowe published the first chapter of her series Uncle Tom’s Cabin in an abolitionist newspaper.  In a biography about Stowe, Tackach writes, “The author of Uncle Tom’s Cabin was a New Englander by birth and a Midwesterner by migration. Harriet Beecher was born in Litchfield, Connecticut, on June 14, 1881. Her father, Lyman Beecher, was a Congregationalist minister; her mother, Roxana Foote Beecher, died when Harriet was only five years old…” (Teckach 28). From a young age, Stowe possessed bravery which allowed her to persevere through her mother's death. Bravery is oftentimes thought of as how afraid you are of certain events or ideas. But in reality, it is a measure of mental strength and willingness to face adversity or danger. A hero must possess bravery in order to earn the strenuous title. A hero must also possess the trait of being strong willed in order to persist through arduous times. Bravery and a strong will are both traits that Harriet Beecher Stowe exudes which is why she is undoubtedly a hero.

https://upload.wikimedia.org/wikipedia/commons/3/31/UncleTomsCabinCover.jpgHammatt Billings [Public domain]Harriet Beecher Stowe contains the trait bravery which is how she was able to face rigorous tasks such as contradicting the harsh ideas of pro-slavery groups in the South. In an attempt to start a larger debate about the legality of slavery, Stowe started by writing a novel, in the hopes that it would spark a revolution of anti-slavery citizens. Despite her chaotic circumstances, Stowe still wrote Uncle Tom’s Cabin and the results were mixed. An example is, “In 1850 Calvin Stowe was called to a chair at Bowdoin College in Brunswick, Maine, where they had their last child. She then set about writing Uncle Tom's Cabin, which first appeared in serial form in 1851-1852 in the National Era, a Washington, D.C., antislavery newspaper…Not only in the South, where each newspaper was a sea of fury, but also in the North there were universal charges that the world of the slave had been melodramatically misrepresented.” (Harriet Elizabeth Beecher Stowe 6). When Harriet Beecher Stowe was preaching the abolishment of slavery, the United States economy still heavily relied on the work slaves provided. Because of this, many plantation owners would go to extreme lengths to keep their businesses running on slavery. After Stowe published her novel, it got major attention from the South, but not for an outstanding reason. The people who relied on slavery to make a living were outraged and heavily criticized the novel. Harriet knew the extent of how dependent the South was on slavery but still remained with her morals and published the book. It took immense bravery from Stowe to be able to face an entire enraged region and show them her beliefs. Not only did she endure the harsh opinions of the South from her first book, but wrote a second one despite the enraged critics. In an article explaining Stowe’s accomplishments, they wrote, “Though Uncle Tom's Cabin was received with wild attention, its reception was (except for the abolitionist press) almost uniformly hostile...Stowe answered her critics in 1853 with A Key to Uncle Tom's Cabin, a book designed to document the facts of the novel…” (Harriet Elizabeth Beecher Stowe 7). Even though the Southern critics were outraged, they weren't ethically entitled to their animosity. The way they were treating slaves was horrendous and Harriet wanted to show the truth behind her novel. Her book achieved much attention, due to the fact that she used an African American character to attach people to the novel. Once readers were attached, she would show them how horrendous and cruel slavery was by using the actions she experienced first hand on southern plantations. When the Southern critics were outraged, she created another novel which stated how all her findings about slavery were correct and proved them using her experiences on the farms. She was showing bravery by responding to the critics and accepting the challenge of exposing slavery for how horrendous it was. 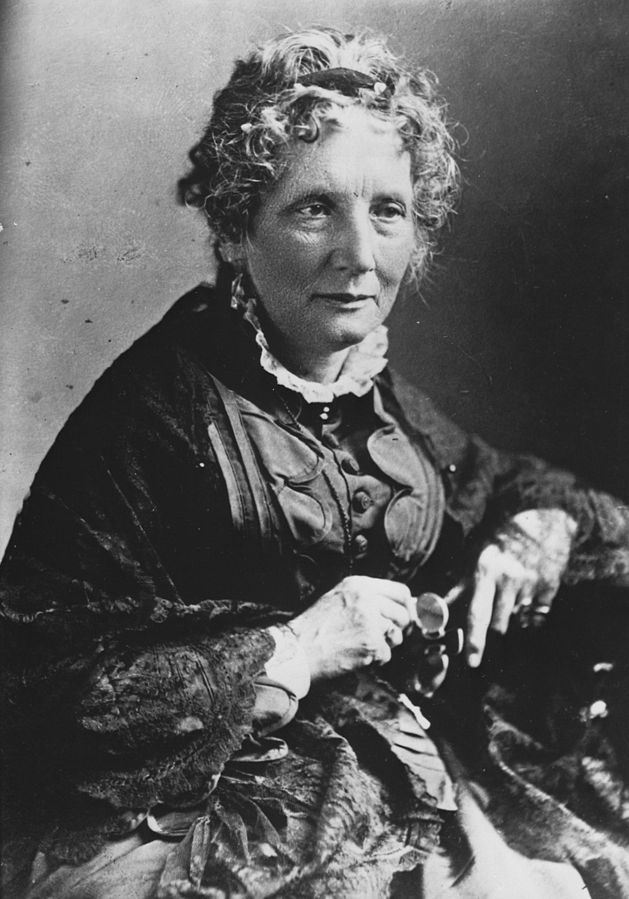 https://upload.wikimedia.org/wikipedia/commons/7/7b/Beecher-Stowe.jpgnot specified [Public domain]Along with bravery, Harriet Beecher Stowe also contained a strong will which is how she was able to defend herself and perseverar through the harsh pro-slavery critics. Though Stowe had already written numerous abolitionist novels, she wasn't satisfied with the amount of anti-slavery Americans she’d attracted. In order to achieve her goal of abolishing slavery, she wrote multiple more books. An article states, “Uncle Tom’s Cabin wasn’t the only book Stowe wrote about slavery. In 1853, she published two books: A Key to Uncle Tom’s Cabin, which offered documents and personal testimonies to verify the accuracy of the book, and Dred: A Tale of the Great Dismal Swamp, which reflected her belief that slavery demeaned society. In 1859, Stowe published The Minister’s Wooing, a romantic novel which touches on slavery and Calvinist theology.” (Harriet Beecher Stowe 8). Harriet was already a successful author who had reached a wide variety of people with her novels, but she stuck by her morals and created more anti-slavery literature. She had received wild outrage from the South on her past two books but still decided to address more important and controversial topics. Harriet Beecher Stowe shows that she has a strong will by persisting through the harsh critics and working for what her morals defined as right.

After Stowe’s days of informing the U.S. about how vicious slavery was, she still didn't stop. A biography states, “With the coming of peace, Stowe rented a cotton plantation in Florida, installed her son, Fred, as manager, and hired over a hundred former slaves. The Stowes had planned to spend their winters there, but the project proved to be unsuccessful. Stowe then bought an orange grove in Mandarin, Florida, and founded a school for former slaves.” (Harriet (Elizabeth) Beecher Stowe. 13). The Civil War ended in 1865 and along with it, slavery. After years of tedious and exhausting work from Stowe and many abolitionists like her, slavery was finally abolished. All of Stowe’s novels and articles acted as a catalyst to the Civil War and eventually to the elimination of slavery in America. Even though slavery was no longer legal, African Americans were not treated with the same amount of respect as Caucasian citizens. Finding work was a tedious and dangerous job for them and they still faced racial injustice. When Stowe noticed this, she had decided to open up a plantation and hire the freed slaves as workers. By doing this, Stowe was showing how she was strong willed and continuing to help slaves even after she ended slavery.

Harriet Beecher Stowe not only had bravery but a strong will also. These traits are what ultimately lead her to become a catalyst to the Civil War and to the abolishing of slavery. Stowe published literature about controversial topics, responded to critics and shared her ideas about slavery, all while raising a family. Harriet Beecher Stowe, while more successful and knowledgeable, inspires me to not be afraid of stepping outside of my comfort zone. She always had a bigger picture in mind and eventually succeeded to fulfil her dreams. I relate to her because I have a very strong will and when I'm compelled enough, I strive to make a difference. Though not as knowledgeable, successful, brave, strong willed, influential and experienced, I still remain confident that if Harriet Beecher Stowe can start a revolution, anything I set my mind to is possible as long as I stay strong willed and brave.