by Clarabel Skopec from San Diego, California in United States

be disappointment... later proved to be a great opportunity.” 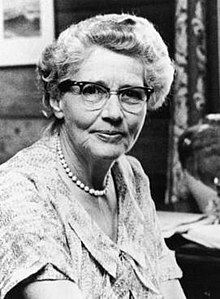 Helen Taussighttps://en.wikipedia.org/wiki/Helen_B._TaussigA little girl sat in a wheelchair, desperately ill, thinking all hope is lost. Helen Taussig, a pediatric cardiologist, developed a procedure that would save her. This little girl was the first child of many that would have a second chance at life because of Taussig’s revolutionary operation (Helen Brooke Taussig Contemporary). It was a discovery that found a way to help babies suffering with anoxemia get enough oxygen flow to the heart. Despite having dyslexia and facing discrimination as a woman, Helen Taussig earned a bachelor's degree at the University of California at Berkeley in 1921 (McLaren). She went on to become the first female head of the children’s heart clinic at Johns Hopkins Hospital in 1930 (Helen Brooke Taussig World). A hero is someone who is strong willed about making a difference. They are someone who sacrifices their time and strength to help others. A hero is willing to challenge the status quo. Through her hard work in cardiology, influential discoveries in the medical field, and determination to pursue her passion, Helen Brooke Taussig exemplifies a true hero.

Helen B. Taussig’s example of hard work was an inspiration to many. Her efforts in overcoming dyslexia, time spent in collecting research, and labor in the medical field all proved her worth ethic. Helen grew up to excel in academics, but struggled in school as a child. Author McLaren wrote, “As a child, the dyslexic Taussig laboured to become proficient in reading and was tutored by her father, who recognized the potential of her logical mind” (McLaren). Her determined mind set led her to accomplish great things, despite her learning disabilities. Through her diligent efforts, Helen displays the heroic attribute of a hard worker. While working as a pediatric cardiologist, Helen heard about mothers in Europe having babies with birth defects. “Taussig decided to investigate for herself and spent six weeks in Germany visiting clinics, examining babies with the abnormalities, and interviewing their doctors and mothers” (Helen Brooke Taussig Contemporary). Helen sacrificed six weeks of her life to examine pregnant mothers and babies with birth defects to find a problem. After much research and analysis, she discovered the cause was a drug known as Thalidomide, which many women took to counteract nausea. Helen’s heroic compassion helped her find solution for those suffering. Helen Taussig devoted her life to her career in pediatric cardiology, where she made many contributions. She wrote down her discoveries where, “Her two-volume Congenital Malformations of the Heart, published in 1947, became a standard in the field” (Helen Brooke Taussig World). By writing a book that would help future generations, Helen displays her commitment to helping others. Helen Taussig devoted hours on research to save lives and collect new data. By overcoming challenges and working tirelessly, Helen Taussig proved to be a hero.

Helen Taussig is a hero because she influenced many areas in the medical field. Dr. Taussig’s  discoveries changed the way babies with anoxemia were treated, gained the respect of top medical staff at John Hopkins Hospital, and reported a harmful drug to U.S. Administration. One of Taussig's most famous achievements was her successful operation on “blue babies”. Also known as anoxemia, those who sufferer with this condition die at a young age due to heart complications. “In the years that followed, the procedure, known as the Blalock-Taussig shunt, saved the lives of thousands of cyanotic children” (Helen Brooke Taussig Contemporary). Helen, along with her colleague Dr. Alfred Blalock, created a procedure that solved the breathing issues in babies with anoxemia. In a short time, news of this successful operation spread around the world and soon other cardiologist were using it. Helen’s success continued to grow as she achieved large recognition. “Helen Taussig was the founder of pediatric cardiology and one of the first outstanding women in American medicine” (Helen Brooke Taussig World). Becoming the first female to run clinics gave her the prestige and influence to impact her field. Helen's creative mind drove her to find solutions that impacted medical treatments across the globe. Helen Taussig went to Europe to examine mothers with birth defects. After finding the problem, a biography reads, “In 1961, after investigating reports of numerous birth defects in Germany, Taussig determined that the cause was use of the drug Thalidomide, and it was her intervention that prevented Thalidomide from being sold in the United States” (Helen Brooke Taussig Contemporary). She discovered pregnant mothers in Europe would often take a sedative called contergan, which helped with nausea, and was causing birth defects. Taussig was a key contributor in convincing the U.S. Food and Drug Administration to ban the sale of this drug. Her heroic work saved thousands of lives for generations to come.

Helen B. Taussig’s determination is portrayed through trials of discrimination, going deaf, and her undying loyalty to patients. Helen decided on a medical career but faced hardships when trying to advance in her education. A biography writes, “Although she began her studies at Harvard University, the medical school did not admit women to its regular curriculum, and would not begin to do so until 1945” (Helen Brooke Taussig Contemporary). Helen Taussig is a hero because she was determined to pursue her interest in medicine, even though she faced sex discrimination. Although she could not receive a degree at her first college, she went on to explore new ideas in the medical world. Her persistence was important for treating the “blue babies” syndrome. Without her dedication she would not have made the difference she did. Taussig faced another challenge when working as a cardiologist. McLaren explains, “In her 30s she grew deaf, and as a result she developed an innovative method to explore the beat of the human heart using her hands to compensate for her hearing loss” (McLaren). Although this great challenge arose, Helen used it to her advantage. In a new method, she detected beating patterns that were similar to those with one who had anoxemia syndrome. Her personal restrictions mounted but she persevered. Helen stayed in close touch with her patients whom she cared for deeply. “She never found it necessary to distance herself from the critically-ill children that she treated, or from their parents” (Helen Taussig Notable). Although Helen retired, she never lost contact with her patients. This shows her dedication to helping the lives of others. She continued to make a difference even when she was not working for money. She was heroic for her selfless devotion to those in need. Through Helen Taussig’s determination throughout her life, she exemplifies a hero.

Helen Brooke Taussig is a hero for many reasons. She was dedicated to the field of medicine, she worked tirelessly to improve the lives of children and her influence was felt for generations. Throughout her life Helen struggled with physical and mental challenges. But she refused to let them stand in her way. She worked in pediatric cardiology where she found a way to treat a syndrome known as “blue babies”. She also discovered a reason multiple mothers were having babies with birth defects in Europe (Helen Brooke Taussig Contemporary). Helen became the president of the American Heart Association and founder of pediactric cardiology because of the time and hard work she put into her career (McLaren). She saved many lives while inspiring the world to pursue their passion. Helen Taussig inspires me because of her striving to make an impact on the world. People make contributions to bettering the world in many ways, but for Helen it was from her work as a doctor. She had innovative ideas and a determined mindset which led her to do extraordinary things. She was not in it for the fame or the fortune but to save kids and babies from illness. This is why I believe Helen Taussig is a true hero.