Helping homeless moms ‘get their shot’ at opportunity and education 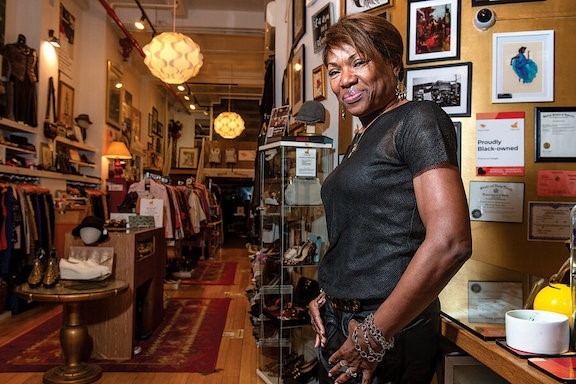 Deborah Koenigsberger founded this upscale Manhattan resale boutique called the Thrifty HoG to help homeless moms with job training and give them an opportunity to move out of the shelter system.Ann Hermes, CSM Staff

Deborah Koenigsberger was taking her little boys to the playground one fall morning in 1994 when she stopped short, seeing a mother and her toddler sleeping in a cardboard box. A longtime New Yorker with a comfortable lifestyle, husband, connections, and a business, Ms. Koenigsberger knew she could help women like this – but didn’t know how.

So, after speaking to a friend who volunteered with homeless single moms, Ms. Koenigsberger began advising these women on how to dress and carry themselves. That December, she shifted money from Christmas presents her sons didn’t need to provide Christmas for 135 shelter kids. She hired a Santa, catered food, and gave each child a big red bag packed with toys and a stuffed animal. Eventually, she added gifts for moms. For two years, Ms. Koenigsberger pretty much funded everything herself.

The more involved the Manhattan mother and fashion stylist became, the more she realized how dismal life could be for homeless single moms. Many are fleeing domestic violence, slipping away from home with their children and what they could carry. Once assigned a shelter, they may find little more than four walls, beds, patchy privacy, and sometimes shared bathrooms. Worries include vermin, theft, filth, and stigmatizing conditions. Poorly paid, overwhelmed, or inexperienced case managers face burnout. Well-intended rules can complicate finding permanent housing.

Within a few years, friends were donating to Ms. Koenigsberger’s Hearts of Gold, a charity that works in shelters with single moms and children. The objective: to empower women to control their futures through education and employment.

“My goal is to help homeless moms get their shot. Lots of the families end up in shelters because they never had access to two of the most powerful game changers: opportunity and education,” Ms. Koenigsberger says.

The little-known nonprofit has a $1.2 million annual budget and sponsors 15 shelters. It has raised more than $20 million since launch and has helped more than 36,000 shelter residents via a holistic approach that includes job training, early childhood and after-school education, babysitting, tutoring, field trips, and summer camps. The group has donated thousands of stocked school backpacks, presents, winter coats, and care packages for pregnant moms and families moving into shelters or long-term rentals. 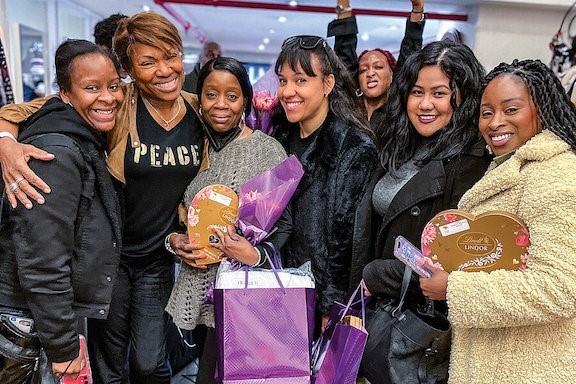 Lizette Kodama/Courtesy of Hearts of GoldDeborah Koenigsberger (second from left) celebrates with Hearts of Gold moms honored for their achievements recently.

Jacqueline Brown met Ms. Koenigsberger in 1999 when she and her daughter lived in a shelter. Ms. Koenigsberger shepherded her through her GED tests and helped prepare her for a job working with homeless people. Last year, with Hearts of Gold funding, Ms. Koenigsberger took the Brooklyn mother and her son on a college tour and later outfitted his Drake University dorm room in Iowa.

“She instilled in me that anything is possible,” says Ms. Brown, recalling the difficulty of raising her kids on her own. “She empowered me to know that if I can do it, I can be a good example for my children.”

In 2010, Ms. Koenigsberger opened the Thrifty HoG (short for Hearts of Gold) in Manhattan’s then up-and-coming Flatiron/NoMad areas. A posh resale clothing boutique, it provides another source of funding as well as job training for shelter residents who may never have held a job.

Almost 40 mothers have gotten experience with everything from customer service and quality control to working a cash register and keeping the books. Thrifty HoG is next door to Ms. Koenigsberger’s own French-inspired boutique Noir et Blanc, which had been her day job as proprietor before shifting almost entirely to Hearts of Gold, where she draws a salary.

Around 10,000 families with children live in city homeless shelters, with 69% of families headed by women. Most are women of color.

As of last year, families averaged 520 days in shelters. Conditions are rough by design.

“The city’s philosophy is that ‘this is temporary. We don’t want people to get too comfortable,’” says Deborah Padgett, an expert on homelessness at New York University. Family homelessness started to become chronic in the 1980s when the federal government slashed funding for affordable housing, Ms. Padgett says.

Performer Rhonda Ross, singer Diana Ross’ daughter, is on Hearts of Gold’s advisory council. She remembers a shelter mother who was buying chicken legs and wings rather than the whole bird, which is more economical, because she didn’t have a knife to cut the chicken.

“At the lowest point in a woman’s life, [Deb] can offer things that seem small to us but ... can make or break someone else,” Ms. Ross says.

Laura Diaz met Ms. Koenigsberger in 2006 when she lived in a shelter. She had a toddler and an ailing older son, and was pregnant with her third child. After Ms. Diaz moved into permanent housing, Ms. Koenigsberger brought furniture, food, and money to cover bills. She also helped Ms. Diaz earn her GED diploma, become a nurse, and even deliver that third child.

“Everything about who I am and who I’ve become ... is because of her,” says Ms. Diaz, who now lives in Florida, works for a pharmaceutical company, and owns a business doing taxes and notary work and teaching first aid. “I wasn’t raised ... to feel special. In my family, nobody ever amounted to anything, and I never thought I would either.

“I’m so grateful to her for showing me who I can be.”