by Mustafa from San Diego, California in United States

Failure will never overtake me if my determination to succeed is strong enough.

The year was 1863, in Greenfield Township, Michigan a child named Henry Ford was born. Henry Ford is best known for creating the Ford Motor Company. Ford grew up a farmer, yet his interests were more in machinery, rather than farming. Whilst working on the farm, he remodeled tools at his father's farm and later developed the idea of mass production. After his marriage, Henry Ford had been given money to buy an acre of land for farming. Instead of using that money to purchase more farmland, Ford decided to move to Detroit where he became an engineer for the Edison Illuminating Company. In 1896, Henry Ford had created one of his first vehicles, The Quadricycle. Once he completed his project, he decided to take it for a ride. Almost immediately the vehicle had broken down in an embarrassing scene. Despite this setback, Ford had redesigned and recreated the vehicle multiple times to achieve the results he wanted. In 1936, he found the Ford Foundation and later accumulated more than $8 billion in sales worldwide. Ford suffered from strokes years later and died in 1947. Many people know Henry Ford as the man who created the Ford Company, but not everyone knows that he created the company because of his determination and generosity. 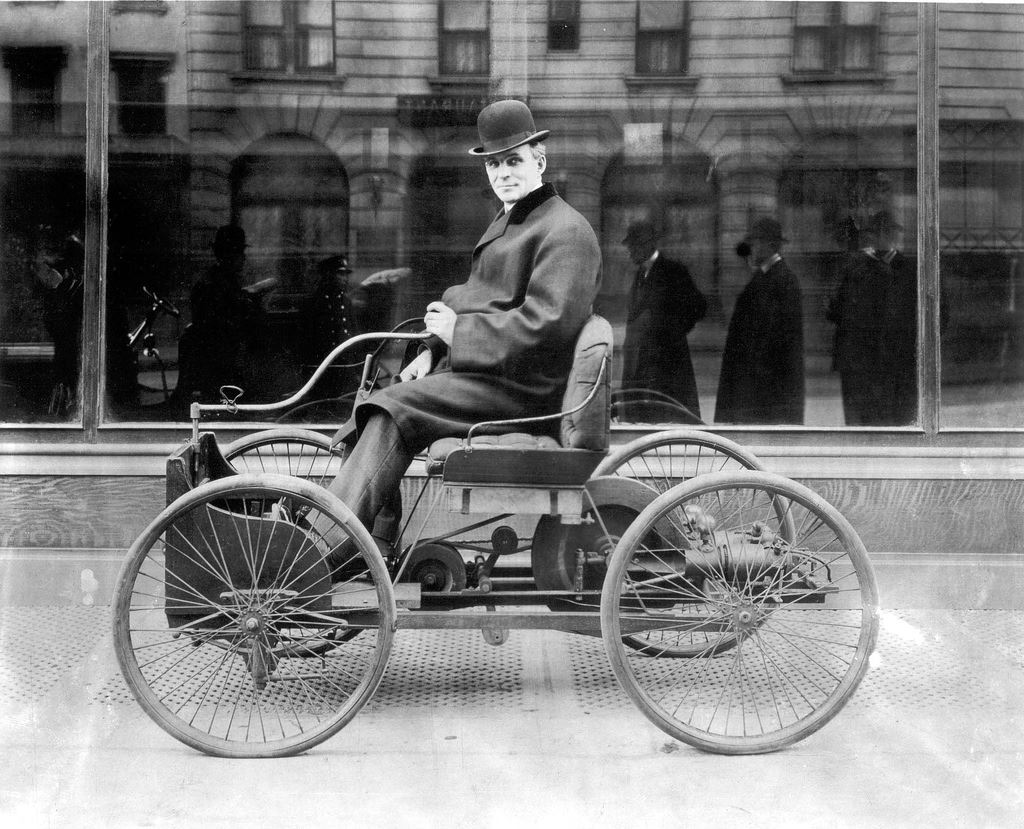 Although Henry Ford didn’t succeed when he created The Quadricycle, he was still determined to remake it, even after his father disapproved Ford’s goal of creating vehicles. It took him around five years to create a better automobile. With the help of William Murphy, Ford had created one of the fastest vehicles in the early 1900s. “In June 1896, Ford took an historic ride in his first automobile that was observed by many curious Detroit onlookers. The Quadricycle broke down in a humiliating scene. By 1899 Ford created a more proper-looking motorcar with the help of wealthy businessman William Murphy....In the same year Ford founded the Detroit Automobile Company. Within 3 years Ford had built an improved, more reliable Quadricycle, using a four-cylinder, 36 horsepower racing engine. In 1901 his car beat what was then the world's fastest automobile in a race before a crowd of eight thousand people in Grosse Pointe, Michigan” (“Henry Ford” Gale). After Henry Ford won the race in 1901, he redesigned the vehicle once again. He grew so invested in the new model of the Quadricycle, that even his partners, who were helping him create and fund the vehicle, grew irritated because of his drive to perfection. During this time, he, his investors, and partners established the Ford Motor Company. Ford showed his inventive skills during his teen years, back in his father’s farm. Although his father disagreed with Henry’s passion for engineering, it didn't deter his lifelong vision. “Ford was raised on his father's farm but developed a distaste for the farm lifestyle and, instead, became fascinated by machinery. He began tinkering with farm machinery that he was responsible for operating and without any formal training, became an excellent self-taught mechanic and machinist. While in his late teens, he even designed and built his own engine-based vehicle.” (“Henry Ford” Business). Ford's father gave him the money to invest in purchasing another farm. Instead, Ford used and invested the money for spare engine and car parts. With the parts, he created a working vehicle engine. Ford then created the Quadricycle and although he didn't succeed at first, he wasn't discouraged and stayed strong minded and determined to rebuild the machine. 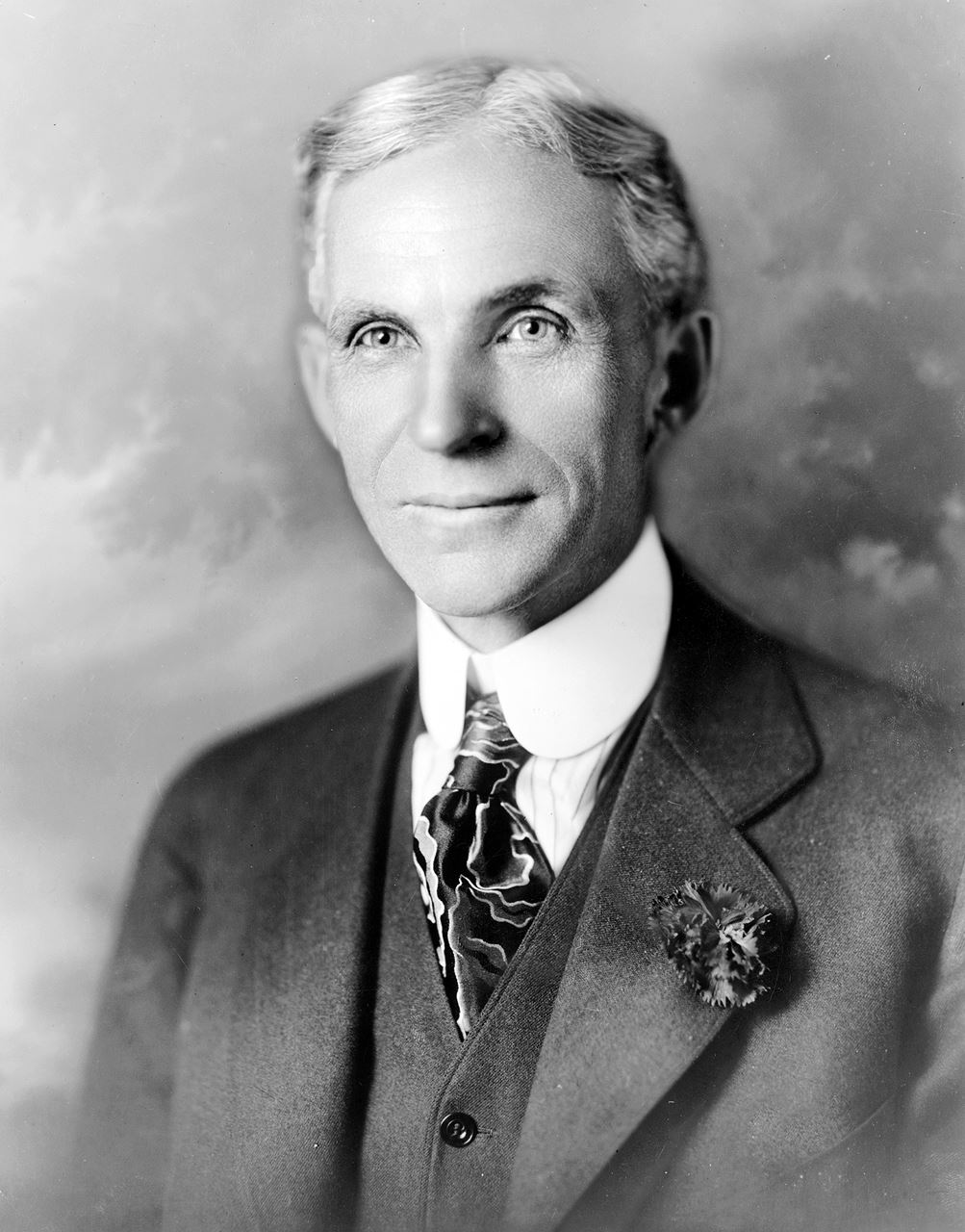 Not only was Ford determined throughout his life, he was also generous. He helped out his workers and did his best to help out during World War II. Ford gave extra money to his workers and almost doubled their pay. After increasing his workers pay, he decreased the prices of his automobiles. “Mass production significantly cut down on the time required to produce an automobile, which allowed costs to stay low. In 1914, Ford also increased the daily wage for an eight-hour day for his workers to $5 (up from $2.34 for nine hours), setting a standard for the industry” (History.com Editors). He got this extra money from his invention of mass production, which he spent on his family and on his workers. Not only did Ford spend the money for the people he knew, he also spent the money on American soldiers who were fighting during World War I and II. “While running Ford Motor Company, Ford used his enormous wealth and power for social causes. For example, he made an ill-fated attempt to end World War I, before the United States was drawn into it. In 1915, he set sail on his "peace ship," Oskar II, and sailed to Europe to seek an end to hostilities.” (History.com Editors). Before he spent his wealth on the soldiers, he tried his best to prevent World War I from happening, Although unsuccessful, he still felt obligated to bring forth peace and prosperity.  In 1915 Henry sailed his ship across Europe to stop multiple hostiles. Henry Ford was a generous and thoughtful man throughout his life. He tried to stop World War I, attempted to stop hostels in Europe, decreased the prices of his vehicles, and increased his workers pay.

Henry Ford's First Car - The website, Henry Ford's First Car, explains exactly what encouraged him to create the Quadricycle and how he created the machine. It includes sections that discuss multiple subjects, such as the partners he met when creating the Quadricycle.
Ford Motor Company - On the official Ford Motor Company website, there is a section that delves into Ford's life. The timeline provided describes the location and date of each significant incident.
Henry Ford Childhood - The website, Henry Ford Childhood, delves into Ford's childhood and other significant events in his life. There are multiple sections provided, in the botton of the page, that include slideshows, timelines, and concept maps.