¨My mother told me to be a lady. And for her, that meant be your own person, be independent.¨ (Ruth Bader Ginsburg) 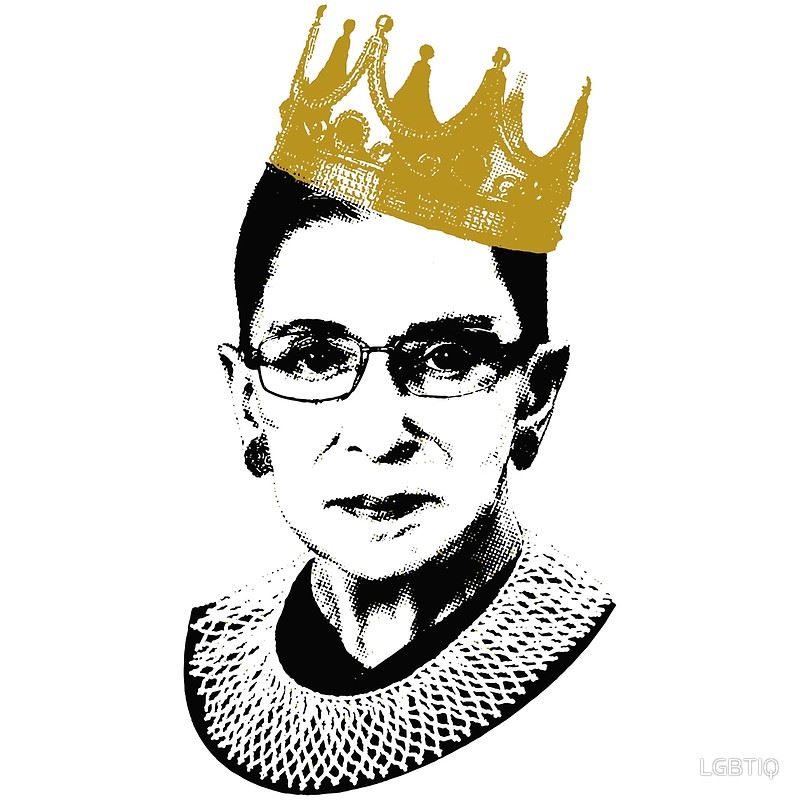 Notorious R.B.Gredbubble“Heroes arrive when we need them most. They define us and point us in a direction… And as long as we need examples of how to live, as long as we aspire, we will never be too old for heroes” (Granger). David Granger’s short article about the importance of heroes in society stresses that as long as we have personal perils, we will always search for an altruistic figure to look up to. In this day in age, finding heroes worthy of our admiration is a difficult task. As a society, we are in desperate need of a larger than life figure to depend on through our struggles. However, discovering a true hero is a demanding task. We must sift through hoards of empty, fame-driven celebrities before we turn up a deserving heroic figure. Often times, looking at the environment immediately around us is more fruitful than looking to the stars for a champion. True heroes are discovered in everyday activities. They are the individuals who go above and beyond in their everyday lives. Examples of ordinary heroes are teachers who strive to educate students beyond the given curriculum, teens who choose standing out over conformity, or a kind soul who opens the door for you on your way into the coffee shop. Heroes leave their sliver of the world better than they found it. Authentic heroes are ordinary individuals who overcome setbacks and achieve extraordinary things.

Ruth Bader Ginsburg is that type of hero. She uses her God-given talents to conquer setbacks and change the world around her. Born to humble beginnings on March 15, 1933 in Brooklyn, New York, Ginsburg was raised by her loving father, Nathan, and dedicated mother, Celia. Ruth excelled in school, and was one of nine women in her class of 500 men at Harvard Law School in 1956. She later transferred to Columbia Law School when she and her husband moved to New York City. Following her graduation, Ginsburg had difficulty finding a job worthy of her talent, as she was discriminated against because of her gender. With the recommendation of the dean at Columbia Law, she was finally offered a clerk position working under a district court judge. After two years of clerkship, Rutgers School of Law hired Ginsburg as a professor in 1963. This job, however, was not without its drawbacks. She was paid significantly less than her male counterparts and was a part of the gender minority as one of twenty female law professors  nationwide. Concurrently, Ginsburg founded the Women’s Rights Project at the American Civil Liberties Union. As director of the ACLU Women’s Rights Project, she argued six gender discrimination cases in front of the Supreme Court between 1973 and 1976, winning five. She strategically tackled specific discriminatory statues that hindered both men and women, thus appealing to a completely male justice panel. Her outstanding and groundbreaking work gained the recognition of President Jimmy Carter, who appointed her as one of three judges to the U.S. Court of Appeals for the District of Columbia Circuit in 1980. Subsequent to her thirteen years of service, President Bill Clinton appointed her Supreme Court Justice. She is most famously known for being the second female Supreme Court Justice, and has held the revered position since 1993. Ruth humbly rose above her personal struggle against discrimination and through her valiant efforts, improved the lives of millions. A trailblazer in activism, Ruth Bader Ginsburg lights the way to gender equality, wielding her sharp mind as a sword and garnering the admiration of supporters. 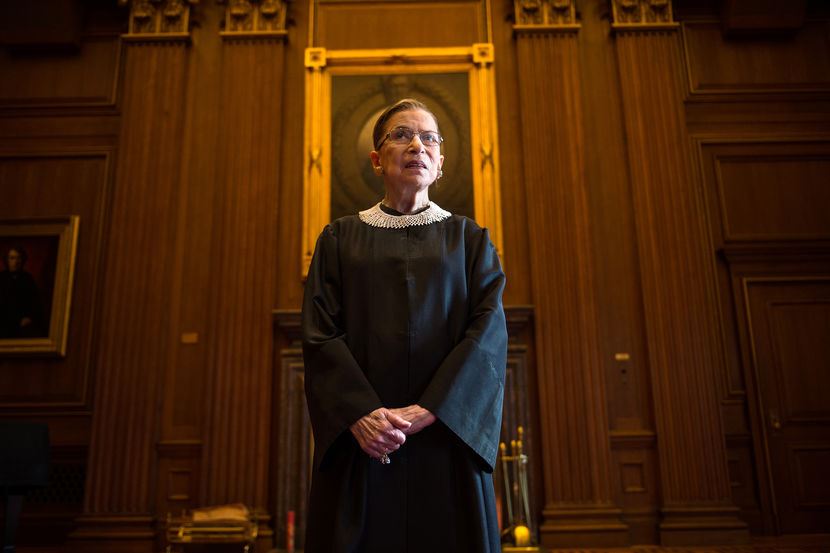 The infamous Ginsburg in all her glory.MSNBC.comGinsburg has dedicated her unparalleled talents to the unglamorous and profitless work of activism. Ruth Bader Ginsburg experienced first hand discrimination early on in her education and career, but rather than let obstacles discourage her, she rewrote the narrative. Ruth, not only for herself but also others, utilized her strategic mind and depth of knowledge in law to advocate and fight for equal treatment of men and women in a unique way. “Ginsburg saw the legal web holding women back, and she took it upon herself to tear it down… (she) designed and implemented a strategic assault on state and federal legislation that distinguished between men and women. The challenge she faced was substantial… the federal courts consisted almost entirely of men” (Totenberg). Ginsburg willingly offered her time and skills in hopes of conquering an overwhelming challenge. She was unintimidated by the seemingly overpowering men that made up the majority of the federal court. Ruth witnessed firsthand the injustices that continued to prevail in court, so she took action. She wisely developed a unique plan that toppled specific gender role bound federal legislation. Rather than turning the legal battle into a raging act of feminism, Ruth primarily argued cases in which both sexes were the victims of disparity. Ginsburg opened the Supreme Court’s eyes and displayed the gaping holes of gender inequality within the Constitution. In the face of a daunting task, Ruth cleverly made great strides towards gender equality. She unselfishly gave up valuable time and energy in hopes of bettering the lives of average Americans, desperate to ensure that citizens would never have to face the same cruel injustices as she did. Years later, Ginsburg continued striving for true equality under law in her profession. Most recently, Ginsburg gave a powerful dissent against the Burwell v. Hobby Lobby case. When five of her colleagues ruled that for-profit companies are allowed to deny coverage of contraception to employees based on a religious objection, Ginsburg responded with a passionate thirty-five page disagreement. Post-ruling, she unabashadley voices her opinion, saying, “Any decision to use contraceptives made by a woman covered under Hobby Lobby’s or Conestoga’s plan will not be propelled by the Government, it will be the woman’s autonomous choice, informed by the physician she consults” (Ginsburg). Although her opinions were not those of the majority, she went above and beyond in voicing her sentiments. Ruth demonstrated great courage when she stood up among her prestigious collegues and spoke for the minority of women that had been ruled against. In that moment, she became a voice for the voiceless. Ginsburg rose above her small stature and projected a daunting and commanding presence. Even when Ruth faced defeat, she went down swinging in every effort of the advancement of women’s rights under the law. Ginsburg used her position as a platform for activism meanwhile applying her talent of intelligence. Her brazened passion for equality shined through in all her endeavours.

Ginsburg exudes the qualities of a true role model through her empowering words of wisdom. She unashamedly shared her encounters with calamity in hopes of propelling others towards greatness, saying: “You can’t have it all at once. Who - man or woman - has had it all, all at once? Over my lifespan I think I have had it all. But in different periods of time, things were rough” (Ginsburg). Ginsburg achieved a level of relatability with her admirers that empowered them on a personal level. Even years later, individuals can be inspired by Ruth´s words of wisdom. They can relate to her experiences of balancing being a wife, mother, and working woman. Rather than putting on a haughty persona, Ginsburg stays approachable in her advice. Her approachability is shown in her use of small words, rhetorical questioning, and personal anecdote. Her empathy makes her an accessible hero. Ginsburg’s down to earth personality encourages others through setbacks and urges them towards becoming exceptional. Although Ruth is an octogenarian, she stays current with social culture, and speaks timeless words of wisdom. She eloquently states her personal definition of the evolving feminism movement, sharing, “Feminism … I think the simplest explanation, and one that captures the idea, is a song that Marlo Thomas sang, 'Free to be You and Me.' Free to be, if you were a girl—doctor, lawyer, Indian chief. Anything you want to be. And if you’re a boy, and you like teaching, you like nursing, you would like to have a doll, that’s OK too. That notion that we should each be free to develop our own talents, whatever they may be, and not be held back by artificial barriers—man made barriers, certainly not heaven sent” (Ginsburg). Ginsburg empathizes with the struggles everyone faces when their aspirations are not deemed “gender appropriate” by society. However, she encourages others to be themselves, regardless of gender stereotypes. Her interpretation of personal freedom is exemplified in everything she does, and is clearly displayed in her definition of feminism. She urges others to feel free to be their own person, and use their talents to achieve great things, just as she has. We all strive for greatness, and Ruth Bader Ginsburg’s words empower us to achieve our best. She serves as a role model, sharing perspicacities and empathizing with others through her personal experiences. Ginsburg discloses her anguish in hopes of emboldening others, thus gaining the admiration of supporters. 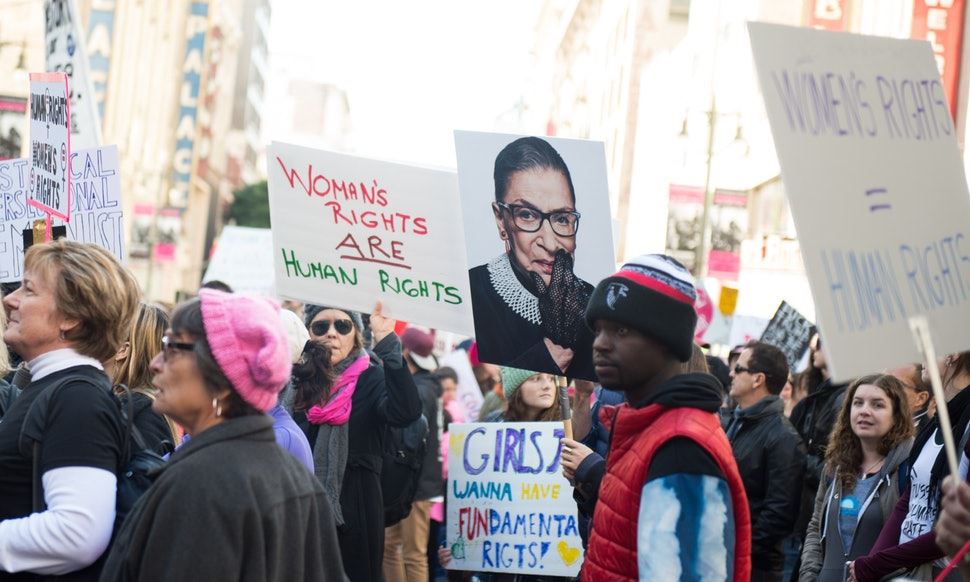 RBG watches over the Women´s March on Washington attendees.BustleRuth Bader Ginsburg valiantly arose from the tangled weeds of discrimination and uses her negative experiences as fuel for achieving great heights. Her superb intelligence aides her in obtaining lofty goals, as well as earning well-deserved admiration from her supporters. Ruth´s relentless spirit continues shaping current America, and gave rise to gender equality under Constitutional Law. Her unrivaled loyalty to American Law and the position she holds are unlike anything our country has seen. She put her nose to the grindstone and works double time for the position she has now as the second female Supreme Court justice in U.S. history. Although she is now revered for her accomplishments, Ginsburg still empowers others with her raw statements. She willingly exposes her flaws, thus connecting with people on a deep personal level.  In a world desperately in need of virtuous role models, Ruth has stepped up to the plate and met the mark of a worthy hero. Ginsburg proves day in and day out that with resilience you can accomplish anything, no matter who you are and what circumstances you face. As a woman, I have grown up acutely aware of arbitrary boundaries I will face in every aspect of my life. In our current social environment, gender inequalities have become inescapable. I have grappled with frustration and fear of knowing the looming hindrances I will face in the real world. As I saw issues that personally affect me, such as women’s rights and school safety, the more irked I became. On my own I decided that I must take action, rather than standing idly by. This year, I have become involved in two nationwide movements. In January, I attended the second Women’s March. While walking marching the streets of Downtown San Diego, I gazed upon multiple signs bearing an elderly woman and the caption “Notorious R.B.G”. Curious, I went home and discovered just who the notorious Ruth Bader Ginsburg is. Her story inspired my continued involvement in activism. I rallied alongside fellow students at the March For Our Lives and walked out of class arm in arm with my classmates bent on making change. I have not only demonstrated, I have also become involved with Nighthawk Activists United. I become energized when I am with of a group of like-minded people, raising awareness and providing meaningful solutions to social ailments. My ultimate aspiration is leaving my portion of the world a better than I found it, just as my hero Ruth Bader Ginsburg continues doing.

Hailey Bunsold is a student in San Diego, California. She is an aspiring journalist and full-time beach enthusiast.