Hillary Clinton, an influential and independent woman with a passion for politics, is worthy of the title "hero" because of her willingness to sacrifice her needs for those of her country and her constant desire to improve herself.

by Saaya Sitlani from San Diego, California in United States

"...my worst quality is that I get very passionate about what I think is right." 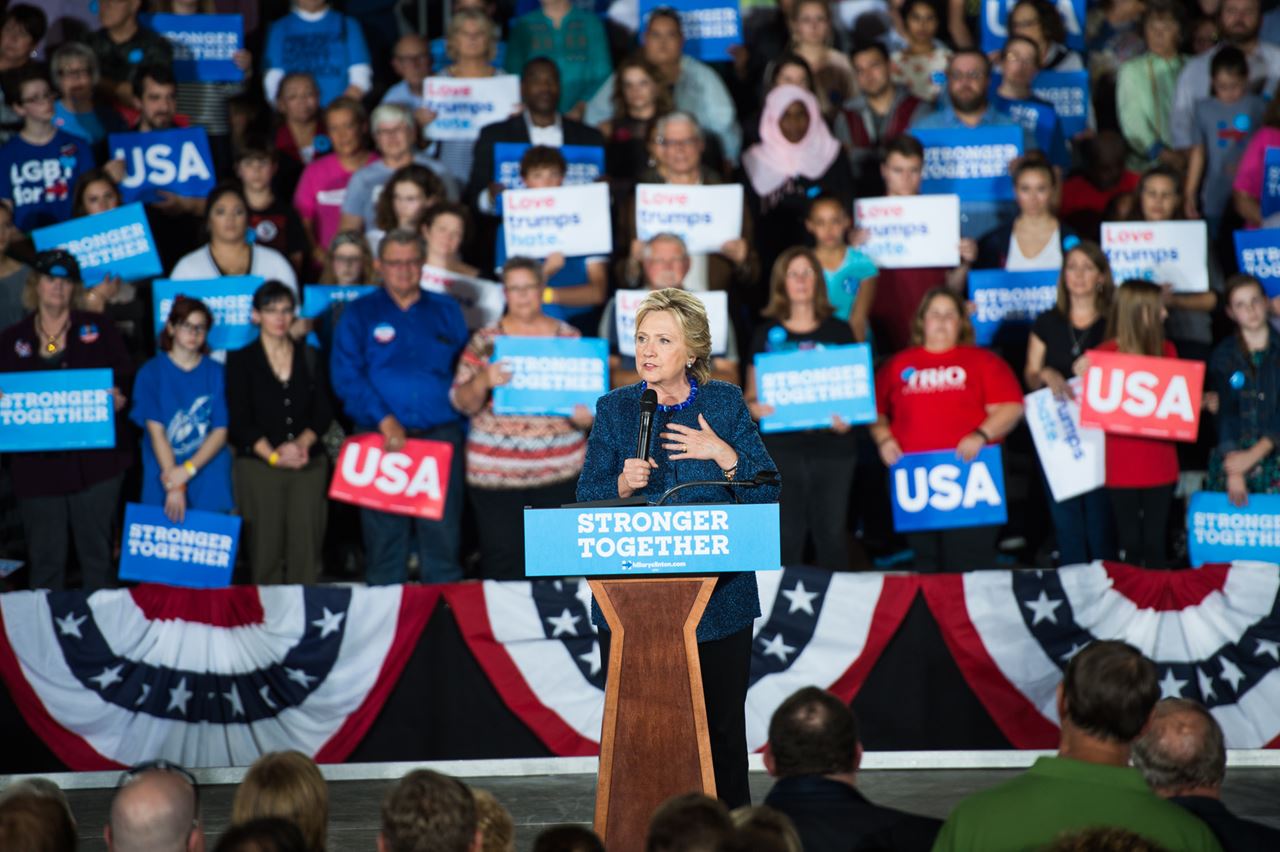 Hillary Clinton Unites Her Peoplesunlightnation.com“We have a lot of corruption in our society. But we mustn’t assume that everything is always basely motivated. We should allow for the heroic impulse - which is to be greater than oneself, to try to find another version of oneself, to grow” (Stone). As stated by Oliver Stone in the article Where I Find My Heroes, a hero is defined by the heroic impulse, or the desire to be the best one can possibly be. Heroes are looked up to every day by society; they are seen as role models for our everyday lives. Therefore, these admired figures must have certain traits to make them worthy of their people’s approval. A deserving hero must possess selflessness, or the willingness to sacrifice one’s own needs for someone else. For example, a mother giving up her own meal and going hungry so that her child can eat displays true self-sacrifice. The possession of this trait shows that one values others’ needs as much as or even more than their own, and is willing to sacrifice their wellbeing for another. In addition, a hero should pour hours of effort into improving oneself, constantly looking for ways to grow and persistently striving for perfection. Consistently working to be the best version of oneself emphasizes the desire to adapt and attain perfection. Someone worthy of the heroic stature should consider other people’s needs their first priority and display true selflessness, as well as passionately persevere towards being the best they can be. 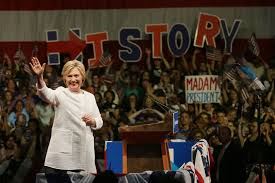 Hillary Clinton's Campaigncleanwateraction.orgHillary Clinton’s influential position in politics along with her inspirational qualities and actions satisfy the criteria of a deserving hero. Not only was she Senator, First Lady, and Secretary of State of the United States, but she also secured the Democratic Party’s nomination in the presidential election of 2016. Clinton withdrew from her Republican-influenced childhood and went on to become one of the most important figures in Democratic politics. After spending over 25 years in politics, she ran for President in 2016. Although she lost to Republican Donald Trump, she became a household name for her passionate influence and heroic qualities. In addition to being a touching and persevering political figure, Hillary Clinton’s willingness to selflessly embrace her people’s needs and the hard work she invests toward her constant self-improvement make her an admirable figure to look up to. 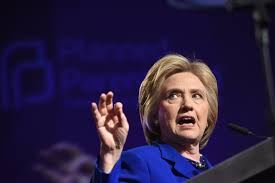 Hillary Clinton Speaks Outtime.comHillary Clinton consistently displays selflessness and considers the needs of her people her first priority. Her actions make her worthy of the title “hero” because she puts America’s needs before her own, no matter what the consequences. After learning of Congress’s neglect toward parts of the country that needed the most help, Clinton went against their actions, sacrificing her reputation to help her people: “When Congress wouldn’t do enough for rural areas and small towns, Hillary didn’t back down. She launched an innovative partnership in New York with eBay and local colleges to provide small businesses with tech support, microloans, and training programs to sell their goods online” (The Office of Hillary Rodham Clinton). Clinton “didn’t back down”, even after being nudged to do the opposite by her superiors in Congress. Her selflessness and will to do what is best for her country is exhibited through her disagreement with Congress on such an important issue. Not only did she go against what officials wanted, but she also showed her true self-sacrifice and prioritization of her people when she believed their needs were more important. Additionally, when Clinton ran for President in 2008, she lost to Obama in the primaries, then turned around and vigorously campaigned for him because she believed it was best for her nation: “In January 2007 Clinton announced she was running for the Democratic presidential nomination in 2008… Her failure to win the nomination was viewed as a bitter disappointment by many women, raising a question about whether such women would switch their loyalty to Obama as the presidential candidate. In the general election, both Bill and Hillary Clinton campaigned for Obama” (Caroli). Hillary Clinton’s loss was viewed as a “bitter disappointment”, describing just how much pressure was on her to win the nomination. However, Clinton chose to campaign for Obama anyway. This self-sacrificing action displays her true belief that her people should come first, as she put aside the long and hard race she had fought because she believed that America needed a truly diligent president. Even after facing a damaged reputation from her loss against Obama, Clinton let go of her ego and supported him, standing by her staunch belief that her people always come first. Hillary Clinton’s risky steps to help small businesses and her willingness to put aside her pride and support her former opponent in the 2008 presidential election show her true selflessness, especially when it comes to her nation’s needs. 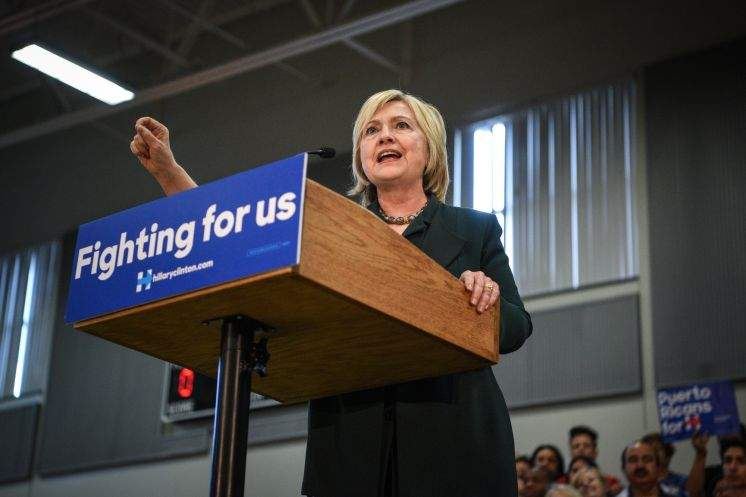 Hillary Clinton Rallies Her Peopletampabay.comHillary Clinton displays her desire for self-improvement by working relentlessly to reach the best version of herself. After losing the 2016 presidential election, Clinton took the opportunity to go over her mistakes and find aspects she could improve upon, claiming all responsibility for what happened: "I go back over my own shortcomings and the mistakes we made. I take responsibility for all of them. You can blame the data, blame the message, blame anything you want - but I was the candidate” (Clinton). Clinton’s acceptance of her mistakes without hesitation and her eagerness to go over them in order to ameliorate herself shows how important self-improvement is to her. Even after facing major setbacks in her campaign, Clinton’s first thought is how she can get better and fix her mistakes. Her heroic status is elevated by her constant desire to improve, as depicted through her eagerness to fix all the issues she faced during the 2016 election. Additionally, Clinton’s steadfast beliefs about how people should handle their flaws displays her stance on striving to be the best version of oneself: “For a candidate, a leader, or anyone, really, the question is not ‘Are you flawed?’ It’s ‘What do you do about your flaws?’ Do you learn from your mistakes so you can do and be better in the future? Or do you reject the hard work of self-improvement and instead tear others down so you can assert they’re as bad or worse than you are?” (Clinton). This advice that flaws should be worked on and improved upon, not denied, shows that Clinton believes in being open and improving herself rather than flatly stating that she is perfect. Clinton’s advice to ask oneself “Are you flawed?” shows her belief that the first step in fixing mistakes is to admit one’s flaws. Clinton’s review of her mistakes after a loss and her belief that flaws should be addressed, not denied, show her ultimate goals of being the best version of herself she possibly can by adapting and striving for perfection.

Using her hard work and passion toward consistently improving and her selflessness when it comes to her people’s needs, Hillary Clinton has achieved a heroic stature for her influence in politics. By taking advantage of her authoritative position, Clinton endeavors toward making her country better, constantly embracing her people’s needs and working toward her passions. After spending almost her entire adult life in law and politics, Clinton knew the consequences of running for President; still, she chose to run because of the good it would do for her people and her nation as a whole. Not only does she believe that her country should be the best it can, Hillary Clinton also strives to improve, constantly trying to reach the best version of herself. "Every day that I was a candidate for president, I knew that millions of people were counting on me and I couldn’t bear the idea of letting them down, but I did. I couldn’t get the job done and I’ll have to live with that for the rest of my life” (Clinton) Clinton takes ownership of her mistakes and strives to become a better version of herself. This makes her an inspiration, as she continually believes there is room for improvement and wants to make her nation the best it can be. I look up to Hillary Clinton because of her repeated actions that display her prioritization and focus on her people’s needs, as well as her constant desire to fix her mistakes and work toward her goals. Her consistent improvement of herself has inspired me to face my flaws and fix my mistakes in order to improve, as well as put the needs of those around me before my own. Clinton deserves to be admired by all Americans; not only does she work hard to achieve her goals and repeatedly put her people’s needs first, but she also possesses the heroic impulse: the desire to strive toward perfection and be the best version of herself she possibly can.