by Alex Biebel from San Diego, California in United States

"There are in fact two things, science and opinion; the former begets knowledge, the latter ignorance." Hippocrates

Medicine has been an essential part of our lives for thousands of years. For the first couple hundred years of medicinal practices, populations and civilizations devoted themselves to gods in hopes that whifs of their graciousness would grant them a gift to survive and allow them to live a peaceful life. Hippocrates was the philosopher to push the change and alter thousands of years of practice benefiting the people. Widely known as the "Father of Western medicine”, Hippocrates is often considered the “...greatest physician of the Greek world” (Downey). Hippocrates challenged beliefs that sought to change and improve people's lives. He was most known for the writings of  Corpus Hippocraticum, a book that contained “...a wealth of information on biomedical methodology and offer one of the first reflective codes of professional ethics.” (Boylan). His great and seeming baffling beliefs showed his want to help himself and others. Moreover, he aimed at elevating medicine in different ways and spread new information to educate and inform. He utilized his widespread popularity to make advancements in medicine by materializing new beliefs and practices, whilst also keeping the business fair and uncorrupt, dubbing him “The Father of Western Medicine.” 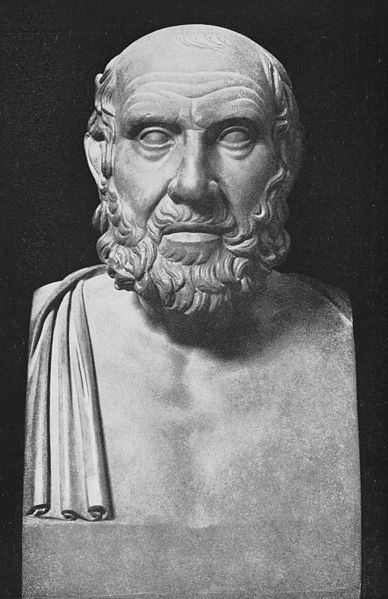 A sculpture of what Hippocrates supposedly looked likeSee page for author [CC BY 4.0 (https://creativecommons.org/licenses/by/4.0)]Hippocrates' new and creative ideas towards improving medicine and living better lives made Hippocrates innovative. One of Hippocrates' ways of improving medicine and living better lives was by making you put in your own work. "The Hippocratic approach to medicine, expressed in the books, emphasized that disease arose from natural causes, not from whims of the gods. Hippocrates insisted on careful observation of medical conditions; the books contain dozens of detailed clinical descriptions of diseases. He recommended as little interference as possible with the body's own ability to heal. Treatment focused on diet, rest, and cleanliness" (“Hippocrates.” World). He showed that if you do simpler practices by yourself, like diets, you can live a happier life without needing to rely on empty hope. Innovativeness is shown here because he was one of the first people around his time to stop believing in a higher power being the result of conflicts, in his case, illnesses. Hippocrates pushed the idea that maybe not everything was caused by the gods, but by simple cases that could be solved logically and with care. He spread this information around allowing vast cities to deal with their own problems. By doing this, he released valuable information and increased his reputation dramatically. "During his travels, he worked as a physician and as a public health official, advising cities on how to combat the problems of plague and disease. He achieved a widespread reputation during his lifetime and was already famous by the time of his death, around 377 BCE, in the city of Larissa, in the Greek region of Thessaly" (Downey).

This shows innovativeness because Hippocrates was able to spread his information across greater distances, allowing other cities and populations to begin developing their own medicines and treatments. Due to these actions, other populations could then add onto the knowledge, allowing even more illnesses to be able to be cured. Because of this, medicine was able to stretch across greater distances and allowed different practices and experimentation to be implemented into the already existing medicinal practices. By introducing new ideas and practices, Hippocrates was able to show his innovativeness. He challenged the popular belief and set to inform and educate thousands of people in hopes that they would be able to live better and happier without the need to look upon a higher power for guidance. 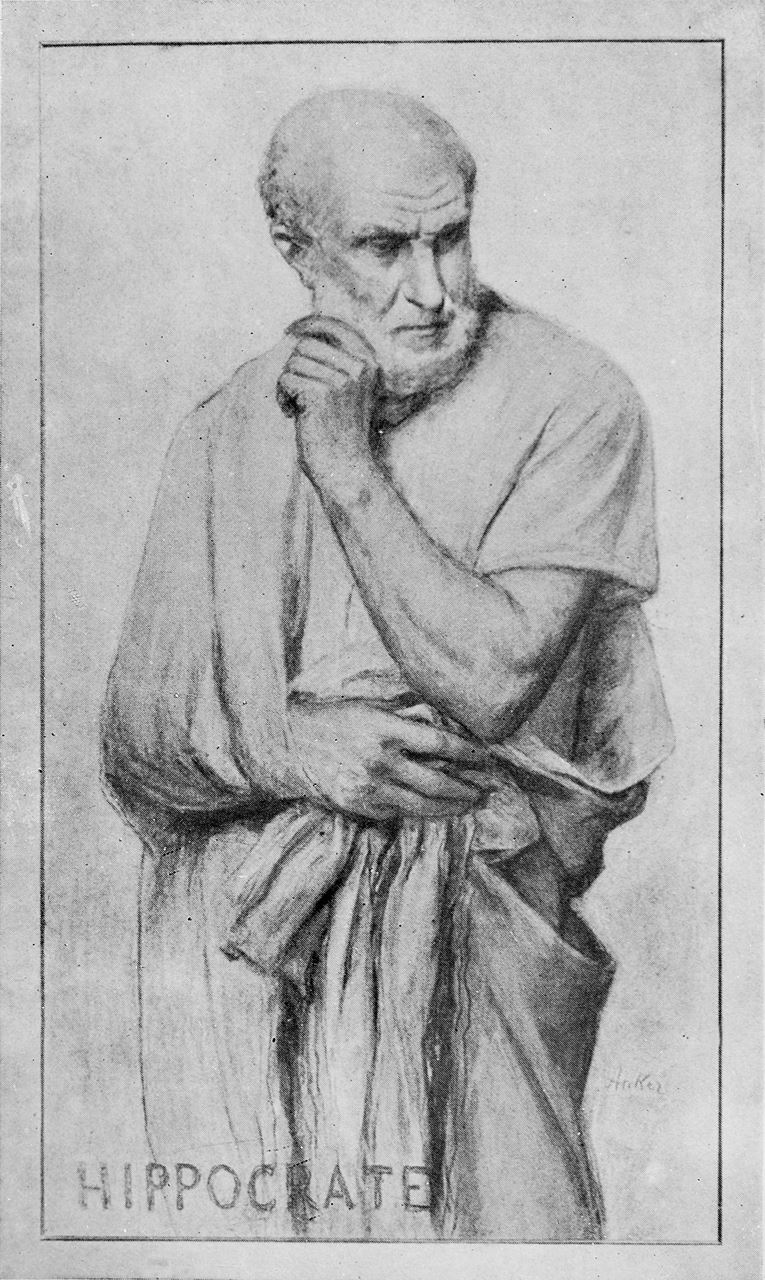 A drawing of HippocratesAlbert Anker [Public domain]Hippocrates' forward thinking about how medicine should practiced compared to current views, made him bold.  He documented these in a collection of books that would soon be the very staple of his success. "Numbering between sixty and seventy separate works, the Hippocratic writings ("Corpus Hippocraticum") cover general medicine, environmental medicine, treatments of illnesses, surgeries, and general health. They provide opinions on general health, theories of disease, remarks about human physiology, and discussions of specific ailments such as epilepsy. ...[they] later illustrate the trend toward clinical observation of patients" (Downey). Hippocrates’ boldness contradicted the views of people and rulers in the past. By doing this, he isolated himself from the population and was willing to take punishment, spreading what he believed to be correct. “Prior to the time of Hippocrates, Greek medicine was heavily influenced by myth and superstition. Diseases were explained as the results of astrological events, or the actions of gods” (Downey). Around Hippocrates time, most doctors look towards to gods and religious practices in hopes of curing a patient; the Corpus Hippocratum was a bold new way of thinking and practicing basic medicinal practices. With Hippocrates introducing the Corpus Hippocratum into the medical field, these beliefs were quickly pushed to the side and new practices were put into effect. It proposed that one to live happier by following simple daily practices like maintaining a diet and following the weather. Due to this, basic illnesses and miserable living became less of an issue not only among doctors, but also the populous. “He set his face against any tendency toward sacerdotalism. He was also opposed to the spirit of trade-unionism in medicine. His concern was with the physician’s duties rather than his ‘rights.’”  (Hippocrates.” Antiqua). Hippocrates shows his boldness here by foreseeing a corrupt and unjust way of business. To prevent this future from happening, Hippocrates took it upon himself to face the sacerdotalism and trade-unionism. He cared more about his patients than the pay and conditions of his co-workers. “It balances between very specific prohibitions such as not administering poison or not having sexual relations with one's patients” (Boylan). From this point on, the “Hippocratic Oath” was put into effect and had hopes of carrying out what Hippocrates wanted for the business and his patients overall. By confronting a corrupt environment before it even existed and introducing a new way of thinking and working that essentially stomped previous religious based practices, shows how Hippocrates is bold enough to face absurd beliefs  for the benefit of the people. He wished only the best and easiest lives that he could offer to anyone. Hippocrates shared his wisdom whilst making sure that his clients were not being scammed or thrown under the bus by an abusable system.

Known almost all over Greece, Hippocrates was popular for his time. He made use of this and was able to spread new ideas and information across great distances quickly. Whilst doing this, he made advancements in the medical business and kept the workforce uncorrupt by making them swear by the Hippocratic Oath. His actions and forward-thinking beliefs earned him the name “Father of Western Medicine.” Hippocrates shared a plethora of innovative ideas across all corners of Greece. These ideas pushed back the heavily practiced religious beliefs, and introduced new ideas that were completely contradictory to previous ones. These innovative ideas led to further development of more logical reasoning and thinking. Later, the Corpus Hippocratium was brought into the medical world. The assortment of knowledge was passed around, introducing the more logical reasonings contrasting to already religious societies, allowing them to move on from mere hope from an unconfirmed source, into advanced and developed treatments. Hippocrates is an inspiration because he genuinely cared for others vastly more than himself. He set aside greed to help another live a fulfilling life as stated, "I will concern myself with the well being of the sick" and "do no harm" (Boylan). If Hippocrates had not been generous and bold enough to release his knowledge into other cities and populations, medicine may not be where it is today. For if the colossus of books had not been shared, some of the simplest diseases may have remained an issue. His willingness to share and inform, allowed thousands of people to develop and include their share of useful information to push the development of one of the most important things in today’s everyday life, medicine. Because of Hippocrates, we have been able to push medicine to the furthest bounds and continue to find new ways to cure diseases and  disorders. With the knowledge of the Corpus Hippocratium, and Hippocrates willingness to share his wisdom, we have achieved unbelievable goals and have done great things for each other. As a result, he has been an idol for thousands of years and made a name for himself within the medical world. For these reasons, Hippocrates is truly an inspiration and one to look up to.