His Afghan mission: to restore lives and limbs

In Afghanistan, a soft-spoken former lawyer has dedicated himself to helping those wounded in war walk a path from despair to hope. Watching that progression, he says, is a “privilege.”

MAY 12, 2020 - KABUL, AFGHANISTAN - When a rocket tore through the roof of Ahmad Zubair’s house in Afghanistan’s Parwan province, the boy lost his right leg – and with it, his family thought, any chance of a decent future. 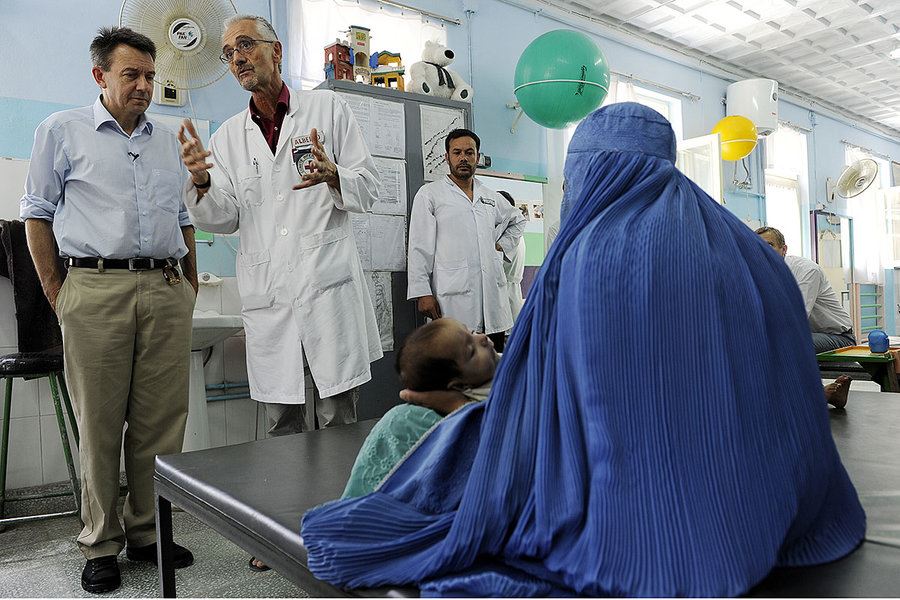 Alberto Cairo (second from left), for decades the head of a Red Cross orthopedic project in Afghanistan, gives a tour to International Committee of the Red Cross President Peter Maurer.Farzana Wahidy/Courtesy of ICRC

That was last September, on election day, north of Kabul. Taliban insurgents had vowed to disrupt the presidential vote, and so the rocket attack added the young boy to the near-endless list of wounded civilians from decades of war in Afghanistan.

But these days the 10-year-old is in Kabul, steadying himself on a newly fitted prosthesis at an orthopedic center run by the International Committee of the Red Cross (ICRC).

“I am so very happy to walk,” says Ahmad, moving forward confidently with his right shoe strapped to the plastic and metal foot.

“It’s too important to have the [prosthetic] leg,” concurs Ahmad’s father, Ghanem Gul Hojat, as he watches his son test the new device. “He is top in school. It’s far from home,” says the father of the 25-minute walk.

Ahmad’s story represents another devastating war casualty in Afghanistan, but also another life transformed for the better by a comprehensive ICRC program that, for 30 years, has been shepherded by Italian physiotherapist Alberto Cairo. 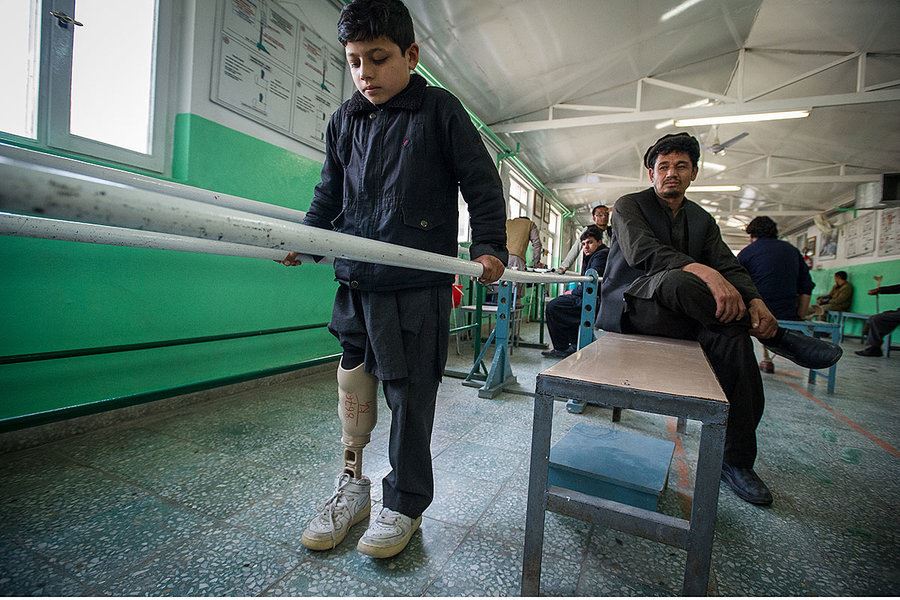 Ahmad Zubair, who lost his leg in a rocket attack that struck his house on election day in September 2019, practices with a new prosthesis beside his father, Ghanem Gul Hojat, as physiotherapists care for victims of war and disease at the ICRC's Orthopedic Center, March 3, 2020, in Kabul, Afghanistan.Scott Peterson/Getty Images/The Christian Science Monitor

Revered by Afghans as “Mr. Alberto,” and respected by colleagues for devoting his life to helping disabled Afghans, Mr. Cairo has overseen an expansion of the ICRC’s work with limb-
fitting and physical rehabilitation to seven orthopedic centers around the country.

Last year alone those centers helped more than 160,000 Afghan patients, including nearly 15,000 new ones – Ahmad among them. Their workshops created some 27,000 artificial limbs, put to use in nearly 350,000 physiotherapy sessions.

At the heart of the program, and its holistic broadening to include home visits, job training, social integration, and even wheelchair sports teams, is a soft-spoken former lawyer who found his calling far from his native Turin, Italy.

Of the tangible progress that has motivated him to help Afghans over the course of multiple wars and social upheavals, Mr. Cairo says, “I have only one word for that: It’s a privilege.” He says he sees despair turn to hope, every day.

“The person who comes the very first time, who has lost one or two legs ... there is no hope at all,” he says. Patients feel their life is over, that they have no chance of finding a job or getting married. “They are people in an awful situation,” he says. 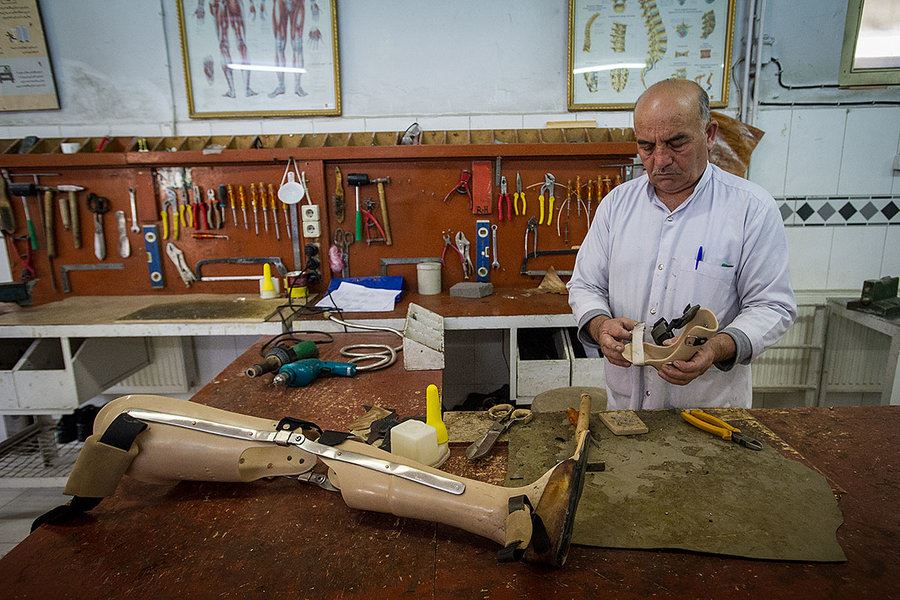 An Afghan orthopedic technician for the International Committee of the Red Cross builds prostheses at the ICRC's Orthopedic Center in Kabul, Afghanistan, March 3, 2020. The Kabul center is one of seven around the country that have provided new limbs, training, and social support under the directorship of Italian physiotherapist Alberto Cairo.Scott Peterson/Getty Images/The Christian Science Monitor

“You can see these kinds of miracles, people that, when you looked at them the very first time, you see them totally lost,” he says. “In front of you, you really see day by day people are growing, people are changing. There is a transformation. It’s fantastic.”

Beyond the sheer numbers, the proof is in the ICRC centers and prosthesis workshops, where the combined staff of 750 are almost exclusively disabled former patients.

“There are some excellent physiotherapists, men and women, some excellent orthopedic technicians, making prosthetics,” says Mr. Cairo. “And I tell you, at the beginning they were looking at me as if I were coming from another planet. Self-esteem was so low. Self-confidence was minus 20. And now look at them, they are there, teaching other people and helping them, and very proud.”

As much of the world responds to the COVID-19 pandemic, Mr. Cairo exemplifies the impact that one individual can have during a lifetime of devotion as a committed humanitarian.

“Even within the institution, [Mr. Cairo] has really become an icon,” says Benjamin Wahren, the ICRC deputy head of delegation in Kabul. Foreign staff are usually rotated frequently in dangerous and grim postings like Afghanistan, Congo, Syria, and Iraq. An internal joke is that Mr. Cairo is still on the longest-ever “first mission.”

“The impact that he as a person has had is in a way much more tangible, at least in terms of humanitarian work, because [for others] a lot of it tends to shift. People shift, programs shift,” says Mr. Wahren. “It’s very, very rare to have a single person building from zero to where it is today, a program like this.”

That program has been built with sustainability in mind. And it has survived setbacks. In 2017 the Spanish ICRC physiotherapist Lorena Enebral Perez was shot dead by one of her own polio patients inside the orthopedic center in Mazar-e-Sharif.

ICRC operations in Afghanistan since 1979 have also weathered dramatic political change, including the Soviet pullout, the civil war of the 1990s, the U.S. ousting of the Taliban in 2001, and the subsequent insurgency, which has at times resulted in the ICRC being targeted and forced to curtail its work..

Through much of it has been Mr. Cairo, who arrived here in 1990 after the Soviet occupation. But the path was circuitous for someone who became captivated by physiotherapy at age 16 during his first visit to a care home, with classmates.

“There was a man helping these elderly people to walk and move around,” recalls Mr. Cairo. “I remember that he was doing very simple things, but very useful, because people that I could never imagine would be able to stand. He was able to help them.”

Mr. Cairo started reading about physiotherapy as a hobby and every so often returned to the care home. He studied law but finally, in his late 20s, asked himself if he wanted to be a lawyer for the rest of his life – or something else.

So he went back to school. His first mission, to southern Sudan for an Italian relief group, ended after three years, when the team was evacuated. He joined the ICRC and was sent to Afghanistan, where he fell in love with the place and its people.

Already by 2008, The New York Times referred to Mr. Cairo as the “most celebrated Western relief official” in the country, and in 2010 he was nominated for the Nobel Peace Prize. Last August he was made an honorary citizen of Afghanistan.

Mr. Cairo now says that his time in the country flies by too quickly, so he just agreed to extend his Afghanistan tour through 2022.

Do any cases stand out to the man credited with helping more than 100,000 Afghans walk again?

Mr. Cairo ponders a moment and mentions a man in his mid-20s who now works as an administrator at the Kabul center but who arrived as a boy.

Ashraf came at the age of 7, he says, paralyzed from the chest down due to shrapnel in his back. “At the very beginning, he was so, so afraid of everything. He could not do anything. He was never, ever, leaving his house without being escorted by one or two people,” he recounts. Ashraf felt he couldn’t even propel his own wheelchair outside.

“It took some time to convince him, and we sent pictures home to teach him,” says Mr. Cairo. Now, on top of his ICRC job, Ashraf studies at university, speaks fluent English, is writing a novel, and recently traveled – insisting on doing so alone – to India and Moscow.

“This is a person who, believe me, was scared to look around; he was so, so afraid,” adds Mr. Cairo, with a hint of pride in his voice. “And now he’s a new person. This is one of the thousands.”