Reflections on the Life and Spirit of Tom Theurkauf

Over the past couple of weeks, I’ve tried to remember the first time Tom and I met. I know it was around seventeen years ago, and I suspect it was in Cheshire, but try as I might I couldn’t come up with anything specific. No occasion. No first handshake. Nothing. And then it occurred to me why I couldn’t remember. At the time we met, we were both totally smitten, each of us head over heels in love with two brilliant, beautiful, talented young women, who happened to be sisters. So as to our first meeting, I have no doubt that Tom would be equally clueless.

The subsequent seventeen years brought many changes to our lives: a couple of moves, new jobs, a bunch of beautiful kids, shared holidays, and lots of wonderful times. But one thing remained constant for both Tom and me: we stayed head over heels in love with those sisters.

That’s how my life entwines with Tom’s. Dwight and Judy’s daughters brought us together. And so my perspective on Tom comes almost entirely through the lens of family. Our most common meeting ground was the Siegel family living room. Except for family weddings or baptisms, I never saw him in a pressed shirt or business suit. So, I didn’t know Tom as one of our country’s most brilliant financial analysts, though last spring the Wall Street Journal praised him as such. Nor did I know him as a guy who got up to catch a train at 5:20 every morning, and put his considerable insight and intellect to work for Keefe, Bruyette and Woods, though that he did, and well enough to be elevated to their Board of Directors.

I knew he excelled in that world. But that’s not primarily how I knew him or how I’ll remember him. I knew him, and grew to love him, in another context. As Robin’s husband. As a father. As an uncle. As a friend. And, it should be noted, as a die-hard Giants fan. And I have to say that to watch Tom watch a Giants game was entertainment in and of itself. Because he didn’t just watch with his eyes, he watched with his whole body. He watched with passion. He’d stand up and cheer. He’d laugh that contagious laugh. He’d moan. His body would contort. Never did he just sit back and watch. He wore that Jim Fassel NFL Giants jacket with pride and joy.

But when it came to passion, pride and joy, nothing, not his triumphs at KBW, not praises sung in the Wall Street Journal, not the New York Giants, nothing could hold a candle to his family. That’s where Tom found his deepest meaning and joy in life. That’s where this incredibly successful investment analyst invested his most sacred energy, care and devotion. In his bride. And in his boys.

He was one of those husbands who tend to get the rest of us husbands in trouble. While many of us get consumed by the daily pressures and challenges of life, or lulled into that dangerous place where relationships somehow find themselves on autopilot, Tom remembered. He remembered that marriages not only need and deserve constant care and nurture; he remembered that marriage is supposed to be fun. This week, Robin wrote down a few thoughts about her husband that I think are best shared verbatim. She writes,

“No woman ever received more flowers.
Tom would bring flowers home from work and they would appear in hotel rooms before I checked in.
We drank lots of champagne, toasting triumphs and sometimes nothing at all.
Once, on a beach in Maine, he brought me diamonds in a brown paper bag.
He taught me how to accept gifts of love with grace.
He held my hand wherever we went.
He taught us how to fill our home with great food and wine, friends and family, and fun and laughter.”

What a legacy, Tom. And what an inspiration, what a wonderful reminder, for us all.

As many of you know, three years after Tom and Robin got married, Robin finished up her bachelor’s degree at Trinity College, here in Hartford. Three boys later, Robin started the arduous seven-year process of earning a Ph.D. in international politics from Yale. Yet soon after defending her dissertation, we heard murmurings from Robin about, maybe, getting a law degree as well. Tom loved to feign exasperation at that idea.

I remember teasing him about it. “So Tom,” I said, “let’s see, she’s got a BA, a Ph.D., now maybe a law degree, and then what? Medical school?” He’d grimace, and roll his eyes and moan, and joke about it being time for her to get a job. But through it all, it was so obvious, so clear how he really felt. No amount of kidding around could, for one second, conceal his beaming pride in Robin, and what she’s accomplished. With his steadfast support, he encouraged her to grow, to expand her intellectual and professional horizons. And that’s a sign of a great and secure love.

Now having said all that, I’m sure Tom wasn’t perfect. And I’m sure that if he were here, Robin would remind him of that. But Tommy, Teddy and Henry, for all of the seventeen years I knew him, your father cherished your mother…he loved her faithfully, completely, passionately, devotedly. And that’s a great, great gift he gave not only to her, but also to you, and really, to us all. Always remember that.

And boys, remember that your Dad loved you with all his heart and soul. When we’d gather at the Siegels', typically on a Sunday afternoon, it was quite a gathering. With all the adults, six kids and two, sometimes three large dogs and several cats all competing for space and attention, things could unravel pretty quickly. And frankly, call it an occupational hazard, but Sunday afternoons are not my highest energy moments. But then Tom would come to the rescue. He’d take the kids outside, and for hours he’d be in the cul-de-sac with the children, his and ours, watching the skateboards go down the driveway, the bikes whiz by, the go-cart, the remote controlled cars of all varieties, the wind-up airplanes and Frisbees. Tom would be out there laughing, and coaching, occasionally refereeing, soothing the skinned knee or bruised ego, and loving every second of it.

And again, I want to borrow from Robin’s words, verbatim. Tom, she writes,

“spent every available moment playing (with the boys).
They fished together. They played basketball.
They made ‘projects’ out of wood and wheels.
They created a garden and an orchard together.
He jumped off the big dock and swam with them in the cold Maine ocean.
He made pancakes or waffles or omelets or French toast for breakfast on weekends.
He baked bread for them.
The boys toppled him with hugs when he came home from work.
He read them stories and tucked them in at night.
(And) he taught them that they were worthy of the total attention
of a very busy man.”

You know, it doesn’t surprise me that Tom never mentioned that Wall Street Journal article. It wasn’t so much humility, I don’t think, as it was the fact that the true center of his life had little to do with bank stocks, and had everything to do with his boys.

The point is, Tom didn’t wait. He didn’t wait until his schedule cleared. He didn’t wait until the boys were older, when, as we like to tell ourselves, “they’d get so much more out of it.” Tom lived fully and richly in the present. And there’s a lesson there for us all. Because out of that generosity of spirit, the gifts Tom gave his boys, the gifts he gave us all, will accompany us and comfort us as we pick up the pieces and move forward in life.

Thank God for that. Thank God for his love. And thank God for Tom’s sense of humor. Even in my sadness, more than once, in thinking about Tom, I’ve found myself laughing. And since it seems that any reflection on Tom’s life would be incomplete without one, let me share with you my favorite Tom story. Actually, it’s a story he told about himself. And though I’m sure I won’t do it justice, here goes. A couple of years ago, Tom had a business trip to San Francisco. As I remember it, he flew out to California, had afternoon meetings, a business dinner, and then retired, exhausted, to his hotel room.

He got ready for bed, set the alarm and was soon in a deep sleep. When the alarm went off, dutiful Tom got up, and even though he felt groggy and under-rested, he shrugged off the jet lag. It was still dark out, but as was his custom, Tom was determined to get in an early morning run. Though his beard seemed a bit lighter than normal, he shaved. Got into his running gear. And hopped on the elevator. He brushed off the strange looks he got as he walked through the lobby, and started jogging down the street.

To his amazement, there were a fair number of people milling about. At this hour of the morning? Then he turned a corner and noticed a long line at a movie theatre. What kind of crazy town is this? he wondered. And then he passed a bank with a large clock flashing the time: it was 11:30 PM. Needless to say, Tom turned around, jogged back to his hotel, and went to bed. “No one has ever seen God,” writes the author of the First Letter of John, but “if we love one another, God lives in us.”

In that truth, may we find consolation and hope. In tribute to him, may we find the wisdom to live and to love fully, and richly, in the present. As we do, may we feel Tom’s presence upon us, within us, beside us. May he feel, in heaven, our love for him. And may God grant each of us the peace that passes all understanding.

Tell others how you remember September 11... 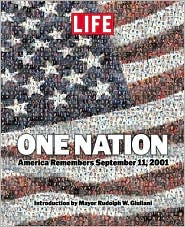 Tom Theurkauf was the beloved husband of Robin and father of Tommy, Teddy and Henry. He was killed on Sept. 11, 2001, when terrorists struck the World Trade Center. He was loved by many and cherished as a hero to his family. What follows is the eulogy for Tom Theurkauf delivered by The Rev. Dean C. Ahlberg September 28, 2001, at St. Patrick & St. Anthony Church in Hartford, Connecticut.