How a search for kindness grew into an anthology of poems 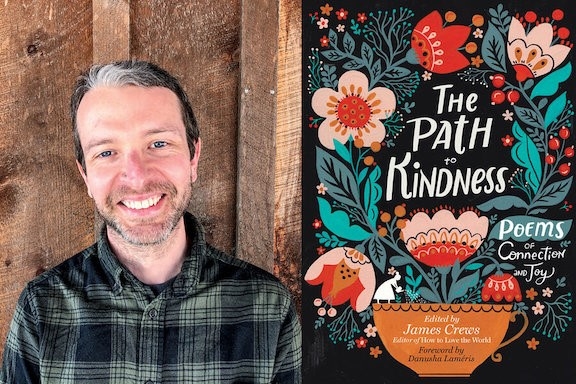 James Crews edited “The Path to Kindness: Poems of Connection and Joy.”Courtesy of Brad Peacock
April 25, 2022

Is kindness a quaint, ineffectual virtue? For poet and editor James Crews, the answer is a resounding no. As he demonstrates throughout “The Path to Kindness: Poems of Connection and Joy,” a follow-up collection to his bestselling anthology “How to Love the World,” kindness can be life-altering. It may also help people find a way forward during the most difficult days.

In a recent Zoom interview, Crews explained that he began planning “The Path to Kindness” during the first full year of the pandemic. Fear of COVID-19 was rampant at that time, and many people viewed anyone outside their household as dangerous.

To counter this negative thinking, Crews made a practice of finding moments of kindness in his daily life. “This was just smiling at someone during a walk in the park or catching a glimmer in someone’s eyes when we were passing each other in the grocery store, just really small moments of connection and acknowledgment and connection to the natural world,” he says. “Out of that practice grew a desire to collect poems that suggest the world could still be a joyful, connected place, even at a time when we were more disconnected and maybe despairing more than we ever had before.”

Over several months, Crews collected pieces for the book intuitively, choosing work he most needed to read or hear.

One poem he was drawn to immediately was “Small Kindnesses,” by Danusha Laméris, which emphasizes the inherent goodness in people and how positive interactions accumulate over hours and days. “Laméris’ poem went viral after the presidential election in 2016,” Crews notes.

Two other poems he chose early on were “Kindness” and “Red Brocade,” by Naomi Shihab Nye.

“‘Kindness’ has been a real touchstone for readers in the past few years and became the most downloaded poem from the Academy of American Poets website during the pandemic,” he says.

“‘Red Brocade’ tells the story of how Arabs used to say, ‘Welcome whoever comes to your door, feed them, and get to know them.’ By the time you’re done doing that, you know the person and you’re so friendly, your differences don’t matter,” he explains.

Crews contacted writers of diverse backgrounds, ages, and locations, both inside and beyond the United States. Some of their poems remind readers to celebrate everyday moments that could easily be overlooked or forgotten. Others, like Susan Musgrave’s “More Than Seeing,” highlight the importance of honoring the interconnectedness of life.

“As I put together this book, I didn’t think specifically about mapping out a path to kindness,” he says. “That title came later. But if we all did the things that are recommended in these poems, we would reach that path. And we would become much happier, more joyful people in the process.”

This is not to suggest that people add more tasks to their to-do list. Poetry is continually surprising, Crews says, and allowing yourself to be surprised and delighted is a way to restore a sense of peace and tranquility.

Once that need has been met, it’s easier to focus on the fact that “every moment we have a choice, a sort of fork in the path that we reach. Are we going to approach someone with love, appreciation, connection, or are we going to turn away from them if we don’t believe in the same way that they do?” he says.

What makes some people feel drained is that they confuse niceness with kindness. Niceness often means never making waves or never confronting people. “Kindness, to me, is much deeper,” he says. “It’s about acknowledging the innate value of people, not reducing them to their beliefs and opinions.”

Crews makes this point in his preface to the collection, where he describes the despondency his husband, Brad, felt after being discharged from the military under the “don’t ask, don’t tell” policy. No one in Brad’s town knew the reason he’d left the Air Force, but small acts of kindness from neighbors, friends, and customers at the organic farm where he worked kept Brad from ending his life – and gave him a new sense of direction.

As people resume more normal lives, Crews hopes “The Path to Kindness” can help readers find their own way to brighter, happier days.

There is a moment before the kingfisher dives,

like the breeze in the low hanging cedar branches

over the river; there is a moment before I name

the kingfisher, the eagle, the ducks when I am not

the observer, I am the dart of light, rush of wings,

the trusting wind; I am grace: an end of living

in awe of things, a beginning of living with them.

From “The Path to Kindness: Poems of Connection and Joy,” Storey Publishing, 2022. Reprinted with permission of the author.