Watershed moment: How Chesapeake Bay turned its H2O around

Sometimes progress comes drip by drip. That’s true in the Chesapeake Bay, where decades of dedication to reducing pollution has helped turn the tide.

AUGUST 15, 2019 - ANNAPOLIS, MARYLAND - It’s a warm summer day by the waterfront in Annapolis, and it couldn’t be busier on the Chesapeake Bay. Countless boats dot the horizon of the 200-mile-long estuary, which spans six states. 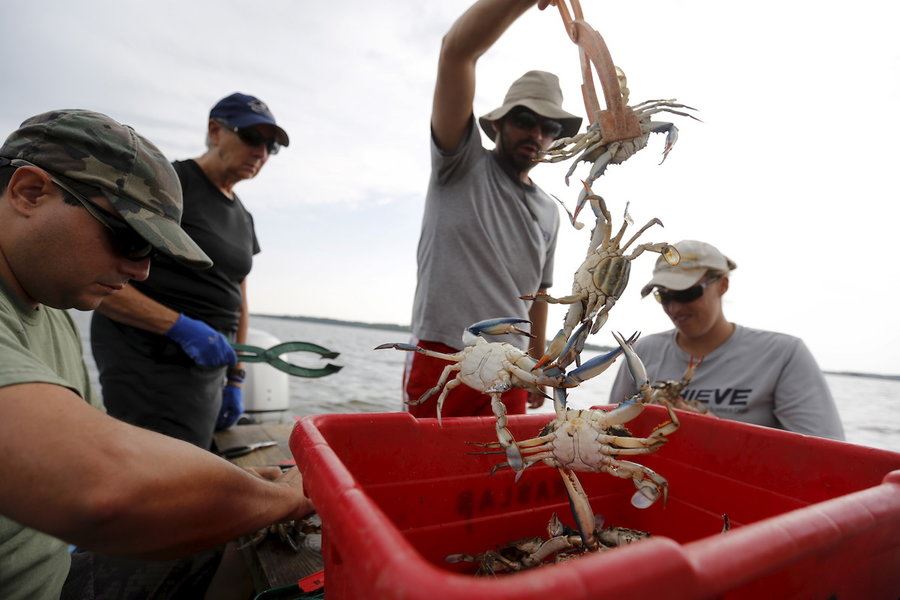 Researchers catch, tag and release crabs back into the Nanticoke River, a tributary of the Chesapeake Bay, near Tyaskin, Maryland, in 2015. An estimated 600 million blue crabs live in the bay, nearly double the number that lived there last year.Jonathan Ernst/Reuters/FileBut the bright scene conceals a difficult history. Since the 1970s, waste runoff and pollution have contaminated the water, threatening ecosystems and economies.

“The bay is home to 18 million people; it’s an economic powerhouse,” says Rachel Felver, a communications director for the Chesapeake Bay Program. Fishing, tourism, and agriculture are among the bay’s key industries, all of which rely on clean water. The commercial seafood industry in Maryland and Virginia alone brings $3.4 billion in sales each year, according to the National Oceanic and Atmospheric Administration.

And the bay is a summer destination for thousands of families. “This is where they have come for years,” Ms. Felver says.

This year, thanks to decades of ongoing cleanup efforts, there is good news for those who depend upon the bay for work or pleasure. The Chesapeake Bay Program – which helps organize a regional partnership among government bodies, nonprofits, and academic institutions working to protect and restore the bay’s watershed – recently released a report indicating improvements in water quality in the 64,000-square-mile system.

That 42% milestone is a 2 percentage point increase over the previous year’s report. The gains are key to supporting healthy aquatic habitats, says Ms. Felver, and one outcome has been an increase in underwater grasses to more than 100,000 acres for the first time in monitoring history.

“Bay grasses are very easily impacted by the weather and by pollution, [and] they are a really good indicator of bay health,” she says.

Additionally, populations of the bay’s famed blue crab have doubled over the past year, to 600 million animals. That’s the highest count in seven years.

“It is amazing that it is doing as well as it is,” says Dr. Ball. “It’s a testament to how well the restoration process is going.”

Both Dr. Ball and Ms. Felver attribute much of the progress to the establishment in 2010 of a total maximum daily load pollution limit by the U.S. Environmental Protection Agency. The TMDL identifies how much nitrogen, phosphorous, and sediment pollution the bay can handle and still support aquatic life, and requires the states in the watershed, as well as the District of Columbia, to take action to reduce levels below that maximum load. “That was a big factor in contributing to the overall health of the bay,” says Ms. Felver.

An emerging challenge for restoration efforts is climate change, particularly with increased rainfall totals and severe storm systems. A State of the Bay report from the nonprofit Chesapeake Bay Foundation found that heavy storms flushed unusually high amounts of pollutants into the estuary in 2018, undoing some progress.

“The weather just makes such a huge difference,” says Dr. Ball. “It is going to be a little bit harder to get the job done.”

Still, he believes that the findings in the Chesapeake Bay Program’s Barometer report indicate an overall trend of improvement. “It speaks to the fact that the bay is becoming more resilient,” he says. “[That’s] a very important thing to build up.”

There is still much work to be done. Ms. Felver notes that the sheer size of the watershed and the number of governments, businesses, and landowners in the system will make progress slow to realize.

There will be a continued focus on tackling agricultural runoff, addressing toxic contaminants, and promoting best management practices for the bay – many of which are part of a plan that will culminate in 2025.

Ms. Felver emphasizes the shared goal of preserving the bay for generations to come.

“It’s a commitment we all have,” says Ms. Felver. “We want clean water. We want to know that we can still pull crabs out of the water and eat them.”