How houses of worship are adjusting to coronavirus concerns

Many religious institutions around the United States supported their congregants by taking to the internet to stream their services this weekend.

MARCH 15, 2020 - ATLANTA - Pastors across the United States delivered sermons to empty (or near empty) pews and online crowds Sunday as houses of worship adjusted to the coronavirus pandemic, with the Vatican indicating that the holiest week on its calendar will look vastly different next month. 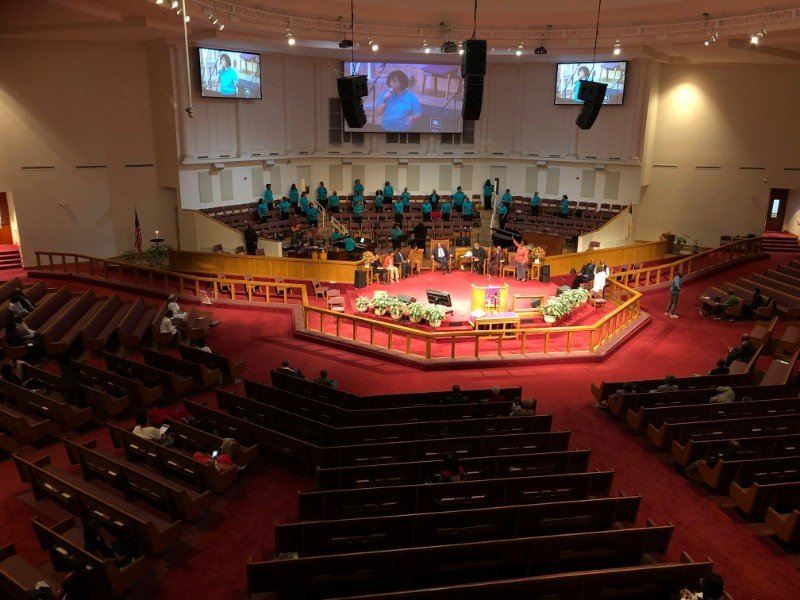 The choir sings at St. Philip African Methodist Episcopal Church in Atlanta on Sunday, March 15, 2020. About 100 people filled a sanctuary that seats more than a thousand.Jeff Amy/Associated Press

While many religious institutions around the country took to the internet to stream their services this week – including one megachurch that President Donald Trump tweeted he was tuning in to – a few tried to take extra precautions while maintaining a semblance of their Sunday routine.

Mr. Trump, who had declared Sunday a special national day of prayer, said he would watch a livestreamed service by Jentezen Franklin, a Georgia-based pastor and long-standing evangelical ally of the president. The annual National Day of Prayer is May 7.

During his sermon, Franklin urged prayers for China and Iran, areas hit particularly hard by the virus. Franklin also sought to acknowledge the fatal toll that coronavirus is already exacting worldwide while encouraging worshippers not to “let the fear flu get you” by falling prey to panic.

Mr. Trump, who tested negative for the coronavirus according to a statement from his personal physician, tweeted that Franklin’s service was “great and beautiful.”

Franklin held his Sunday services exclusively online, as public health experts and state governors urged the cancellation of big gatherings of all kinds to curtail the spread of coronavirus. But a few churches kept their doors open.

A hardy few came to mostly empty churches as pastors faced hard decisions about continuing to hold services, and how to maintain the bonds of a congregation during a public health crisis.

At St. Philip African Methodist Episcopal Church in Atlanta, about 100 people dotted a sanctuary built for thousands. The Rev. William Watley told members that he would follow official directives on whether to have church after Sunday. Georgia Gov. Brian Kemp asked faith groups to consider calling off in-person services last week, a concern underlined by the fact that some of Georgia’s 99 confirmed cases were spread at a church in Cartersville, northwest of Atlanta.

Reverend Watley told people attending the 11 a.m. service that more than 500 people had viewed an earlier one online, even pointing out how people could submit their offering online.

“Our goal is not to frighten anyone, but reduce public gatherings where there is an increased risk of exposure,” Watley told congregants.

There were notes of defiance. Watley, warming to his text from II Chronicles about how the people of Judah won a battle thanks to prayer and faith, preached that he wasn’t about to shut his church’s doors.

“Some of the younger preachers said, ‘You going to have church?’ When you think about some of the mess that all of us have been through, the possibility of coronavirus. ... It’s going to take a more than this to stop us from serving and trusting God. His steadfast love endures!” Watley preached.

Although he quickly added: “You do your part. You wash your hands like you got sense.”

Archie James, a member of the church board at St. Philip, said more people were at church Sunday than he had expected. “We want to squash this thing and get it over with,” said James, a Conyers resident.

Vanessa Parson, another St. Philip member, said the church can help ease fears: “Just keep people believing in the Lord, believing they’re going to be safe, that they don’t have to be afraid.”

The sanctuary was mostly empty at Cross Lanes United Methodist Church in Cross Lanes, West Virginia, the only state without a confirmed case. Senior pastor, the Rev. Krysta Rexrode Wolfe, said people should “give thanks that good news still abounds” and use their unique talents during the coronavirus scare, including offering to share stockpiles of groceries or household supplies with disadvantaged neighbors, reconnecting with family or assisting schools that are seeking extra help.

At St. Michael the Archangel Catholic Church in Glen Allen, Virginia, just outside Richmond, about 150 parishioners attended the 9:15 a.m. Mass, a service that usually draws 600 to 700 people.

Deacon Andrew Ferguson urged parishioners to “honor that distance,” the recommendation to stay at least 6 feet away from each other.

Brook Schurman, a private school teacher, said he wasn’t disappointed by the Mass, but noticed how different it felt with the smaller crowd.

“It is a little sad that people — not just here, but throughout the county and state — are pulling back, isolating more,” he said. “It’s what’s recommended, but the fear behind it is sad.”

Across the United States, religious leaders have taken unprecedented steps to shield their congregations from the coronavirus. Measures have included canceling services and banning large funerals and weddings. A number of Roman Catholic bishops canceled all public worship services for at least two weeks. Other steps, including sharing of the sign of peace with gestures rather than physical contact, have been in place several weeks.

Comparably strong measures are being taken by leaders of their faiths, ranging from rabbis in New Jersey to Episcopal and Methodist bishops in North Carolina. The Church of Jesus Christ of Latter-day Saints halted all worship services and church activities for its 16 million members worldwide. Episcopal churches in the Washington, D.C., area, including the Washington National Cathedral, suspended services.

Many churches closed their sanctuaries but continued - or launched - services online or by phone. Brenthaven Cumberland Presbyterian Church in Brentwood, Tennessee broadcast services on Facebook Live with only a small number of congregation members, staff and the pastor, Kip Rush, at the church.

Initially the discussion was about communion but as members talked it was clear there other concerns. “We also thought about the whole idea that if we can begin to social distance and slow the growth down then maybe we can slow the progression down,” Rush said. He added that while the congregation is small and could have spread out, he did not want to. ”We have some church members, especially older members, who are very faithful, and if one of them had gotten sick, the guilt and the reasoning behind that, we would not have been able to deal with it.”

The coronavirus forced international religious institutions to alter their behavior as well.

In Italy, where the public is severely restricted from leaving their homes, the Vatican announced that Holy Week liturgical celebrations will not be open to the public. Some churches in Italy are being allowed to stay open for individual prayer, but all public Masses are forbidden during lockdown to discourage crowding.

Although Easter, April 12, wasn’t specified in the Vatican statements, it appeared likely that restrictions on large gatherings might well continue in Italy. The Italian government has said it would decide whether measures, now in effect through April 3, would need an extension or tightening.

Spain followed Italy into lockdown mode with churches there adopting measures akin to those begun in Italy a few weeks ago.

The Orthodox Church of Cyprus joined others and called on believers to refrain from attending services for three weeks. Despite an earlier decision not to discourage the faithful from coming to churches, it said in a statement that "it cannot remain indifferent" to the public health crisis.

Find stories of Faith Heroes at MY HERO