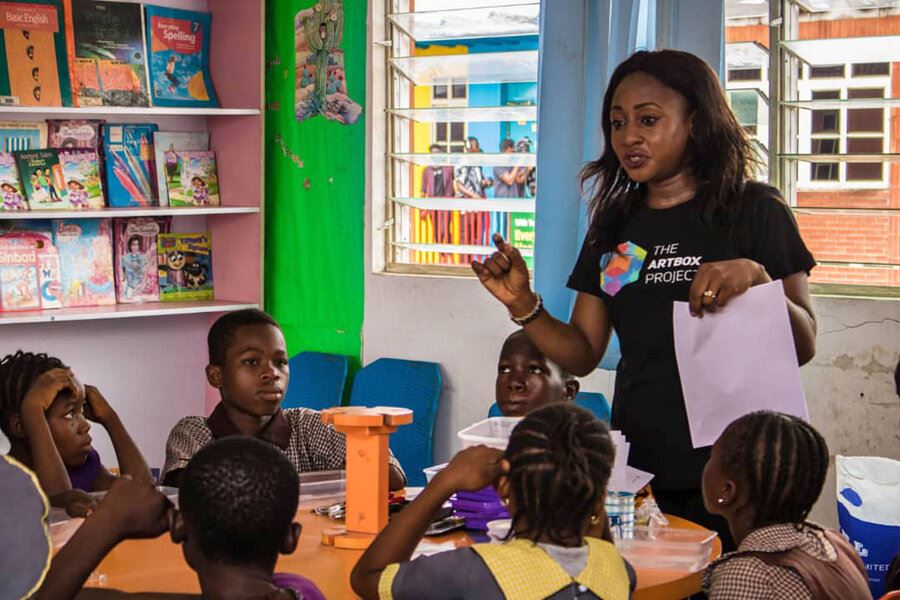 Slum2School volunteers, who come from all walks of life, help coordinate enrichment activities for students.Courtesy of Slum2School

It was one of the few times Otto Orondaam was ever tempted to quit.

The year was 2012 and Mr. Orondaam’s passion project, Slum2School, was off to a bumpy start. Here in Makoko, a low-income neighborhood on the Lagos Lagoon, many fishing families need children to stay home and help with their trade. His brand-new nonprofit aimed to get those kids into school, and for weeks, he’d planned an event, hounding a medical company for mosquito nets to hand out as an incentive.

But just minutes before, the company called – it could not deliver the nets.

“I cried horribly,” the young reformer recalls, laughing, sitting in a well-lit office and sporting a deep-blue turtleneck. “The parents were waiting and this was going to be the highlight of the event, the only thing they could take home, but there were no nets. It was a heartbreaking moment for me.”

But Mr. Orondaam’s upbeat personality soon took over. He quickly called up friends, asking for donations. Two hours later, he zoomed in and out of a market, purchasing and distributing 200 mosquito nets – and ended up enrolling 114 children in existing public primary and high schools that the organization partnered with.

Fast-forward to 2021, and Slum2School says it has directly sponsored almost 2,000 children. Many are still from Makoko – including Hamdalat Hussein’s grandson, Abdulmalik. “What Slum2School is doing for us here is good,” she says in the local Yoruba language, sitting in a one-bedroom home she shares with two grandchildren. “He’s rarely home,” she adds of Abdulmalik – because he heads to the library with friends after school. “I am praying to see him become somebody after he finishes school.”

Nigeria has one of the world’s highest rates of out-of-school children, according to UNICEF – around one-third – although primary education is free and compulsory. Learning during pandemic shutdowns has been especially challenging, since only around half the population has internet access. 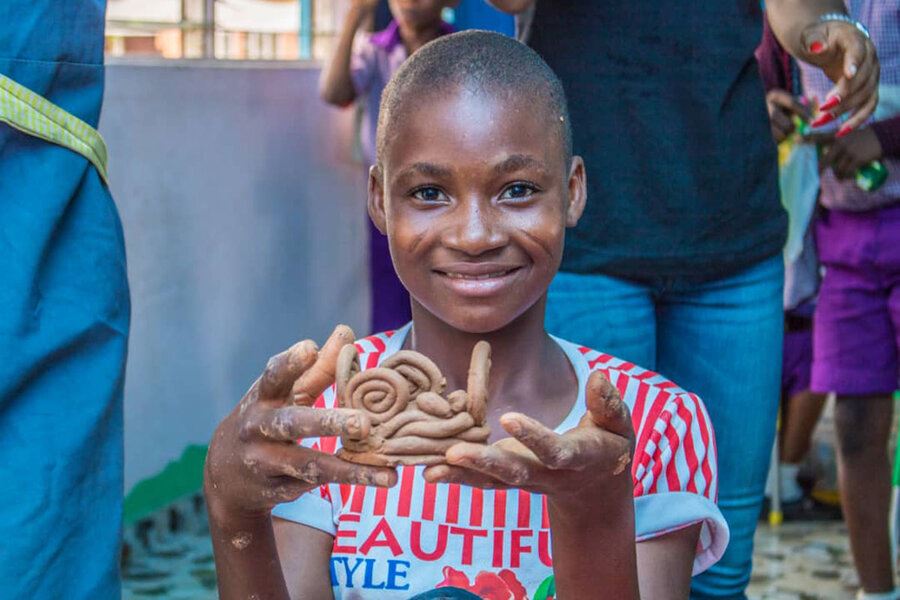 A student participates in a pottery class provided by the Slum2School network.Courtesy of Slum2School

Slum2School, which is funded through donations and grants, works to enroll and keep children in school through advocacy and scholarships: going door to door and asking parents to sign their kids up, reenrolling dropouts, and providing students with scholarships and books. The organization works closely with the Lagos state government to “adopt” public schools. And when the pandemic struck, Slum2School launched a virtual class for high schoolers, after distributing hundreds of tablets.

“I was able to teach myself graphics design and many things like how to make logos and flyers,” says Habeebat Olatunde. Her siblings had skipped around her, fascinated, as she joined hundreds of children in class from their home in Iwaya, another low-income neighborhood bordering Makoko. Now in her final year of high school, Habeebat says she wants to be a human rights lawyer and fight for vulnerable teenage girls. “Teenagers like me, I see them being raped and no one fights for the girl for justice, so I have to do it when I grow up.”

Most dropouts leave school as adolescents, Mr. Orondaam says, and a big factor is high teenage pregnancy rates. Forty percent of girls in Iwaya have been pregnant by age 19, according to a report from the Nigerian nonprofit Action Health.

On a recent afternoon, Mr. Orondaam sat in Slum2School’s headquarters in the upscale Lekki area of Lagos, with outer walls shaped like colorful crayons. He flicked through old photos and chuckled at one of himself, thin and sunburned – one of the first times he went to Makoko, standing beside smiling parents holding nets, with the neighborhood’s wooden shacks as a backdrop.

Growing up in Port Harcourt, a city in southern Nigeria, Mr. Orondaam studied to be a doctor but pivoted to social work, influenced by his parents. His father was the first doctor from his village and would offer free services. His mother was basically “everyone’s mother,” he says. “Our classmates would not have sandals, and my mum would come and take yours and give them. The things I picked up from that was devotion to service, serving with your heart not because it is a job but because it is a responsibility you owe your society.”

He first encountered Makoko through a documentary. The area, a poster child for urban poverty in the developing world, had been largely covered in international media in a way that Mr. Orondaam found unflattering. He felt compelled to visit while completing his National Youth Service Corps in Lagos – a mandatory one-year program for Nigerian university graduates.

“It was the first time I was seeing that kind of community,” Mr. Orondaam remembers. “There were kids there who had never been in school and had no plans to go. I loved the energy. I knew they were happy, but I thought, ‘You can be happier with education; if you have an education, you can make better choices.’”

He resigned from his stifling bank job and started weekly visits to Makoko, updating friends via a blog. When he came up with the idea to send 100 children to school, they supported him through donations, and often came with him on visits.

Today, the Slum2School volunteer network is thousands strong. Some help with door-to-door checks, convincing parents to put their kids in school. Others organize events, or work in anything from communications to mentorship and technology.

From Lagos’ Third Mainland Bridge, the whole of Makoko, the floating fishing community, spreads out below. The overcrowded area has been inhabited by migrants from neighboring Benin for decades. As land ran out, people moved onto the water.

Tightly packed wooden homes on stilts fan out on the dark, murky lagoon for miles, and canoes slip in between them. Onshore, children kick around a football during school hours while others smoke fish.

In 2011, on one of Mr. Orondaam’s first visits, Tope Iroko, a high school dropout, watched him struggle to tell community members about his project in English, a language few understood. Mr. Iroko offered to translate. Now Slum2School’s community officer, Mr. Iroko says the past 10-plus years have brought change. 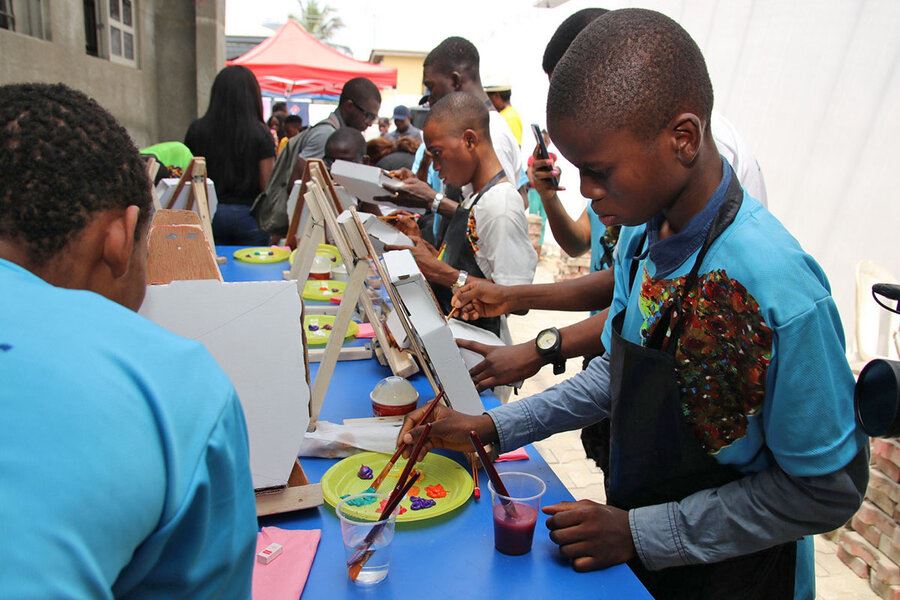 Children attend a painting workshop in 2020, before the pandemic.Courtesy of Slum2School

“Before, there used to be fighting every time because boys had no education and no employment,” Mr. Iroko explains. Today, Slum2School has engaged many young men as community volunteers.

Sunday Jlado, 26, is the first in the network to finish university. He started volunteering in 2013 after costs forced him to discontinue school. With Mr. Orondaam’s encouragement, he sat and passed college exams. The network helped fund his studies, and he is now looking to interview for a role in the organization.

“I feel privileged to be the first graduate,” Mr. Jlado tells the Monitor in a phone call. “I’ve had many challenges, but joining has helped me overcome them.”

The work being done by organizations like Slum2School in Lagos’ slums is “priceless,” says Betty Abah, founder of CEE-HOPE, a nonprofit that provides vulnerable children with mentorship and skills training. “But due to the huge population and enormity of the poverty-related issues, these efforts are still a far cry from solving the problems.”

Back in Makoko, Abdulmalik often helps his grandmother sell fish, juggling that with school. Thin and soft-spoken, Abdulmalik says he was once sorely shy, but has gained confidence through the network’s mentorship classes. During one class, he encountered renowned Lagos architect Jacqueline Aki. Now, he’s sure he’ll design big buildings in the city one day.

“I’m here for a purpose,” Abdulmalik says, hanging out with peers in the Makoko center. “I was brought up in Makoko to solve a problem.”

Editor's note: This story has been updated to more accurately describe CEE-HOPE.