How to help Ukraine? A sampling of charitable efforts.

Dozens of charitable groups are feeding, sheltering, and assisting those in Ukraine and the more than 3 million people who have fled the war. Here are a few of those organizations helping out. 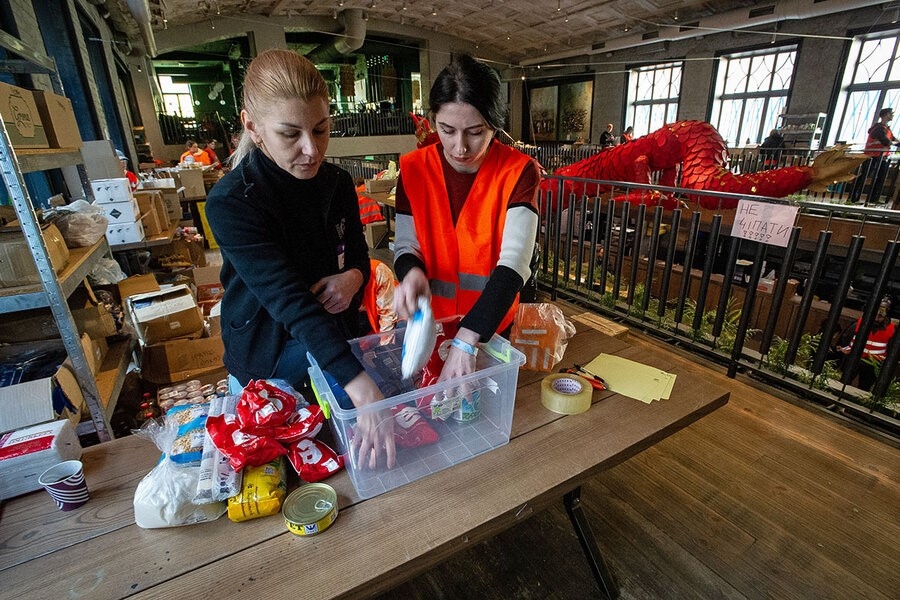 Ukrainian volunteers sort and package donations at the Odessa Food Market before they are distributed to people and civil defense units in expectation of a Russian military assault, in Odessa, Ukraine, March 4, 2022.Scott Peterson/Getty Images/The Christian Science Monitor

As the battle for Ukraine continues, readers have asked for suggestions on how they might help. We’ve compiled a list of just a few of the many organizations working in and around Ukraine, providing food, housing, and other forms of assistance.

This nonprofit was created after the 2010 earthquake in Haiti. Today, the group deploys wherever there is disaster, from Uganda to the U.S.-Mexico border to California, where they feed those displaced by the state’s raging wildfires, as the Monitor reported. World Central Kitchen and its partners are cooking meals for Ukrainian war refugees and says it’s supplying 55 cities in and around Ukraine.

Tens of thousands of people have booked Airbnb rooms or homes in major Ukrainian cities, such as Kyiv, without any intention of staying there. Since Airbnb transfers payments within 24 hours of check in, this is seen as a quick way to get cash directly into the hands of beleaguered Ukrainians. Separately, the online housing rental company is offering free, short-term housing to up to 100,000 refugees fleeing Ukraine via its nonprofit initiative Airbnb.org. And as the Monitor reported, the new app Ukraine Take Shelter connects Ukrainian refugees with people around the world ready to house them.

The global animal welfare organization has an animal rescue fund that responds to crises worldwide, and is now helping the Ukrainian people and the animals in their care. Humane Society International is currently working with the Romanian Red Cross to get pet food and veterinary supplies into Ukraine. But the group warns that as the attacks on Ukraine continue, getting help to those within the country “is likely to become more problematic.”

As the name suggests, this nonprofit group has donated 6 million meals in the past two years. But like many charitable groups, End Hunger New England is also helping Ukrainians. The goal: 1 million meals sent to Ukrainians by May, as the Monitor reported.

Started during the aftermath of World War I, Save the Children has set up a relief fund specifically for Ukraine to help provide children and families with immediate aid, such as food, water, hygiene kits, psychosocial support, and cash.

Started after World War II as a way to distribute surplus U.S. Army rations, CARE does charitable work worldwide. It, too, has set up a Ukraine crisis fund intended to help families – especially women and girls – fleeing violence in Ukraine by providing food, water, and hygiene kits.

The Monitor doesn’t endorse specific charitable organizations and recommends that you investigate each group before making a donation. These three organizations provide evaluations of registered 501(c)(3) nonprofits in the United States and may offer suggestions of other nonprofit groups working in Ukraine.