Something more than gold: How US gymnasts earned silver

JULY 28, 2021 - TOKYO - After a skittish performance at qualifiers Sunday night, Simone Biles thought that when she finished competing that night, she would stop feeling judged.

The global face of the Olympic Games, Ms. Biles continued to feel like the world was watching her even after she received her final score and left the arena. So the next day, she let the world know how that felt. 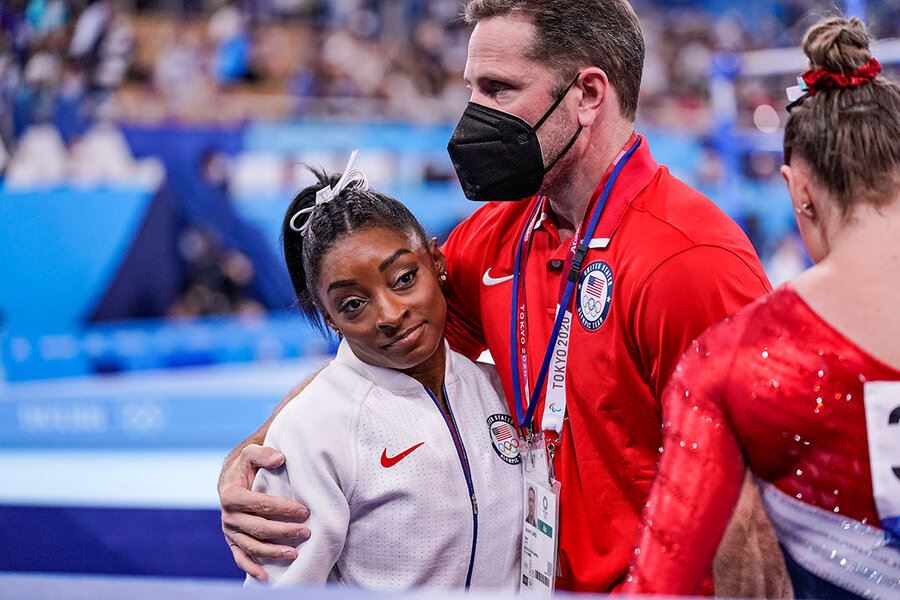 Coach Laurent Landi embraces Simone Bikes after she exited the team final at the Summer Olympics in Tokyo July 27, 2021. After she withdrew, the U.S. women’s team earned silver, while athletes from the Russian Olympic Committee earned gold.Gregory Bull/AP

“I truly do feel like I have the weight of the world on my shoulders at times,” the gymnast posted to 5 million followers on Instagram. “I know I brush it off and make it seem like pressure doesn’t affect me but damn, sometimes it’s hard.”

A night later, at Tuesday’s team all-around final, she decided that weight was too much to bear.

On her first apparatus, Ms. Biles ran down the mat intending to execute a 2.5 twist Amanar vault, but faltered midair and hastily landed, a twist short. Walking to her coaches, and then toward the training room, she decided she wasn’t in a place to compete.

Ms. Biles withdrew – and then did the same with Thursday’s individual all-around final, citing the need to protect her physical and mental health.

Thrust suddenly into events they didn’t warm up for, or even plan to compete in on Tuesday, her three teammates rallied for a silver medal, behind an exacting, consistent Russian Olympic Committee (ROC) squad. For a U.S. group that dominated the international circuit for years approaching Tokyo, anything lower than gold was sure to disappoint expectations. But the U.S. women’s team accepted the cost. If the price of a teammate’s well-being was a gold medal, they would pay it.

Athletes often say there’s more to the Games than winning the gold, but there are few chances to prove they mean it. Tuesday’s final was a rare – perhaps unique – moment where a team under enormous pressure to succeed had a chance to prioritize something more personal, and did. In the process, the U.S. women’s gymnastics team may have redefined success at the Olympics and set a new standard for supporting a teammate.

“We were telling [Ms. Biles], look, this is for you, this is for yourself,” said teammate Jordan Chiles. “You shouldn’t put yourself in such a high-expectation [environment] because you don’t need to carry that much on you.”

At the team qualifiers on Sunday, the group was uncharacteristically imprecise. Ms. Biles stepped out of bounds during the floor routine and off the mat while landing her vault. Ms. Chiles fell off the balance beam and then fumbled her dismount. At the end of the night, a stunned U.S. placed second, behind the ROC. 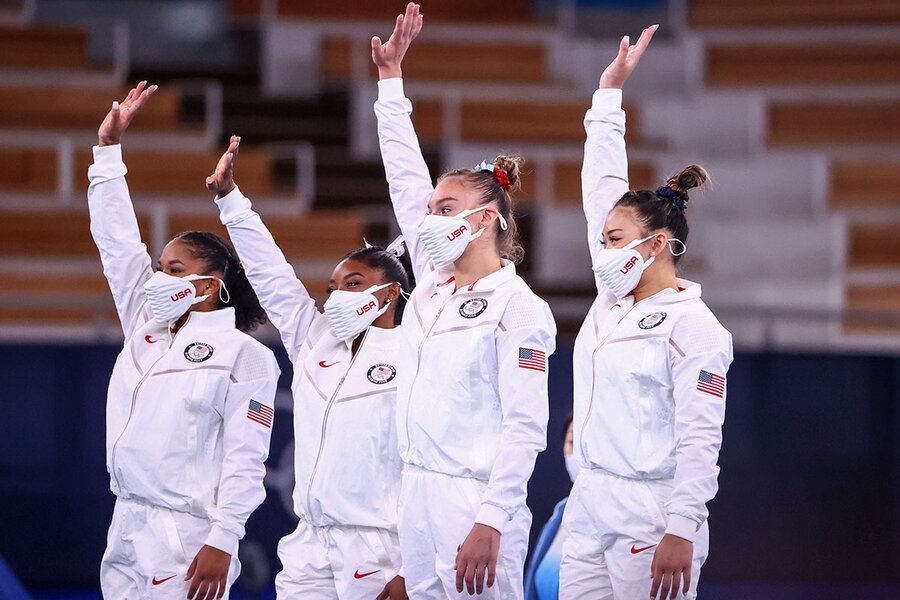 Team USA’s high-performance coordinator Tom Forster ascribed the performance to nerves. While the U.S. team had won world championships, all of its current members except for Ms. Biles are in their first Olympics. Sometimes athletes just need to adjust to the stage.

“This might be a great awakening for us,” he said on Sunday, “and we’ll take advantage of it.”

But following Ms. Biles’ first vault at the team final, it was clear there was more at work than nerves. Ms. Biles performs with bravura, especially on this apparatus – where, in May, she became the first woman to attempt a Yurchenko double pike in competition.

So when Ms. Biles abandoned a routine skill midair and stumbled through her landing, silent alarms began ringing, for her and her team.

“After that vault I was like, I’m not in the right headspace,” said Ms. Biles. If she were to continue at that point, she felt she would either injure herself or cost the team a medal. She spoke to her coaches, who initially encouraged her to keep going, and told them she needed to withdraw.

In the meantime, her teammates didn’t know what was happening. “We were all so stressed,” said Sunisa Lee, who had placed third overall in the Sunday qualifiers. “We honestly didn’t know what to do in that moment.”

At the end of the warmup period between events, Ms. Biles reentered the arena, huddled with her team, and told them the news – which almost certainly meant the U.S. would struggle to win gold. Ms. Biles is the most decorated gymnast of all time, and even on off days her scores rank near the top of the leaderboard.

“When we were all standing there together, I was like, don’t even focus on the scoreboard because it’s not even important right now,” said Ms. Lee. “We lost a teammate, so we just really needed to come together as a team.”

Ms. Biles put on a tracksuit, and Ms. Chiles, who had only planned to compete in two events on Tuesday, put on her grips for the uneven bars.

“They were definitely some big shoes that I had to fill,” said Ms. Chiles.

What proceeded was an impressive display of grace under pressure. In the qualifying round, each of a team’s four members competes on each apparatus, with the lowest score deducted. In finals, the team selects three members for each event, and every score counts.

Suddenly without its leader and highest scorer, the team held composure. Ms. Lee scored one of the highest uneven bar routines of the Tokyo Olympics. Grace McCallum shook off her warmup nerves on the balance beam and held steady. Until the last apparatus, when Ms. Chiles fell during a landing on floor, the team was contending for gold.

“I am proud for everybody stepping up,” said Ms. McCallum. “It is really hard to lose the best in the world, and we definitely felt more stressed. But I am proud of how we did.”

Until Tuesday, said Ms. Lee, Ms. Biles had carried them to the Olympics – and even as teammates, the “Greatest of All Time” is still her idol. When Ms. Chiles wanted to give up gymnastics four years ago, Ms. Biles helped her find a healthier approach to the sport.

Talented as the other members are, none of them attract Ms. Biles’ level of attention or scrutiny. None of them felt the same burden of defending an Olympic gold medal, or single-handedly representing not only a team or a sport or a country, but also the entire Olympics. None of them were on Team USA when team doctor Larry Nassar’s sexual abuse was exposed, leading to a period of turmoil and high turnover in the organization.

But when their teammate withdrew, the pressure changed. The weight of expectations shifted to their shoulders. They had to lead their leader.

While speaking afterward, fenced off from a swarm of eager reporters, Ms. Biles began to cry.

“I know that this Olympic Games, I wanted it to be for myself,” she continued. “I came here and I felt like I was still doing it for other people. So that just hurts my heart that doing what I love has been kind of taken away from me.”

While she spoke her teammates huddled around her and gave her a hug. It was OK, they told her throughout the night, and into the press conference afterward. She was part of the team, and a team stands together.