How do you feed an island? Try World Central Kitchen.

This nonprofit has jumped in with immediate food relief. But it also eyes a larger goal: rebuilding food resilience, so Bahamians affected by the hurricane can cook in their own homes in one more step toward recovery.

NOVEMBER 27, 2019 - MARSH HARBOUR, BAHAMAS - In a makeshift kitchen – set up under a white tent in a parking lot – three chefs and another dozen volunteers and local hires are making lunch for those in need. But this is no soup kitchen. The crew is creating a fresh red curry beef for everyone remaining on this Bahamian island after Category 5 Hurricane Dorian struck here Sept. 1, sweeping homes out to sea, crushing others, and cutting up electricity lines and pipes that still aren’t functioning two months later. 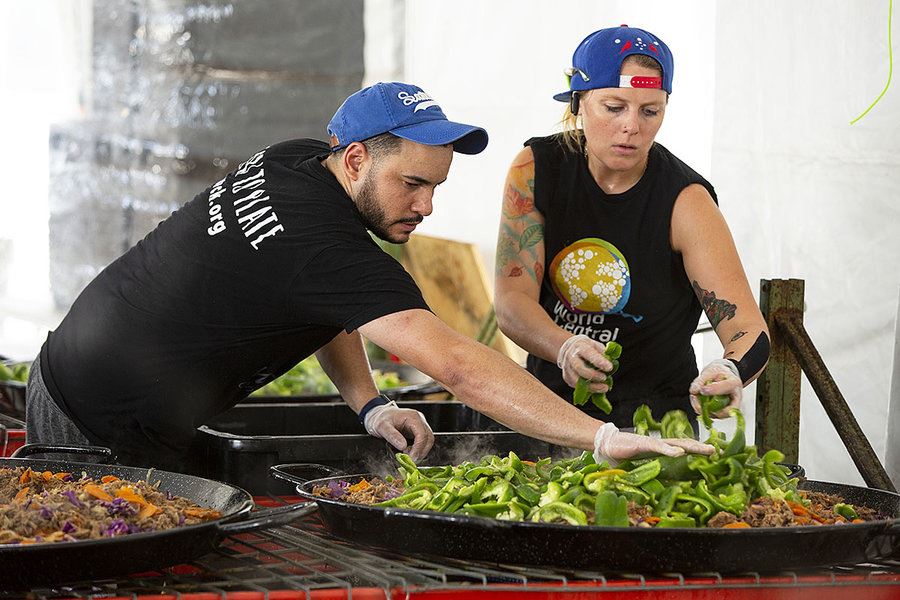 Chefs with the nonprofit World Central Kitchen adds green peppers to a hot lunch they are preparing for people affected by hurricane Dorian in Grand Abaco Island, Bahamas, Nov. 6, 2019. Most people on the island lost everything – homes, cars, and belongings. The nonprofit is feeding almost everyone on the island, more than 5000 people, a hot lunch and dinner.Melanie Stetson Freemman/Staff.“Fire’s on,” yells Brian Myers, a former Arabic linguist in the U.S. military. He was working as a pastry chef in Oregon when Dorian hit the Abaco Islands and took up the call from World Central Kitchen, the humanitarian nonprofit where cooks become disaster relief workers and food assistance goes well beyond dried food rations and packaged meal kits.

Mr. Myers picks up a giant silver paddle and oversees the stirring of rice, which he calls “pushing,” all 120 pounds of it simmering in a giant paella pan. Another six are stewing beef, curry paste, fresh purple cabbage, diced carrots, squash, and wedges of green pepper. By the time they are done, this location will have fed lunch to 5,674 people spanning about 100 miles, some of them remote cays.

“There is no one we aren’t reaching, to be blunt,” says Sam Bloch, the director of field operations, who arrived on this island the day after the hurricane in a helicopter with World Central Kitchen founder and celebrity chef José Andrés. Since then, the group has prepared more than 2 million meals across the Bahamas, delivering them to central hubs like clinics or damaged schools. Food is brought by car into communities where residents don’t have transportation – driver Shirley Dorsett calls out “manje cho,” Creole for hot food, in the many Haitian immigrant communities that dot the island – and via speedboat to reach the archipelago’s cays.

The staff starts at 6 a.m. and lunch is served around noon. And then they start all over again – for dinner.

In the wake of the worst storm to hit the Bahamas, there is nowhere to eat. Some people have canned or dried goods, but they don’t have stoves, or enough propane to power them. The first supermarket just reopened Nov. 7 – but without jobs for two months, many lack the cash to buy groceries. There are no restaurants. There is the Haitian man who barbecues chicken at night, and the other man who dives by day and makes conch salad from a perch on a stone wall off the turquoise waters, a glimmer of what life in Marsh Harbour used to look like. For the most part, there is just World Central Kitchen. 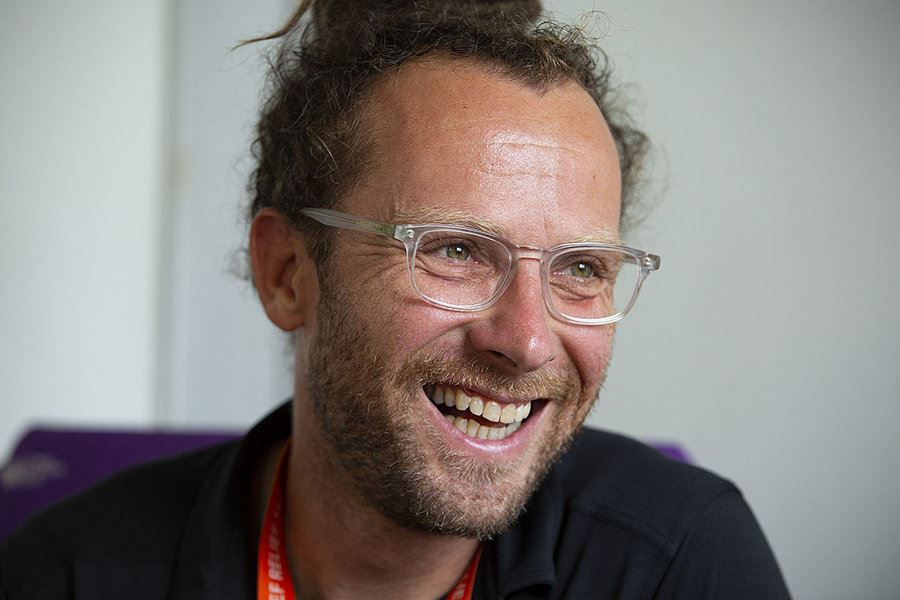 Sam Bloch, director of field operations for World Central Kitchen, talks about the logistics of feeding thousands of people for months.Melanie Stetson Freeman/StaffThe storm left an estimated 70,000 people homeless in the two northern islands hit, the Abacos and Grand Bahama. About half of all standing structures were damaged or destroyed. “This is something we’ve never experienced before. It’s not like where someone has a home, and everyone else can come to that home,” says local Diane Russell, who oversees paper inventory for World Central Kitchen. “There is nowhere to go.”

Even those with the means to cook, or fly in their own food, eat with World Central Kitchen because it allows them to focus on other needs, like clean-up, rebuilding, and grieving.

Anyone is welcome. On a recent day at the Central Abaco Primary School, residents are joined by military, police, and relief workers. “They don’t have to do this, but they care enough about the people to do this for us,” says Monique Green, who is waiting in line for lunch and says she lost everything, “except my car and my life, thanks to God.”

The World Central Kitchen, funded by donors, foundations, and businesses, was created amid the destruction of the 2010 earthquake in Haiti and became a major player in disaster relief after Hurricane Maria in Puerto Rico. Many of those working in the Bahamas today met one another there. Today the group deploys wherever there is disaster, from Uganda to the U.S.-Mexico border to California, where they feed those displaced by the state’s raging wildfires.

Here, where Dorian killed 67 and left hundreds missing, the group mobilized 30 vehicles, five helicopters, two seaplanes, a 220-foot ship, an amphibious vehicle, and four speedboats, often partnering with other organizations for transport, distribution, and kitchen help. Supply chains have been destroyed, one of several logistical challenges they face daily. “Nothing is working the way it should – like have you ever thought about what the word windshieldmeans?” says Mr. Bloch. “No, you don’t until you get in a car with no windshield. Oh, I get it. It’s a wind shield.”

Food with a vision

Each of their meals is analyzed by an in-house nutritionist, but designed with a chef’s perspective, creating dignified, healthy food that makes people feel, essentially, human. “We usually try to put beans into almost every rice dish. But today we are making a nice red curry, so we want that contrast of color so we want some nice pretty white rice with that red curry over the top,” says Mr. Myers. They quickly learned about sòs, citrusy sauces favored by the Haitian community that migrated here for work, so they add citrus fruits where they can to make “comfort food.”

The group’s overarching goal is food resiliency, being mindful that they don’t create dependence. In Abaco that means training local staff, handing out vouchers for propane, and eventually setting up a farmers market, where people can obtain their own fresh produce or bread. Ms. Green, in the lineup, says for as much as she is grateful for the food, she is eager to cook her own.

“The people of the Bahamas are very resilient, and definitely it’s been amazing to see the evolution of being here from the beginning,” says Mr. Bloch, “when people were just in shock, to then ‘Brush off, roll up your sleeves, and get to work.’”

As Abaco slowly begins to rebuild, World Central Kitchen braces for the rhythm to intensify. After a crush in the beginning, meal prep waned after mass evacuations, and now is steadily increasing as people return home. And the kitchen keeps humming. Bob Marley’s “Get Up, Stand Up” plays on the speakers.

“You push hard for a period of four months, and you go home. You work yourself out of a job, and that’s the goal,” says Mr. Myers, who after a 24-year stint in the military became a chef and now a relief chief. “This organization comes in with a good plan. They come in fast, and they leave with an exit plan. It’s not, ‘Ok we’re done, thanks, bye.’ And when they make the [next] call and say, ‘When can you be there?’ I say ‘Tomorrow. I will figure it out.’”