‘I put the students first’: A public school librarian on book bans 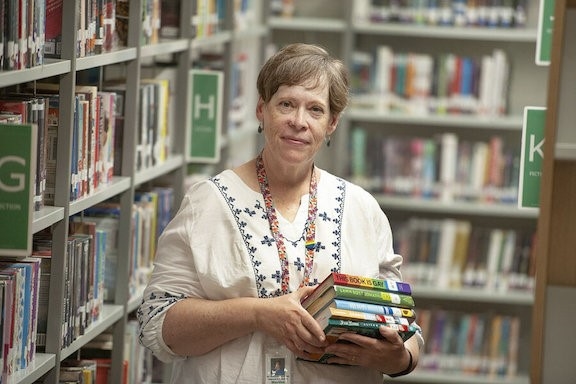 Martha Hickson holds five LGBTQ-themed books that she helped defend against calls for removal from the North Hunterdon High School library in Annandale, New Jersey, over the past year. “I put the students first and foremost, but of course parents are a part of the equation,” says the school librarian. Courtesy of Rutgers University/Nick Romanenko
Calls to ban books – from classrooms and library stacks – are on the rise, but they aren’t new. Direct dialogue with parents often resolves book concerns, though they’ve been rare, says librarian Martha Hickson, in her 18th year at North Hunterdon High School in Annandale, New Jersey.

What is new: having to defend not just titles for teens, but herself.

Backlash began at a school board meeting last September during Banned Books Week. A local parent claimed the school library’s inclusion of certain books with sexual references was an effort to “groom” students as potential victims of pedophilia. Next, says Ms. Hickson, came hate mail – an example of the scrutiny faced by school staff countrywide in this culture war.

“I have never seen anything like this in my lifetime, with the exception of maybe in history books,” says the librarian, who helped defend five LGBTQ-themed books from removal. “I’m thinking of the Nazi era, or perhaps the McCarthy era with the Red Scare.”

The Monitor spoke with Ms. Hickson, who received a 2020 American Association of School Librarians’ Intellectual Freedom Award, about her responsibility to young readers. The conversation has been condensed and lightly edited for clarity.

How do you define your duty to students?

My duty to students is essentially to enable them to go out into the world to be effective and discerning users of information, and lifelong learners.

How do you define your duty to parents?

I put the students first and foremost, but of course parents are a part of the equation. My duty to parents is to work with them within the guidelines established by the school system and the board. There are policies and rules in place to help me and the parents work together when there is a concern about a book. That process should begin with a conversation with the librarian and/or the principal. In that conversation, my obligation is to first listen, understand what the concern is, and then to help the parent understand how and why the book is in the library, and then to remind the parent that library materials are there for voluntary inquiry.

Nobody must read a library book. If the book in question is not compatible with the parent or student’s reading preferences, let’s choose another.

Calls to ban award-winning books like “Gender Queer: A Memoir” – featuring LGBTQ protagonists as well as sexually explicit content – have included allegations of pornography. How do you reconcile perceptions of harm with your embrace of intellectual freedom?

Perceptions of harm have to also come in contact with reality ... and legal precedent. There is the Miller rule regarding obscenity – and this is one of the things that is getting overlooked repeatedly. This is the Supreme Court guideline, and the major element there is viewing the work as a whole. Is the work as a whole patently vulgar?

In the example of “Gender Queer,” time and time again, including in my own district, the decision has been that no, it is not. In fact, a book such as this contains value for helping individuals who are questioning gender identity or sexuality understand that there are others in the world like them.

Have you personally seen the value of the types of books now being challenged in an individual student’s life?

Absolutely. Every day. One of the books that was challenged in my library is a book called “This Book Is Gay” by Juno Dawson. It’s essentially a handbook for kids who are either questioning or just understanding their sexual identity. It covers all the things that a young person might have questions about in that situation – things about dating, coming out, bullying, religion, and, yes, sex.

The cover of this book is bright, broad rainbow stripes ... [and] says “This Book Is Gay.” Can you imagine being 14 years old and having the backbone and the courage to take that book off the shelf, walk through the library with it, hand it to me – a 62-year-old woman, whom you barely know, perhaps – and check it out? That’s an act of courage and trust. I respect so greatly – and value so greatly – that a teenager trusts me enough to hand me that book and know that they’re safe in my hands. That kind of transaction happens every day in our library.

I have received a number of emails from former students – kids who weren’t out at the time that they were in high school – who’ve thanked me for having a library that was a safe space for them, where they saw themselves represented on the shelves. 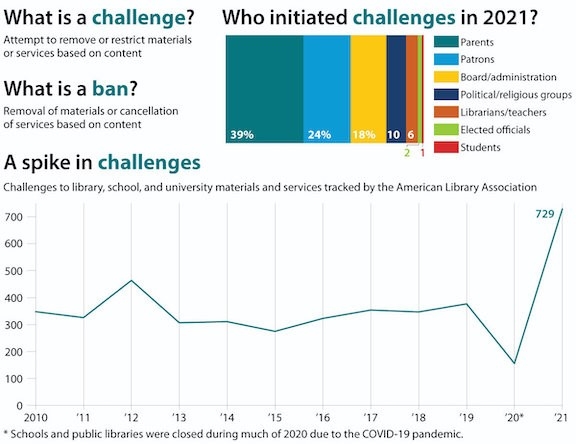 Is there anything in the coverage of book bans – or school librarians more generally – that gets left out of the news?

I think one of the things that gets left out of the news a lot of times is the voice of the other side ... the parents who support the right to read and the voices of librarians. What’s been happening is, because the language and the tactics of the book banners are so outrageous, that grabs eyes and attention. It’s practically clickbait, so a lot of the coverage gives a lot of space to those voices. ... At least in my community, my experience is those voices are very few, but very loud.

What, if anything, gives you hope?

The pattern of history shows that these eruptions of censorship are cyclical. I am hopeful that the library community in particular, and the society at large, are learning valuable lessons from this experience that we can apply the next time the cycle happens.

In sort of a broader, happier sense, one of the things that gives me hope is the kids. We didn’t get into this, but among the community that came out to support the right to read were a huge number of students who were the most passionate, persuasive, eloquent public speakers. To see the kids rise up and say, “No, these are my books, and you can’t take them away, because they’re valuable to me,” was beautiful.