Popular protests often erupt over a specific problem in a particular place. But from Lebanon to Hong Kong to Chile, a unifying force is emerging in protesters’ aspirations and their push to be heard.

NOVEMBER 7, 2019 - LONDON - It wasn’t just the time difference that kept me from streaming it live. When I woke up the next morning in a chilly London, I was still too nervous to risk a look at any news sites. Then I saw the email at the top of my inbox. I exhaled. I smiled. I laughed out loud. It was from my younger brother, back in the States, with a message he knew would be instantly understood. It was one word: “Wow!” 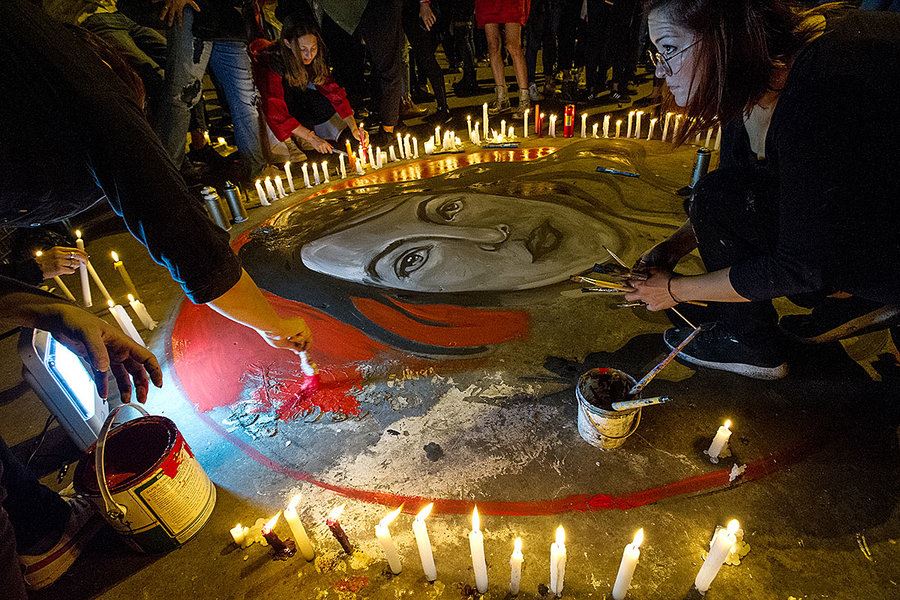 Protest artists in Beirut create a portrait of what they call “Strong Woman of the Revolution,” as thousands of women hold a candlelight rally against sectarian government and call for the removal of Lebanon’s entire political class in Martyrs’ Square, on Nov. 6, 2019.Scott Peterson/Getty Imagers/The Christian Science Monitor

Yet while savoring my joy in that victory and, through the power of 21st-century technology, sharing it with hundreds of thousands across my native Washington, America, and the world, I’ve been struck by something else as well: that this is about more than baseball. It is, in a deeper sense, about community.

And that may offer a window into a puzzle that politicians, professors, and pundits have been vying to unpick in recent weeks: the eruption of popular protests as far afield as Beirut and Baghdad in the Middle East; Hong Kong in Asia; Barcelona in Western Europe; and Santiago, Chile, in South America. That means focusing not so much on what policies or governments the protesters oppose, as on what they may be providing one another.

The political context of each is different. But in seeking to discern a pattern, commentators have rightly focused on similarities. A number of the protests have sprung up over ostensibly limited grievances: in Hong Kong, a law that would have allowed extradition to mainland China; in Beirut, a tax on WhatsApp messages; in Chile, an increase in subway fares. More broadly, government corruption, a lack of accountability, and disparities in wealth and opportunity have galvanized many of the demonstrations.

Yet it’s another link that many analysts have highlighted: the kind of protests that are mushrooming, and how they’ve been organized and replicated. The Financial Times coined a particularly apt phrase, calling them a “leaderless rebellion,” enabled, managed, and spread from country to country, through social media apps.

Where the international love fest around baseball’s new World Series champions may help is in explaining why, often in the face of daunting odds and overwhelming force, these protest movements appear to be growing. And why, in all likelihood, they’re not going away anytime soon.

On the geopolitical stage, things are in a period of flux not seen for decades. Alliances are under strain. The world’s most powerful country, the U.S., is disengaging. Trade wars are raging. World economic growth has slowed. And in an increasing number of countries, populism is on the rise while trust in government and other established institutions has eroded. One important result: uncertainty, even fear; a sense of being vulnerable, even powerless, and disconnected.

When you listen to the voices of demonstrators in nearly every one of the protests over the past few weeks, it’s impossible not to be struck by the importance they attach to feeling connected, part of a new community – despite, or maybe because of, the powerful odds arrayed against them. In Baghdad, drivers of the city’s ubiquitous three-wheel scooters, known as tuk-tuks, were a shunned underclass. Now, they’ve been embraced as heroes by fellow protesters. In Beirut – capital of a country whose past, and whose government, are defined by religious division – demonstrators of different faiths, different ages, and different backgrounds have similarly bonded.

None of that means the protests will achieve their ultimate aims, although concessions on the smaller, initial grievances have in fact been won. But with existing structures under strain, nationally and internationally, the surge in protest movements, without the defined leadership structure of the past, has provided a powerful new means of coming together, identifying, and belonging.

Hundreds of thousands of people descended on Washington, D.C., Nov. 2 for the Nationals’ victory parade. That demonstration was not about politics, at least not explicitly. But in the U.S., too, governing institutions are under pressure. The country is divided. Never, in recent decades, has the political climate seemed so toxic.

On the eve of the parade, The Washington Post asked readers to describe what the Nats’ victory had meant for them. A number of the replies spoke of pure joy – understandable for all of us masochistic enough to have waited, and irrationally hoped, for an achievement last notched by the Senators 95 years ago. But other answers touched on something more profound.

“The Nats are a link to my city, which feels so fragmented sometimes,” said one 28-year-old. “The Nats are a link to people in my community that I might not have much else in common with. At times, stepping into Nationals Park … even for a midsummer, midweek game, I feel I can breathe easier, being surrounded by people that just know me, even if we’ve never met.”