In Switzerland, a 161-year-old organization that champions animals

The Zurich Animal Protection Association lobbies to keep animals safe and manages its own shelter, which last year alone found homes for more than 400 furry friends.

NOVEMBER 18, 2017 - ZURICH, SWITZERLAND - Among the many aesthetically pleasing features in the historical center of Zurich, Switzerland, are the dozens of white swans that grace the Limmat River. 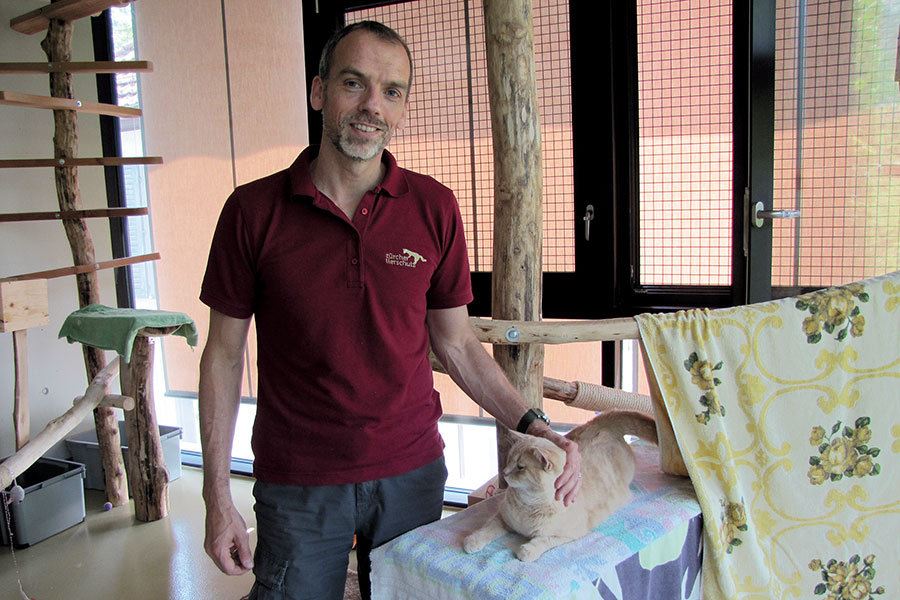 Rommy Los, chairman of the board for the Zurich Animal Protection Association, makes a cat feel at home at the organization’s headquarters in Zurich, Switzerland.David KarasWhile tourists and residents alike enjoy the sight of the stately water birds, few are probably aware that the swan population originated as a gift from a now-161-year-old organization as a means to encourage care for animals.

“The purpose was at that time to basically give the people an animal which they appreciate because of the beauty of the animal.... Now it is part of the picture of the city,” says Rommy Los, chairman of the board for the Zurich Animal Protection Association, which made the gift in 1870. “Before that, animals were used for a certain form of functionality.”

In 1870, Mr. Los explains, most animals indigenous to the landlocked European country were hunted or used for other utilitarian purposes. So bringing in swans from outside Switzerland was one way to sensitize the population to other purposes for animals.

Sensitizing is central to the work of the Zurich Animal Protection Association, which promotes the benevolent treatment of animals in Zurich and beyond. The nonprofit organization manages its own shelter, which opened in 1899 and last year alone found homes for more than 400 furry friends. It also offers educational programming and lobbies to protect animals.

“There is still a lot of pain which animals suffer from, purposefully and sometimes because [people] are not aware,” says Los, who has been at the helm of the association for four years. “And there is no one who protects them: They do not have a voice. You need to have people that protect them against other people.”

Los points out that often animals are exploited and harmed because of profit-motivated activities, the fur trade especially. The association has taken part in organized campaigns against the trade and is an advocate on behalf of animals in the context of pharmaceutical research.

In particular, the organization has championed the cause of animals with lawmakers, successfully leading to the first Swiss legislation dealing with their protection.

“Switzerland has one of the [strongest] animal protection laws worldwide,” Los says. But even though the association and others have made strides, work remains, he notes.

“You see the education of a culture or the level of cultural development if you look at the level of animal protection,” he says. “I think that Switzerland is very far ahead because of this, but nevertheless there is still a very high lack of knowledge, which gives a lot of room for improvement.”

The Zurich Animal Protection Association functions on an average annual budget of about 3 million Swiss francs (approximately $3 million), with 17 staff members. The vast majority of its funding comes from private contributions, including membership fees, donations, and estate bequests.

On a scorching day, Los spoke with the Monitor at the association’s headquarters, located just steps from Zurich’s popular zoo. There, the organization takes in strays, abandoned animals, and those collected by authorities, and it cares for them in a recently constructed, state-of-the-art facility.

“Every day more than one animal is coming and leaving,” Los says. “We alone get 7,500 calls a year from people who want something.... It goes through the whole range, from legal issues to whatever.”

Members of his team also check on the condition of animals in the community. They work with owners – and if need be the authorities – to resolve inhumane or unsafe conditions.

Leti McManus is one of the association’s supporters. For several years, she’s helped care and provide socialization for some of the cats in the shelter, while also using her network to increase the program’s visibility in the financial sector. In an email interview, Ms. McManus explains that she wanted to find a place to volunteer when she moved from London to Zurich.

The Zurich Animal Protection Association, she says, “sets the ultimate example in terms of what respect for animals means. I have visited many animal shelters around the world, including the ones in the United Kingdom, which are supposed to be extremely advanced, and have never seen one that has a higher skilled workforce and better living and healthcare conditions for the animals than [this organization].”

She also discusses the reach of the organization. “They are consulted by the administration of the Canton of Zurich in all issues concerning animal welfare,” she says, adding that the association’s campaign against the fur trade resulted in a major Swiss chain of department stores ceasing to sell fur.

A desire to give back

As for Los, working for the Zurich Animal Protection Association was a natural fit. He grew up watching his father balance a corporate career with family time and work on a farm. As Los pursued his own career and found success as an international marketing director, he and his wife would travel to Africa to spend their vacations volunteering at animal shelters.

When he returned to Zurich with his wife, he wanted to find a job in the nonprofit sector.

“It was this internal desire to give something back,” he says, noting how fortunate he considers himself to have his current job working with and supporting animals. “It is great to be able to do a job you like, and to have the feeling you do something good.”