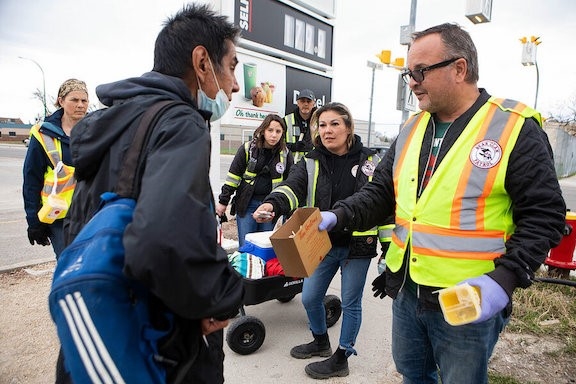 Volunteers Lorn Proutt (right) and Melissa Spence (second from right) hand out candy and food to an Indigenous man during a Bear Clan Patrol nightly walk on May 11, 2022, in Winnipeg, Manitoba. Volunteers and staff with the Bear Clan Patrol walk this North End neighborhood picking up discarded drug needles and handing out food.Melanie Stetson Freeman/Staff

It might seem a small gesture: two women asking a third how she’s doing. But in Winnipeg’s North End, where a hub of Indigenous activism addresses the many social problems that exist here, such interaction really can mean life or death.

So when Melissa Spence and Rose Fontaine, members of the Bear Clan Patrol, an Indigenous-led community safety group, see a woman stumbling in the street, they run to her. They run like she might slip away if they don’t get there in time.

The questions they ask – Is she hurt? Is someone hurting her? Is someone looking for her? – are the same ones they find themselves asking every night. And it is in this way they help tackle one of Canada’s greatest social problems: the disproportionate number of murdered and missing Indigenous women and girls (MMIWG).

The main aim of the Bear Clan, which stands out in its bright neon vests and bear patches, is to shore up a sense of safety and well-being, with community members often leery of a justice system that has so often abused them. The group sees itself as “block parents,” as Ms. Spence puts it. Composed of people who’ve had their share of struggle in life, they say it is driven by the kind of compassion and nurturing that’s so often missing for the urban Indigenous population of the Manitoban capital. 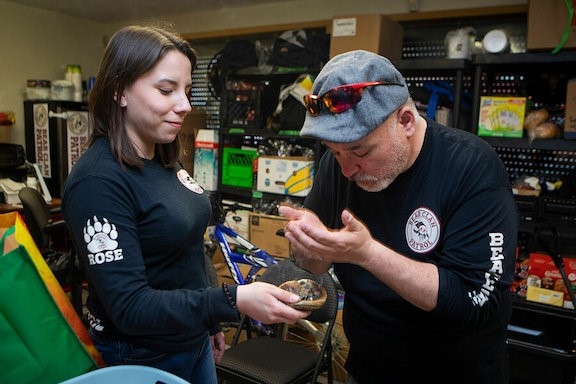 Melanie Stetson Freeman/StaffRose Fontaine, youth patrol leader, and Kevin Walker, interim executive director of the Bear Clan Patrol, smudge before one of their nightly walks, on May 11, 2022, in Winnipeg, Manitoba.

This woman this night is OK. Often they aren’t.

According to federal statistics, Indigenous women and girls are 12 times more likely to be murdered or missing than any other woman in Canada – and Winnipeg is considered ground zero of the problem. Winnipeg has Canada’s largest urban Indigenous population, with about 92,000 out of a population of 750,000.

It’s led to a flourishing of bright Indigenous culture that’s visible across the city. But Canada’s dark colonial legacy and violent assimilationist policies like residential schooling have also created a host of problems. The rates of Indigenous poverty and children in welfare – which ties directly to violence experienced later in life – are some of the highest in the country.

The Bear Clan Patrol, in its original conception, began in the 1990s, just as the victimization of Indigenous women was coming into broader consciousness in North America. That group petered out. But in 2014, the death of 15-year-old Tina Fontaine, whose tiny body was found in the Red River, sparked a social movement. The girl had interfaced with several service providers before her death, underlining to many that institutional Canada had neither the resources, nor the trust of the community, to protect the most vulnerable Winnipeggers. The Bear Clan revitalized.

Rose Fontaine, who now works for the Bear Clan Patrol after joining as a volunteer, was Tina’s cousin and best friend, the two only four months apart in age. “If Bear Clan had been around in 2014, I think she would have gotten better help,” says Ms. Fontaine, who recalls her cousin’s bravery and their mischievous adventures. Tina had come to Winnipeg from her reserve to reconnect with her mother, but was left disappointed and fell into trouble on the streets of the city. With the main suspect acquitted, the death remains unsolved. “I feel like Bear Clan would have taken care of her. She was just looked at as a statistic, not a human. But Bear Clan comes across everyone as people and community members. We love everyone.”

“I remember my [aunt] said, ‘Tina died so that other youth can get help.’ At first I didn’t understand it. Now I do.” 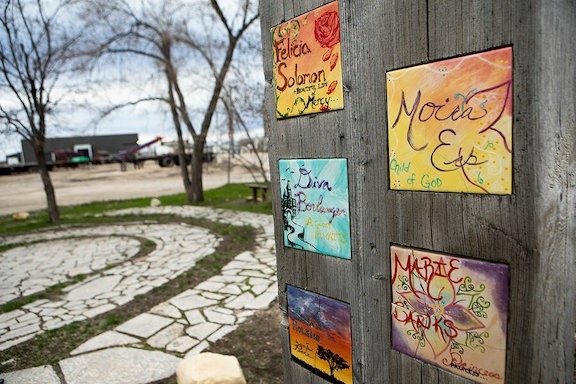 Melanie Stetson Freeman/StaffThe Memorial Garden, in the North End of Winnipeg, is dedicated to missing and murdered Indigenous women. Some of their names are on handmade tiles affixed to wooden pillars.

“Any hour of the day, no discrimination”

The Bear Clan Patrol suits up on a recent night. They nestle sandwiches, fresh fruit, granola bars, and water bottles into a little black wagon, as well as naloxone kits in case they encounter an opioid overdose. They strap receptacles over their shoulders to pick up syringes – they collected 11,000 between September and December. They perform a smudge ceremony and then head out the door at 6 p.m. sharp.

They’ve expanded their services in the city to three neighborhoods. They also offer a daily food pantry and run a youth patrol on weekends to teach children social responsibility. Other Bear Clans have formed across Canadian cities. Many non-Indigenous city members have joined their patrol. Two on this night have shown up for the first time as part of Reconciliation work they do with their church.

“Community members are more likely to talk to us on issues than engaging with the police,” says interim Executive Director Kevin Walker, who leads patrols five times a week. “Everybody that walks has their own reasons. For me, it’s all about community.”

The reality of MMIWG is never distant. Red dresses hang in several windows: a sign for vulnerable women that they can knock on that door “any hour of the day, no discrimination,” says Mr. Walker.

Tina’s death spurred calls for a national report on MMIWG that came out in 2019. Among its findings was a call to “expand and legitimize community-based security models, such as local peacekeeper officers, or the Bear Clan Patrol program based in Winnipeg.”

The Bear Clan also works directly with the Winnipeg police, receiving notifications about those missing. They will then talk with the families to get more information and carry out poster campaigns to lead them to victims. “They observe everything, especially street people,” says Ms. Fontaine. 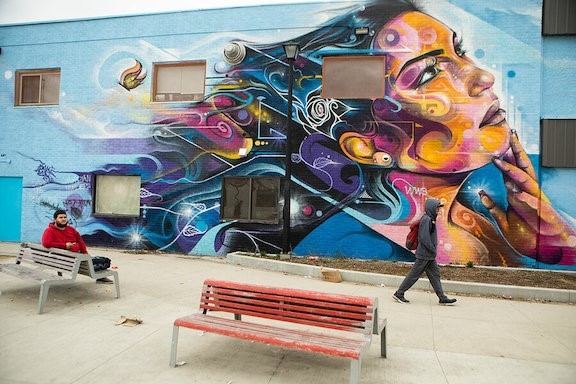 Melanie Stetson Freeman/StaffA mural of the late teenager Tina Fontaine fills the side of a building in the North End of Winnipeg, Manitoba, on May 11, 2022.

During a recent patrol, the group stops in plazas – at one, a rendering of Tina is painted in a bright purple and blue mural – to hand out food. Children run down the street after them. They head to the rail tracks – historically a center of sex trafficking, where a makeshift memorial to MMIWG is set up – and then a bar-lined main street that is often the diciest of the 6-mile patrol. The group of 10 volunteers is out of food after 90 minutes.

At one point they cross paths with the Mama Bear Clan, another, female-led community patrol group. A woman on a bike rides past shouting, “Bear Clan, I love you guys.”

“There was this kind of rising of people responding to this tragedy of Tina Fontaine,” says Cora Morgan, whose job as family advocate at the Assembly of Manitoba Chiefs was also created after Tina’s death.

Ms. Morgan testified during the MMIWG inquiry, urging policymakers to include the issue of child welfare as part of the cycle of violence besetting women. In Manitoba, Indigenous children comprise about 90% of children in state care, one of the highest per capita rates in the country. “The most violent act you can commit against a woman is to steal her child,” Ms. Morgan says. A census analysis published last month in Juristat showed 81% of Indigenous women previously in the child welfare system had been physically or sexually assaulted in their lifetimes.

Many Bear Clan Patrol members understand the pain on the streets firsthand. Ms. Fontaine, like her cousin, spent a lot of her childhood in state care. Ms. Spence joined the group after her brother killed himself. She found the patrol a source of healing after being in a “dark place,” she says. 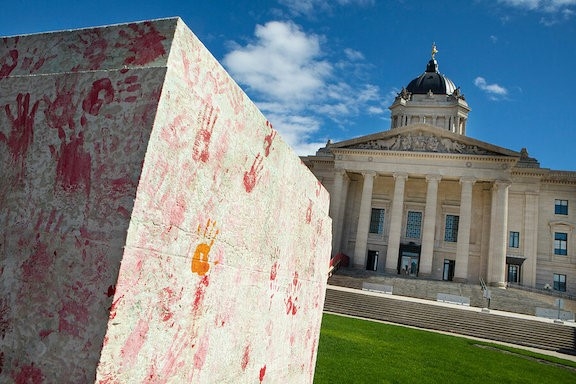 Darryl Contois, who is volunteering with Bear Clan this night, runs his own organization to search for missing persons, called the Evelyn Memorial Search Fund. He often combs the streets at 3 or 4 a.m. for missing persons, he says. “I have a sister; she’s a meth user. I always try to convince her to change her life, but I can’t force her. But I always worry about her, and worry that one day I get that call,” he says.

“That girl who is lost, doesn’t have no one to help her. I said if I could make one difference in one person’s life, then I made a difference.”

Mr. Walker, who struggled with addictions for years, describes their community-building simply: “We meet them where they are at.”